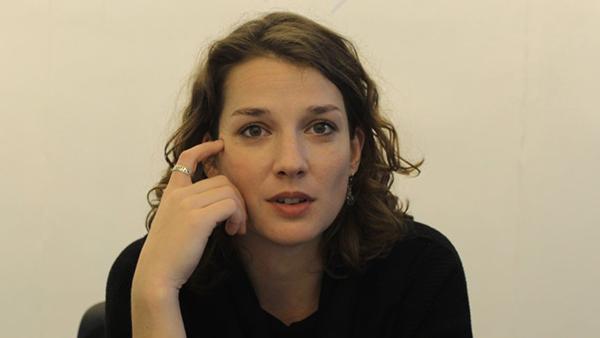 Up to 13 million tons of plastic wind up in the ocean each year. German architect Marcella Hansch has developed a platform designed to remove that waste from our seas. But it wasn’t something she planned.

Marcella Hansch is afraid of fish, but she loves diving nonetheless. When fish swim toward her, she begins breathing more rapidly, which causes her oxygen tank to empty a bit more quickly. But during a 2013 dive in Cape Verde, the island nation in the Atlantic Ocean, it wasn’t a fish that alarmed her, it was a plastic bag. And it led to Hansch’s idea for her university thesis project — a concept that could ultimately solve one of our planet’s biggest environmental problems.

At the time, Hansch was studying architecture in Aachen, though she says she wasn’t a particularly accomplished student. But her underwater encounter left a lasting impression. Each year, tons and tons of plastic waste winds up in the ocean, the 31-year-old says. “If this continues, there will be more plastic in the ocean by 2050 than fish,” she says. For her project, she set out to conceive a platform that would filter plastic waste from the water. “I wanted to do something that would be really fun for me,” she says.

Thesis projects are generally not ever implemented. But Hansch’s project may have a future. Currently, an entire team is participating in an effort to bring it to life. Hansch says it would have been a shame for her idea to just disappear into a filing cabinet after graduation.

Plastic garbage in our oceans is one of the most challenging environmental problems of our time. Oceanic researchers estimate that between 4.8 and 12.7 million tons of plastic waste wind up in the world’s oceans and seas each year. And plastic doesn’t biodegrade easily, if at all. The lifetime of a simple plastic bag may only be a few weeks, but it is estimated that a plastic bottle survives for as long as 450 to 500 years in the ocean. Such pollution has a negative impact on the ecosystems of our seas and oceans — and on animals and humans.

Through exposure to salt water and sunlight, plastic waste is broken up into tiny particles. These so-called “microbeads” are frequently ingested by fish, thus introducing them into the food chain and, ultimately, to humans. Studies suggest that up to one-third of all fish are affected. And it is exactly this trend that Hansch wants to do her part to stop.

The Challenge of Recycling

She becomes quite animated when explaining how her project slowly started to take shape and how it became increasingly scientific — even though she says she is “more of an artistic person” and never really had much of a scientific bent. For this project, though, Hansch dared to go far beyond the boundaries of her own field of study. She attended lectures on engineering, calculated ocean currents and learned about different types of algae. The result was a system that functions as a closed loop and produces no waste at all.

Microbeads, also known as microplastic, is lighter than water so it tends to be found at or near the surface, though ocean currents can drag the bits of plastic as deep as 30 meters (100 feet) beneath the surface. Hansch’s calculations indicated that a bulbous shape and a system of underwater channels would calm the ocean currents, allowing the plastic particles to rise and be skimmed off by the platform.

Hansch speaks quickly and gesticulates constantly with her hands as she explains her idea. She has presented her concept countless times in recent years — at her university, at conferences and in front of scientists. “The molecular structure of the plastic pieces that are filtered out of the water have been destroyed by salt water and cannot be reasonably recycled,” she says. But Hansch still wanted to find a way to use the waste.

Her original plan called for the plastic waste to be run through a plasma gasification process to convert it to hydrogen and carbon dioxide. The hydrogen could then be used as an energy source for the fuel cells that power the platform. Meanwhile, the carbon dioxide could be used as a nutrient for the algae cultures grown on the platform. The algae biomass would then serve as the raw material for environmentally friendly, algae bioplastics.

While she kept the idea of a closed loop, not all of Hansch’s approaches proved to be realistic. The idea of plasma gasification has since been abandoned. “It wouldn’t have worked,” she says. Her team of researchers is currently investigating other possible solutions. “But even those should create hydrogen and carbon dioxide,” Hansch says, adding that the search for a practicable solution is ongoing.

A Groundswell of Support

“Does that make sense?” Hansch asks after she finishes her explanation. It does — a conclusion that was shared by all the friends and fellow students she told about her project during the six months she initially spent working on it. They also convinced her to continue pursuing the idea after she finished her studies.

After graduating, Hansch began her career as an architect. During her lunch break one day, she visited the Institute of Hydraulic Engineering and Water Resources Management at RWTH Aachen University, where she presented her project. “I thought they would surely laugh at me,” she says. “This isn’t my area of expertise.” But nobody laughed. Instead, there was widespread interest in Hansch’s proposal.

It was followed by invitations and the institute called on other students to do related thesis papers that could help Hansch advance the project. More and more people became involved.

For a long time, though, no real progress was made. At one point, Hansch even came close to throwing in the towel, but then she agreed to give one last presentation. It could have been the last speech she ever gave on the subject, but during the delivery, she had an epiphany and realized just how important it had become to her. “It became clear to me that I couldn’t just leave it behind,” she says.

A short time later, Hansch and her fellow campaigners started a non-profit organization called Pacific Garbage Screening. The roughly 35 members of the NGO, including engineers, environmental scientists and biologists, are working towards the day when the platform can finally be deployed. They perform research on a voluntary basis and cover most of the costs out of their own pockets.

The university in Aachen continues to provide support for the project. Thesis papers are regularly written that contribute to the project’s research foundations. A postgraduate position has also been funded by UBA, the German government’s environmental protection agency. In 2016, Hansch and her team won the German Federal Ecodesign Award for the project, a prize awarded by UBA and the Environment Ministry. During the award speech, UBA Vice President Thomas Holzmann praised the project as being “both visionary and solution-oriented.”

‘There’s Enough Plastic in the Ocean for All’

There are several projects around the world pursuing goals similar to Hansch’s. In the Netherlands, for example, Project Ocean Cleanup is hoping to begin fishing plastic out of the ocean later this year. Hansch says she doesn’t view these other projects as competition. “There’s enough plastic in the ocean for everyone,” she says. Plus, the different teams talk and share ideas, allowing them to learn from each other. Still, her project is the only one that is focused specifically on microplastics, she says.

It’s likely going to be awhile yet before Hansch’s platform can be put to use. Some fundamental questions still need to be answered — how large the platform needs to be and how much waste it can remove each year, for example. There are plans to build a prototype in the next few years and to place it at the mouth of a river. To ensure that the project can continue to advance, Hansch has also cut back her working hours at her main job. On any given week, she finds herself working up to 60 hours at her nonprofit.

“Of course, I can’t go on doing this forever, but it’s OK right now,” she says. “It gives me a lot of energy.” Although she says it’s difficult to set a schedule for the project, she hopes that all the research underpinning it will be completed within the next five years.

This year, Hansch plans to actively recruit sponsors. “I’m an absolute idealist,” she says. As such, companies in the packaging industry would only be considered as partners, she says, if they also changed their practices. “We don’t accomplish anything if we pull everything out on the back end while trash is still being dumped into the water on the front end,” she says.

Hansch says she is also taking pains personally to produce less waste. “I don’t run around lecturing people, but I do use humor to try to point a few things out.”