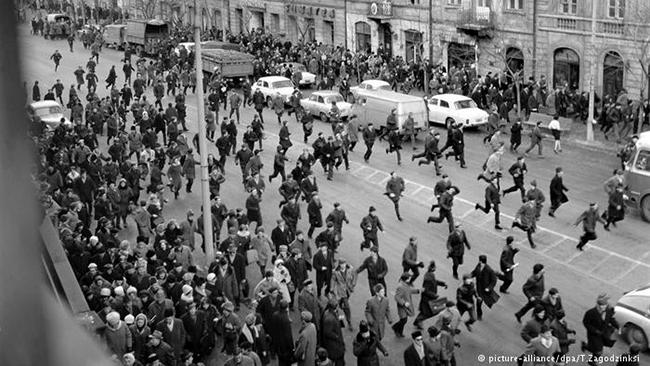 In 1968 the Polish Communist party declared thousands of Jews enemies of the state and forced them to leave Poland. On the campaign’s 50th anniversary, historians and witnesses warn of a revival of Polish anti-Semitism.

Jozef Lebenbaum was a reporter with the Workers’ Voice newspaper in Lodz, Poland’s second-largest city, when he was forced to leave the country in August 1968. The reason: he was Jewish. Anti-Semitism was ablaze back then in Poland, and the regime sought various, often absurd, excuses to get rid of the Jews.

He was 38 at the time, in the middle of his career, Lebenbaum tells DW. “Suddenly, my work was gone, my colleagues, my apartment, and the Polish culture I had grown up with,” he remembers.

An anti-Semitic wave forced about 20,000 Jews from Poland to leave the country between 1968 through the end of 1972. It peaked for the first time on March 8, 1968, when Warsaw police beat up students protesting state censorship and repression of critical fellow students. The student leaders were branded as Zionist and anti-Polish as state-controlled anti-Semitic agitation began to spread across the country.

The authorities organized mass demonstrations in which Jews who held prominent official positions were accused of everything that was wrong with the ailing Communist system. “Zionists to Zion,” people yelled at party conventions, the aim being to send the country’s Jews — regarded as anti-Polish — to Israel.

Lebenbaum was accused of making pro-Israeli comments about the 1967 Arab-Israeli Six-Day War. “My point of view was in accordance with international law and not with Warsaw’s propaganda at the time — Warsaw had sided with the Arab states,” Lebenbaum says. The accusations were just a pretext to get rid of him, a Jew, he adds. And the reporter wasn’t the only one: all Polish Jews stood accused of being pro-Israel.

‘It was the Communists’

But Poland is not to blame for the anti-Semitic purge, according to Polish Prime Minister Mateusz Morawiecki. Poland didn’t even exist in 1968, he said during a recent state visit to Germany. “It was the Communist regime that treated the Jews so badly back then,” he said, trying to explain that the system in power in Poland from 1945 to 1989 was forced on the Polish people by the Soviet Union.

The Polish parliament is currently discussing a draft resolution saying that Communists bowing to the Soviet Union were behind the anti-Semitic purges. “The Communist rulers who initiated the anti-Semitic protests in 1968 did not represent the interests of the people, but rather Moscow’s interests,” the draft resolution by Jan Zaryn, a Law and Justice (PiS) senator and Polish historian, says.

The 50th anniversary of the mass expatriation of Jews from Poland coincides with the present-day controversy surrounding the new Holocaust law. It criminalizes suggestions that Poland bears responsibility for Nazi crimes in the country. Israel, the US and Polish historians fear that it could lead to a complete denial of Polish crimes against their fellow Jewish citizens during WWII.

The Holocaust debate has triggered a new wave of anti-Semitic agitation in the media and the internet, says Dariusz Stola, the director of the Warsaw-based Museum of the History of Polish Jews. There are similarities to the anti-Semitic slogans and lies perpetrated in 1968, Stola told DW. Comments on social media include, “The Jews and Israel have the liberal lobby in Brussels on a leash,” and “Too bad, that not all Jews emigrated in 1968. Now they are showing off again.”

The resonance to present-day events is personally upsetting for Lebenbaum. “It makes me sad to see people revive anti-Semitic slogans,” he says, adding it reminds him of 1968.

Having to leave Poland was a “personal tragedy,” Lebenbaum says, but he had no choice as “enemies of the state” wouldn’t have found jobs in Communist Poland. Ironically, many of the Jews forced out defined themselves first and foremost as Polish citizens, not Jews. “I always had a Polish identity, and never split people in Jews and gentiles,” Lebenbaum argues.

Unlike many Jews forced to leave decades ago who never returned to Poland, Lebenbaum couldn’t forget his Polish roots. In the 1990s, he seized a new chance to get a Polish passport and returned to his native Warsaw. The anti-Semitic comments pain him, but he would never again leave Poland, he says. “I was never angry at Poland as a country,” he says.