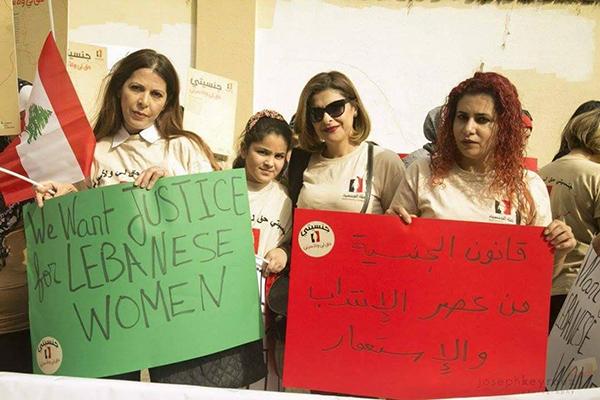 The family of a Lebanese woman married to a non-Lebanese man and living in Lebanon has to face the economic burden of not benefiting from any governmental support.

BEIRUT: After getting married to an American citizen at the age of 20 and living a few years in the U.S. to complete her studies, Nadera Nahas, mother of a 5-year old decided, in 1995, to return to her home country Lebanon with her family.

Her excitement turned to utter disappointment when she discovered that her son cannot enter the country without a visa.

This event, according to Nahas, was but the start of the struggle of a Lebanese woman married to a non-Lebanese man.

In Lebanon, her husband, who’s an engineer, failed to find a job; considering that he does not have the Lebanese nationality and could not join the Lebanese Association for Engineers.

As a result, he had to be away from his family in order to provide for them; and so, In 2001, he traveled to Saudi Arabia.

Regardless, Nahas was still under the pressure of providing the perfect life for her now two sons; making sure to renew their papers and passports every 3 years, paying for her kids’ insurance because the government doesn’t, and trying to answer her sons’ question: why aren’t we Lebanese like all our friends?

Nahas’ children grew up and her struggles grew with them.

Her eldest son studied Medicine at the American University of Beirut and got married to a Lebanese doctor, with whom he later traveled to the U.S.

Her younger son is a Business graduate also from AUB. He traveled to Dubai because regulations made it difficult for him to work in Lebanon.

According to ‘Predicament of Lebanese Women Married to Non-Lebanese Men,’ the research issued in 2009, Nahas’ case is only one in around 77,000 cases of Lebanese women who are married to non-Lebanese men and enduring hardships while living in Lebanon.

Issued in January 1925, the Lebanese Nationality Law presents specific regulations for the transmission of the Lebanese nationality.

Those regulations, that still exist to this day, follow articles 1, 2, and 10 of decree number 15 of the Lebanese Law.

According to article 1 of decree 15, a person is considered Lebanese only if they have a Lebanese father.

This law contradicts the Lebanese Constitution that devotes the principle of non-discrimination between Lebanese citizens, since in this case Lebanese women are being discriminated against.

It also falls against article 15 of the Universal Declaration of Human Rights that states that “everyone has the right to a nationality.”

The Lebanese government states two reasons for not allowing women to pass their nationality.

The first reason is the government’s fear of a demographic imbalance in the country.

Karima Chebbo however, the Coordinator and Responsible of the Legal Unit of the Campaign: My Nationality is a Right for Me and My Family, rejects the claim by saying that it is only a “false argument.”

“If this is the case, then how do Lebanese men pass their nationality to their non-Lebanese wives?” said Chebbo, while “keeping in mind that men in some cases are allowed to marry four.”

Chebbo stresses that this law, specifically this part of the claim, only bans women from their basic rights, degrades them, and reflects our ‘consecutive government.’

The research ‘Predicament of Lebanese Women Married to Non-Lebanese Men’ shows the number of registered marriages of Lebanese women to non-Lebanese men in different sects. Those numbers do not reflect the demographic imbalance the government talks about.

This creates a balance in ratio between Muslims and Christians and proves the government’s claim wrong.

Futhermore, the family of a Lebanese woman, married to a non-Lebanese man and living in Lebanon, has to face the economic burden of not benefiting from any governmental support.

“The government does not cover any expenses related to my children,” Hanadi Nasser, wife of a non-Lebanese man and mother of four children, said. “These expenses include schooling and hospitalization, which means that we have to pay for insurance,” she added.

On the kids’ level, children of Lebanese women and non-Lebanese fathers not only view themselves as inferior, but also the government treats them as such, according to Chebbo.

“I was not accepted in the Lebanese University media department only because there are no places for non-Lebanese students to join,” Mohamed Motaweh, the son of a Lebanese woman married to a Syrian man, said. “I had to join a university I do not really like because of that.”

Chebbo finds it upsetting how these aspiring children enter the real world with big dreams, only to be told that they cannot be doctors, engineers, among other professions.