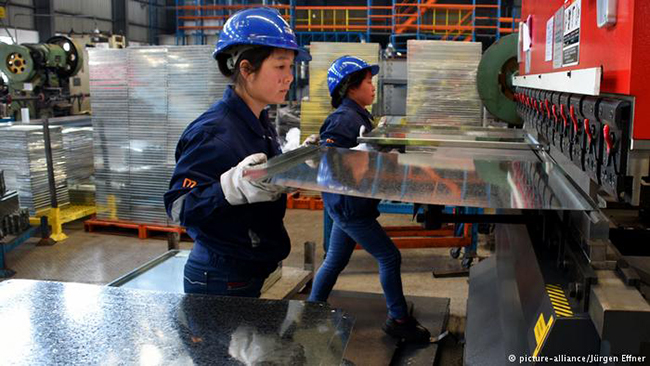 The US will reportedly spare Mexico, Canada and possibly others from tariffs, under national security “carve-outs.” The tariff bill will likely be signed on Thursday or Friday and will go into effect two weeks after.

The White House announced on Wednesday that steel and aluminum from some countries could be exempted from the tariffs proposed by US President Donald Trump. The Washington Post and Reuters news agency later confirmed that Canada and Mexico would recieve a 30-day exemption. The announcement represents a reversal to Trump’s previous pledge of imposing the tariffs without exceptions.

The move comes after a week of sharp reactions to the president’s tariff plan from congressional Republicans, the US Chamber of Commerce and US allies across the world.

White House Press secretary Sarah Huckabee Sanders said earlier on Wednesday that the potential exemptions would be made on a “case by case” and “country by country” basis. “There are potential carve-outs for Mexico and Canada based on national security and possibly other countries as well, based on that process,” Sanders explained.

A few hours later, The Washington Post reported that the White House planned to apply the 30-day exemption to the two neighboring countries, citing Trump administration officials. The exemption could be extended if “progress” was made during the renegotiation of the 1994 North American Free Trade Agreement (NAFTA).

US Treasury Secretary Steve Mnuchin had indicated earlier this week that Canada and Mexico could be exempted from metals tariffs on the condition that talks to renegotiate NAFTA were “successful.”

Trump doubled down on his commitment to tariffs on Wednesday in a Tweet, citing the job losses and trade deficits that the US has incurred for nearly two decades.

Earlier this week, Trump reaffirmed his belief in the importance of the US steel industry and its relation to national security. “There’s a theory that if a country doesn’t have steel, it doesn’t have a country. And it’s true,” Trump said. “So this is more than just pure economics. This is about defense. This is about the country itself.”

Trump is expected to sign the presidential proclamation establishing the tariffs during a ceremony scheduled at 3:30 PM local time (2030 GMT) on Thursday, according to a White House source.

A senior US official told Reuters that the tariff measures would take effect about two weeks after Trump signs the document. It remains unclear whether the proclamation would include a list of countries that could be exempted or details in general about the exemption.

Conflict with the EU and China

Trump’s tariff announcement has drawn a sharp rebuke from the European Union. EU Trade Commissioner Cecilia Malmstrom on Wednesday announced  a three-pronged reaction to the US tariff plan, which consisted of contesting the tariffs in the World Trade Organization (WTO), imposing additional tariffs on certain American exports to rebalance US trade and implementing safeguards to protect the EU from a surge of aluminium and steel products diverted from the US.

Malmstrom referred to Trump’s national security reasoning as a “deeply unjust” pretext for tariffs. “We cannot see how the EU, friends, allies in NATO, can be a threat to security in the US,” she said.

Trump maintained a strong stance against the EU on Tuesday, when he accused the block of “very, very unfair” trade. “They make it almost impossible for us to do business with them, and yet they send their cars back to the United States,” Trump said. “If we tax them 25 per cent, believe me, they won’t be doing it for long.”

China condemned the tariffs, warning that it was prepared to deliver an “appropriate and necessary response.” During a press conference, Foreign minister Wang Yi insisted that a trade war would help no one.

“Choosing a trade war is surely the wrong prescription, in the end you will only hurt others and yourself,” he said.