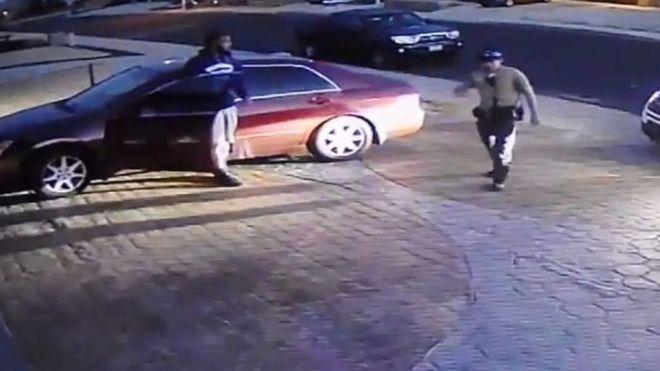 A 14-year-old California boy has been arrested for allegedly posing as a sheriff’s deputy while driving a car with emergency lights, police say.

The teenager allegedly pulled over a car, and after “obtaining the female’s information he gave her a warning and let her go”, California police said.

He also allegedly visited two homes, claiming to be responding to a domestic disturbance call.

He was later detained while driving a vehicle owned by his great grandmother.

The San Bernardino County Sheriff’s Department said the teenager, who has not been identified due to his age, had mounted red and blue flashing lights to the windscreen of his great-grandmother’s Ford Explorer SUV and wore what appeared to be a real handgun.

He was arrested on Tuesday at the High Desert Juvenile Detention Center, according to the Victorville Police Department.

In addition to stopping at least one driver on Monday night, the boy also allegedly visited a home and told its owner he there to investigate a “reported domestic disturbance,” according to a police press release.

The boy was told there had been no call, and then tried to open the locked door after homeowner had closed it on him, according to police.

“For me, I was like, ‘That’s not normal. Do cops do that?'” Jasmine Jones, who lives at the residence, told KTLA-News.

“I saw the police uniform and I thought, ‘That just doesn’t look right,'” she said.

“It’s loose, and the belt buckle isn’t staying on his hips.”

He also allegedly visited another home and activated his lights, causing a 16-year-old boy to leave his home.

He again claimed to be investigating a domestic disturbance and left after being informed there had not been a call, police said.

During a later search of the boy’s home, investigators said they discovered a San Bernardino County Sheriff’s Department uniform he allegedly wore.

The boy was already on probation, and has now been booked into the High Desert Juvenile Detention Center.