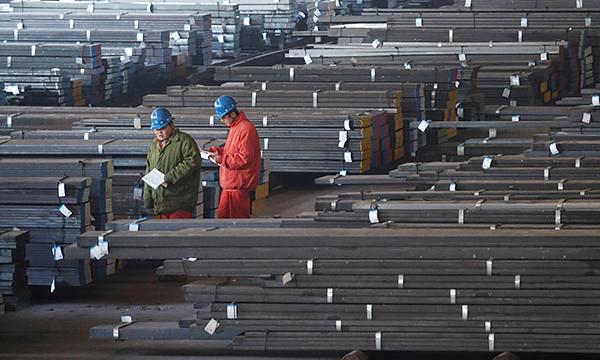 Japan said the move would have a “big impact” on the countries’ close bilateral ties, while China said it was “resolutely opposed” to the decision and South Korea said it may file a complaint to the World Trade Organization.

Trump on Thursday pressed ahead with the imposition of 25 percent tariffs on steel imports and 10 percent for aluminum on Thursday, though he announced exemptions for Canada and Mexico, and said exceptions could also be made for other allies.

China, which produces half the world’s steel, will assess any damage caused by the U.S. move and “firmly defend its legitimate rights and interests,” the country’s Ministry of Commerce said.

The tariffs would “seriously impact the normal order of international trade,” the ministry said.

Trade tensions between China and United States have risen since Trump took office. China accounts for only a small fraction of U.S. steel imports, but its massive industrial expansion has helped create a global glut of steel that has driven down prices.

China’s steel and metals associations urged the government to retaliate against the United States, citing imports ranging from stainless steel to coal, agricultural products and electronics.

It was the most explicit threat yet from the country in an escalating trade spat.

The dispute has fueled concerns that soybeans, the United States’ most valuable export to the world’s second largest economy, might be caught up in the trade actions after Beijing launched a probe into imports of U.S. sorghum, a grain used in animal feed and liquor.

“The cost of a trade war will be tremendous and it will make everyone unhappy,” Junichi Makino, chief economist at SMBC Nikko Securities in Tokyo, said in a report on Friday.

Trump’s declaration coincided with the signing by 11 countries of a new Trans-Pacific trade pact that the United States withdrew from last year.

Japan, South Korea said they would seek exceptions, as did Australia.

Prime Minister Malcolm Turnbull sounded confident of getting favorable treatment as Trump spoke of Washington’s strong relationship with Australia, a major exporter of iron ore but exports little steel and the United States was not a major customer.

“I was pleased to see the president acknowledge the strong points I have been making to him. There is no case for imposing tariffs on Australian steel,” Turnbull told reporters in Sydney.

The European Union, Brazil and Argentina said overnight they should not be targeted or would seek exemptions.

“Higher tariffs will increase costs for Hyundai and Kia putting them at a disadvantage compared with their rivals in the United States,” a senior South Korean trade ministry official told reporters in a background briefing, referring to Hyundai Motor (005380.KS) and Kia Motors (000270.KS).

The South Korean official said the tariffs would impact the renegotiation of the bilateral free trade deal with the United States that is currently underway.

In South Korea, shares in Posco 0054900.KS were down more than 3 percent, while in Tokyo Japan’s biggest steelmaker Nippon Steel & Sumitomo Metal (5401.T) was down slightly.

Chinese steel futures slumped to their weakest level since November.