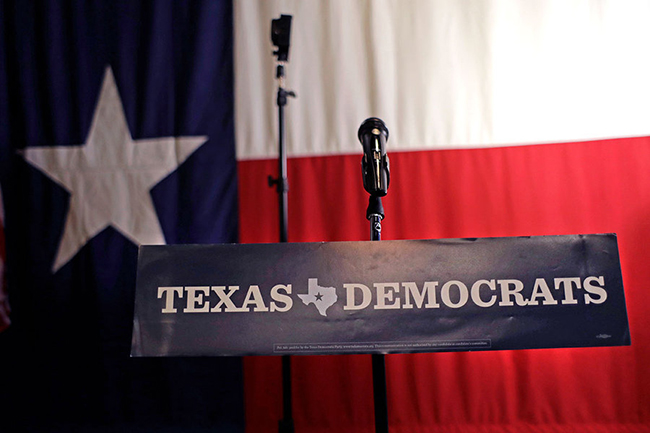 Tuesday’s primaries brought a show of enthusiasm among Democrats in the Lone Star State not seen in years. But it still may not be enough for them to win a single statewide race.

MARCH 8, 2018  SAN ANTONIO, TEXAS—More than 1 million Texans voted in the state’s first-in-the-nation Democratic primary, in a show of enthusiasm not seen here for decades. Fernanda Hernandez was one of them, dashing to a polling site in south San Antonio during a work break on Tuesday. Her 18-year-old sister and her friends were all planning to vote as well, she said.

So, could this be it? Could the long-predicted shift from red to blue in Texas finally be happening?

To be sure, Texas Democrats could be looking at one of their most successful midterm elections in decades. There are Democratic candidates contesting every congressional race for the first time in years. And President Trump’s approval rating is lower in Texas – 39 percent – than any other Republican state, according to Gallup.

But those looking for early signs of an anti-Trump “blue wave” sweeping the country may have to look elsewhere. In Texas, it may be little more than a blue ripple.

Any coming wave is “likely to show itself much more starkly in other states around the country that are more purple rather than deep-red,” says Cal Jillson, a professor of political science at Southern Methodist University in Dallas.

Indeed, Democrats could have their most successful midterm here in years – in a state with very few contested congressional districts, they have a legitimate chance to win three – but still fail to win a single statewide race.

The biggest reason for that is that Democrats remain at the most literal of disadvantages. Tuesday’s primary saw more Democratic voters – a little more than 1 million – than they’ve had since 1994, coincidentally the last year a Democrat won statewide in Texas. But they were still outvoted by the 1.5 million Republicans who went to the polls – that party’s best showing since at least 1970.

This decades-long run as the Harlem Globetrotters of Texas politics has allowed the GOP to develop some strong institutional advantages.

“Republicans have not lost a statewide race in Texas since 1994,” says Professor Jillson. That kind of dominance means “voters are used to supporting your candidates, you’ve got a fully blown-out campaign organization, and you’ve got deep fundraising experience – and the other side has none of that.”

That imbalance is starkly exemplified in the governor’s race. Gov. Greg Abbott (R) has been running statewide since he was a state supreme court justice in 1998, and since becoming governor in 2015 he has raised $41 million for his re-election campaign. His Democratic challengers, Lupe Valdez and Andrew White – who will face off in a May run-off – have raised $600,000 between them.

Even when Democratic candidates are able to compete financially, building name recognition can be a challenge. Rep. Beto O’Rourke, a Democrat from El Paso who is challenging Sen. Ted Cruz (R), has been handily outraising his opponent and has visited 224 of the state’s 254 counties – but an October 2017 poll found that almost 70 percent of voters didn’t know who he was.

Controlling all branches of the state government has also allowed Republicans to consolidate their advantage by redrawing district maps. Federal courts have invalidated on three separate occasions parts of the map the state Legislature drew in 2011, after the 2010 Census, most recently last August when a three-judge panel ruled that two congressional districts – one held by a Republican and one held by a Democrat – constituted “an impermissible racial gerrymander.” (The US Supreme Court will hear a challenge to that decision in April, and could order the districts to be redrawn before the November election.)

This Republican dominance in the state “makes it difficult to recruit high-quality candidates for many races, and it makes it hard to convince donors to commit serious dollars to build a Democratic party,” says Mark Jones, a political scientist at Rice University in Houston.

“Even many Texas donors who are progressive prefer to send money out of the state to races where they think they could have more influence,” he adds.

False dawns have not helped Democrats here. There was similar excitement in 2014 around Wendy Davis, who was running for governor after a highly publicized filibuster against new abortion restrictions in the state. She raised nearly $40 million but still lost to Governor Abbott by 20 points.

There are signs, however, that Texas Democrats could be moving out of their Washington Generals phase (to continue the Harlem Globetrotters analogy), according to Professor Jones.

“One way to look at this is Democratic enthusiasm leading more voters to turn out – but another is, it’s encouraging very talented individuals to run for office as Democrats, who in previous cycles did not run,” he says. Even if many of those candidates wind up losing, “they’ll have experience [and] name recognition that could be useful in future races.”

It is unclear how long the current enthusiasm will last, however. After the primaries this week and run-offs in May, voter fatigue could set in by November. Or fears of a Democratic takeover could send Republicans to vote in droves.

“Texas is just deeply red,” writes Elizabeth Simas, a political scientist at the University of Houston, in an email. “It’s going to take more than one election to see that kind of major change.”

That may not be the case in more purple states, however.

“If I was an Arizona Republican, I’d be a little nervous,” says Professor Jones. “A Georgia Republican … or a Nevada Republican, you should [also] probably be pretty nervous.”

And some Texas Democrats say they are looking beyond November.