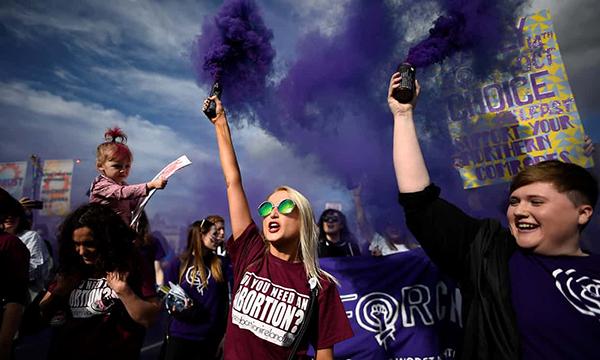 It’s a bugger when your flight is cancelled. It’s worse, I imagine, if you’re having to travel to another country to have an abortion. Time and money matter. When I saw that the recent snow had grounded flights from Ireland I immediately thought of this. Maybe I have never forgotten the time I sat next to an anxious young woman on a flight from Dublin who began to tell me why she was coming to London but couldn’t finish her sentences. She was just so alone that I wanted to go to the clinic with her. In the old days I remember seeing such women on the ferries.

Irish women have abortions, you see – they just don’t have them in their own country. Currently about nine women a day travel to the UK for terminations. Irish society knows of this export of hypocrisy, yet it continues to export its responsibility for human rights. Women pay the price.

But things are changing finally and many men are coming out in support of repealing the abortion ban in the Irish constitution in a forthcoming referendum, the terms of which are to be published on Thursday. A tweet from @Ladsforchoice brought it home: “Plenty of firewood chopped for this snowy weather. Thinking of all those who have had travel plans cancelled. We need health services in this country now.” Men are finally talking of their own experiences travelling with girlfriends to Britain, of seeing their sisters in trouble, of feeling helpless. Such men want to counter male voter apathy on this issue in the coming referendum. Ireland, we hardly know ye.

The so-called Repeal the 8th movement, referring to the clause that enshrines the ban, has brought together the generations as well as forging new relationships between young Irish and young British women in ways that gladden my heart. This runs absolutely counter to the ignorance and indifference that many in the UK, barely able to see Ireland as its own country, have shown towards it in the Brexit debate.

The gathering momentum among the Irish public and its country’s politicians for liberalisation of abortion rights says much about the culture wars. It tells us they are winnable and that minds can be changed. It shows us how to campaign and reminds us that female autonomy is always in jeopardy – that the goal of every fundamentalist in a culture war is to strip the female body of autonomy, be it through virginity tests or restricting access to contraception or safe legal abortion. It is worth noting that Northern Ireland’s Democratic Unionist party, propping up the government, is also fundamentally anti-choice.

But to read the words of the eighth amendment is to see fundamentalism in action. The words strip a pregnant woman of her human rights. It was adopted after a referendum in 1983 and reads: “The state acknowledges the right to life of the unborn and, with due regard to the equal right to life of the mother, guarantees its laws to respect, and, as far as practicable, by its laws to defend and vindicate that right.”

Once you say an unborn foetus is equal to the life of a woman – or, as it turns out, more so – you create the conditions for a procession of preventable tragedies, many of which have horrified the Irish public. What has happened since 1983 is that the unborn has become sacred. If this means the torture or even death of women, then so be it. When I say torture, I mean the several documented cases where women whose foetuses were severely disabled and not viable have been forced to carry these pregnancies to term.

This is utter cruelty. When I say death, I am thinking of the case that sparked the repeal movement: that of Savita Halappanavar in 2012. Halappanavar died because though she was already in hospital miscarrying and asked for a termination, a foetal heartbeat was detected. The foetus was not viable and Halappanavar was told that she could not be induced. Her husband begged doctors to save her but she took her last breath, and Ireland took a deep breath then too. The rights of the dying foetus had prevailed. That is what the eighth amendment meant in practice.

Public protest had been somewhat dormant since the landmark case in 1991 when a 14-year-old girl known only as “X” told her mother she was pregnant and suicidal after being raped by a neighbour. The family planned to travel to the UK for an abortion but the attorney general intervened. As the journalist Fintan O’Toole wrote: “The state was going to force a child to bear a child for her rapist.”

There are so many brutal stories, I don’t need to tell them, from women who cannot have cancer treatment because they are pregnant, to the everyday ones of women begging money from friends for the price of a Ryanair flight. I have been chanting “Get your rosaries off my ovaries” all my adult life. Friends in Ireland have distributed information about abortion every way they could, for at one point even the dissemination of information was criminalised. Now a diverse young population free of the Catholic church is coming to power. What has been especially significant is that this is a once-taboo issue on which politicians have changed their minds in public. A changing demographic forces change. The popular vote in favour of gay marriage showed that demographic that they could do just that.

We are always told that abortion is an issue of hardline morality. The anti-choice lobby has thrown millions of dollars into Ireland. What has happened though is that both the prime minister, Leo Varadkar, and most extraordinarily the leader of the opposition Fianna Fáil party, Micheál Martin, have moved from conservative anti-abortion positions to backing repeal. They have, they said, listened to women in crisis. They have decided to trust them instead of criminalising them.

This is internationally significant because abortion rights are under attack the world over. There are continuing attacks on the availability of abortion pills. Nothing that we have won can not be taken away again. The US vice-president, Mike Pence, said he wants to end abortion in his lifetime. Poland is fast becoming another fundamentalist state as far as women’s rights are concerned. But what Ireland shows – and the long campaigns of so many brilliant women there illustrate – is that attitudes can shift both through high-profile cases and through everyday communication: the stories that women tell each other.

The Irish bishops may have just released a statement about women who are raped or carrying terminally ill babies – “especially in these tragic cases both the mother and her unborn child can and must be loved and cherished” – but such stories from celibate patriarchs are losing their power.

I grew up hearing the story of how my mother nearly died in a toilet at Liverpool Street station after a backstreet abortion.

I look across the water though and see a culture war that can be won. Our rights are hard won and are always under attack. In Britain that is happening in the guise of discussion of time limits on termination. Our right to control our own bodies is a precarious thing. Guard it well. Everywhere and always.