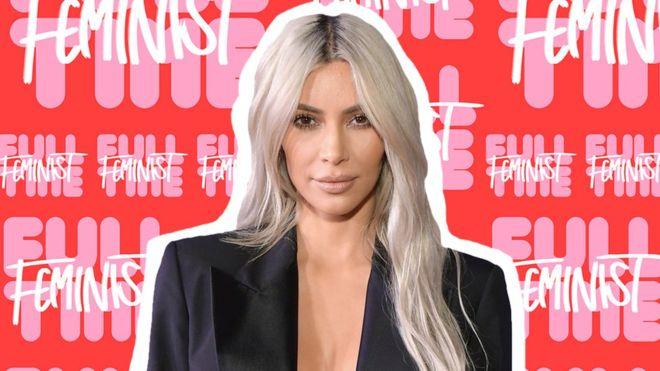 The Kardashians are some of the most divisive figures in popular celebrity culture – spearheaded by Hollywood socialite Kim’s rise to fame, the family have become household names.

Together they have a reality television show which recently celebrated its 10th anniversary. The programme has spawned multiple spin-offs and an ever-growing family business empire.

Love them or loathe them, the Kardashians have made tens of millions by using their celebrity to become powerhouses of the beauty, tech and fashion industries.

But Kim Kardashian’s decision to launch a “women’s empowerment” add-on to her personal emoji collection for International Women’s Day has received a considerable online backlash.

The collection features slogans such as “nasty woman”, “my body, my choice” and “full time feminist”.

Some on social media celebrated the move as positive promotion of ideals of equality. Others accused the personality of hypocrisy because her other products and emojis are provocative and sexualised.

I love the message behind the new Kimoji’s. I’m obsessed with seeing women encourage, support and empower other women. It’s my favorite. We need more of it. #KIMOJI pic.twitter.com/S8k4SBKUjl

Women’s Empowerment emojis is a slap to every women who has stood to fight for our rights. I’m sure #AnnFrank #MalalaYousafzai #rosaparks fought for us all so u can use girl power to sell this…All Class pic.twitter.com/eJsJ4dV8PZ

But this kind of controversy around Kim, in particular, is nothing new.

In 2016, she posted a naked (but censored) picture of herself around International Women’s Day to her millions of online followers and provoked a Twitterstorm. Celebrities such as Bette Midler and Pink criticised her. Others, such as Miley Cyrus, posed nude in solidarity.

She criticised comments labelling her a “bad role model” for the image, and hit out at people bringing up a sex tape that was released without her permission in 2007.

The debate around whether nudity has a place in modern-day feminism is not isolated to the Kardashians.

She responded angrily, asking what her body had to do with her feminist politics.

Model Amber Rose, a vocal advocate against “slut-shaming” has argued the same, writing in Marie Claire that: “My definition of feminism is simple: EQUALITY. It’s not having to base your entire existence around the old school, ultra-oppressive expectations men have for women.

“As an intersectional feminist, I advocate for women from all walks of life and think that all women should be allowed to do whatever they want with their bodies.”

Kathryn Trevenen, associate professor at the University of Ottawa Institute of Feminist and Gender Studies, told the BBC that comments about how celebrities such as Kim Kardashian presented themselves demonstrated how much women’s bodies were still “policed”.

“I worry about the ways in which critiques focus on her femininity, her sex tape and her sexuality,” she said.

“This is very a common shaming technique. But also, this is very on-brand for her. I’d be more interested [in the emojis] if it was more provocative.”

But she pointed to “much more interesting” dialogue and work of celebrities such as US rapper Cardi B, who has spoken candidly about her former career in sex work.

“Kim is so famous that she gets the attention – but it’s not a big change,” she told the BBC.

“She’s not the best to talk about. There are so many other women – indigenous women, women of colour – in front of important struggles.”

Part of the social media debate about the Kimojis is that Kim previously said she resisted the term “feminist” because she did not believe in labels.

“I’ll always fight for women’s rights. Always,” she said in a 2016 blog post. “I support women to the fullest. But, at the end of the day, no one should feel pressured to be labelled as anything just because they believe in certain things and support certain values or ideals.”

People on social media questioned if the emoji launch meant she had changed her mind on the term.

Dr Cynthia Carter, who specialises in feminist media studies at Cardiff University, acknowledged that many feminist academics took issue with self-objectification by celebrities such as Kim Kardashian or Beyonce.

“But if someone wants to call themselves a feminist, they should be able to,” she said.

“Who is to say that there has to be one type of feminist and everyone has to sing from the same hymn sheet?” she told the BBC, adding that she thought feminism should be a dialogue, and not a hierarchy.

Some on social media accused Kim of using feminism and International Women’s Day to profit financially with a $2.99 price tag.

Another replied: “You could have and should have offered this one download for free. Feminism is not for sale or your profit.”

So Kim Kardashian only became a feminist once she could market it with #KIMOJI pic.twitter.com/HFXnNZqrOv

Ms Carter echoed that concern: “Where you could critique her is this conflation of capitalism, and all the inherent inequalities that come from that.”

She believes the problem is not with individuals like Kim, but with wider society’s selection of idols: “Why not think of role models more widely than just celebrities? Women in business, in academia, or in science? Especially on International Women’s Day, we need to broaden our focus here.”