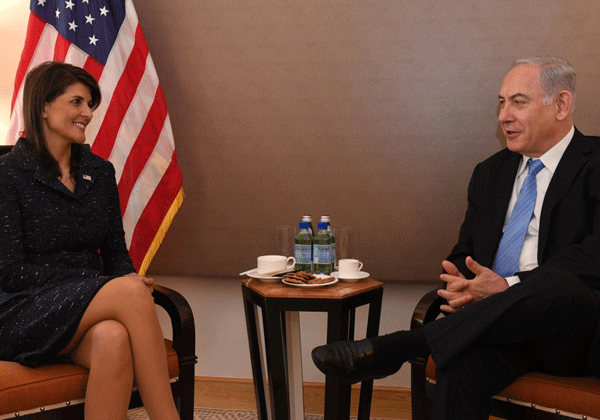 “We call her Hurricane Haley, she does magnificent work for truth and for Israel here at the UN,” the prime minister said about US Ambassador to the UN Nikki Haley during the two’s meeting.

NEW YORK – The only way to prevent the Middle East from turning into a tinderbox of nuclear-armed countries is to deny Iran the right to enrich uranium, Prime Minister Benjamin Netanyahu said on Thursday.

Speaking in the halls of the UN at a small exhibit titled “3000 years of Jews in Jerusalem,” Netanyahu said he was asked in Washington about Israel’s position on the request of other Mideast countries to enrich uranium. He said these countries have been asking for this right since Iran received it “under the dubious nuclear agreement.”

Netanyahu came to the exhibit after meeting US Ambassador to the UN Nikki Haley in her office. “Talk about a tailwind for Israel,” Netanyahu quipped. “We call her Hurricane Haley. She does magnificent work for truth and for Israel here at the UN.”

Netanyahu thanked Haley at the outset of their meeting for her strong defense of Israel, saying she and US President Donald Trump bring the truth and defense of Israel into “these cloistered halls that are drenched with anti-Israel venom.”

Haley said she was amazed at the abusive behavior toward Israel the UN in the past, and said she “felt bad” with what Israel Ambassador to the UN Danny Danon had to put up with.

“But it is actually starting to get a little bit better,” she said. “They don’t want to get yelled at.”

Netanyahu urged her to “continue yelling,” to which she replied, “That’s what I do.”

After viewing the exhibit, which will run for five days and includes a few artifacts attesting to a Jewish connection to Jerusalem and Judea going back to biblical times, Netanyahu noted a disclaimer the UN placed at the entrance.

The sign reads, “The content of this exhibit is solely the responsibility of the sponsors. The holding of the exhibit in UN premises does not imply endorsement by the United Nations. Please direct any queries to the organizers.”

Netanyahu had two comments on the UN disclaimer.

His second point was, “This exhibit would not have been possible two years ago, and this exhibit will not be necessary 10 years from now.”
Israel, Netanyahu declared, is “changing the world, and we are changing Israel’s position in the world. And above all, we are making it clear that we fight for the truth and for our rights.

Netanyahu is scheduled to meet US Treasury Secretary Steven Mnuchin before flying back to Israel on Thursday evening.