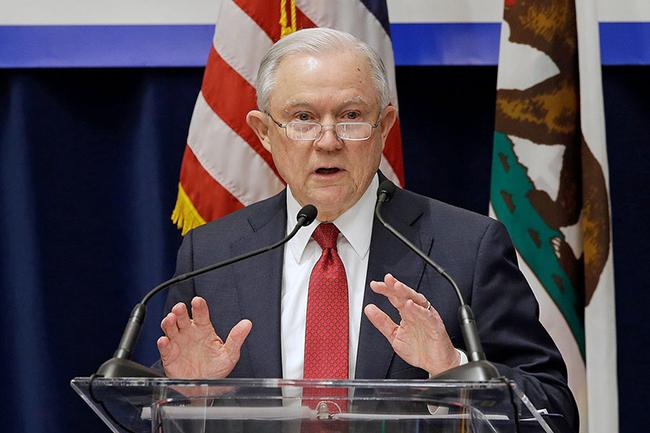 On its face the lawsuit is simply the latest move in an ongoing battle between the Trump administration and state of California. It also highlights the way partisan political agendas have grown entangled in court decisions.

MARCH 8, 2018  LOS ANGELES—In 2017, the state of California filed 24 cases against the Trump administration over issues that range from Obamacare to oil royalties.

This week, the Department of Justice sued back.

The lawsuit, filed Tuesday evening in Federal District Court in Sacramento, asks to block three “sanctuary” laws enacted last year by California, claiming the laws prevent federal immigration officials from doing their job. It marks the latest skirmish in the conflict between the Democratic Golden State and the Republican Trump administration – a clash that began almost as soon as President Trump was sworn into office.

The suit also highlights the way partisan political agendas have grown entangled in court decisions. As the two parties swing toward their extremes, politicians (and the public) on each side have increasingly begun to turn to the courts to arbitrate policy disputes – and to equate a court win with a party win. That’s a false and dangerous equivalence, legal experts warn, because a court ruling endures no matter which party holds the majority in Washington. But it’s an equivalence that gives politicians more incentive to rely on lawsuits instead of, say, congressional compromise, to settle policy differences.

The result is not only a more powerful judiciary, political analysts say. It also allows partisan politics to seep even into age-old issues like federalism.

“It feels less about ensuring that rights are vindicated and more about ensuring a policy position is vindicated,” says Jessica Levinson, a law professor at Loyola Law School in Los Angeles. “It’s a legal matchup, and it’s also a political matchup. Those two things are actually quite distinct.”

The tug-of-war between California and the Trump administration serves, in some ways, as an avatar for this tangled, partisan battle – with immigration as the symbolic, central issue for each side’s politics, says Theresa Brown, director of immigration and cross-border policy at the Bipartisan Policy Center in Washington. It’s not the first time Washington has scuffled with a state over a partisan issue, or even over immigration. In 2010, the Obama administration sued Arizona over a law that cracked down on unauthorized immigrants, accusing the state of violating federal law. The case made its way to the US Supreme Court, where, in 2012, a majority of justices found that federal law preempted state law in three of the four provisions in contention.

Now in one corner it’s California and the Democrats who, at the urging of their progressive wing, have solidified protecting immigrants from enforcement. In the other are Trump and the Republicans who, through the calls of their populist arm, have consolidated – though with somewhat less uniformity – around enforcing immigration law, Ms. Brown says. Whoever wins the lawsuit over sanctuary laws scores major political points with their base.

“This is an exact mirror image of what the Obama administration did to Arizona with [Senate Bill] 1070,” says Josh Blackman, associate professor at the South Texas College of Law in Houston.

The problem is that there’s more at stake than just one-upping the other side. It’s true that whatever the courts decide would have repercussions for immigration policy at the state level – specifically around the kind of sanctuary laws states and localities can legally implement. And most people are aligning on the DOJ’s lawsuit based on whether they agree or disagree with California or the federal government on the issue, Professor Levinson notes.

But any decision could also redefine, long-term, how far states can push back against federal authority on immigration. “If the case decision will define the contours of federal power versus state power in this area – and I think it will – those contours and boundaries hold true regardless of whether it’s a Republican in the White House or a Democrat in the White House,” Levinson says.

To be sure, partisan politics has always been a feature of federalism – that age-old struggle to draw the line between states’ rights and federal authority – and of American government writ large. A Republican-majority federal government was always more likely to butt heads with a Democrat-led state, and vice versa. Still, extreme partisanship means either side is less likely to compromise on issues like immigration – and more likely to turn to the courts to resolve disputes, political analysts say.

Lawsuits are not necessarily a bad mediation tactic, especially when compared to bloodier avenues – like the Civil War, says Michael Gerhardt, a constitutional law professor at the National Constitution Center in Philadelphia. They do, however, lead to another enduring consequence: more power for the judiciary.

“The courts win no matter what happens,” says Professor Gerhardt, who also teaches at the University of North Carolina School of Law in Chapel Hill. Regardless of who benefits politically from a court ruling, lawsuits “give the courts more authority over the political branches … and increase the likelihood that they become institutions that people turn to to solve their problems.”

Until the decisions are made and work their way through the appeals process, it’s unclear what effects the clash between California and the Trump administration might have on immigration and other issues in the long run. What is certain is “neither side has very much reason to stand down,” says Ilya Somin, professor of law at George Mason University in Fairfax, Va. “For California politicians … they believe that public opinion is on their side. Meanwhile Trump believes that taking down sanctuary cities is supported by his base.”

“It’s very difficult to bargain when the center is so underpopulated,” adds John Pitney, political scientist at Claremont McKenna College in California. “The one thing you can say for sure is there’s going to be lots of litigation, lots of lawsuits, and lots of billable hours.”