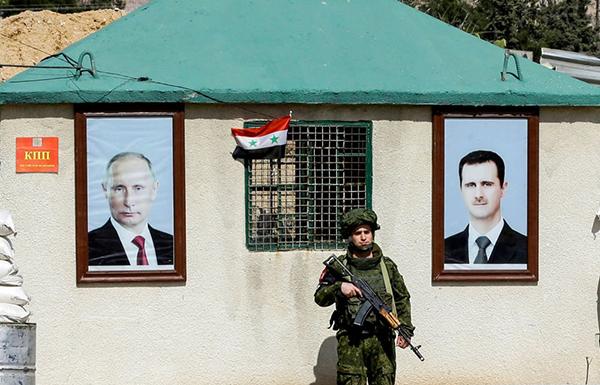 The forces of democracy and the great moral gains of the New World Order have given way to great-power conflict and the new autocracy.

For anyone who thought that the winding down of the campaign against the Islamic State would cause the Syrian civil war to recede from the headlines, the last few weeks have been a rude awakening. Far from abating, the Syrian conflict is intensifying, with a brutal assault — reportedly involving chemical weapons — by the Syrian government on rebel-held areas near Damascus, sharp aerial clashes between Israeli, Iranian and Syrian forces, and a bloody and one-sided confrontation between American airpower and Russian “mercenaries.”

These events do more than simply demonstrate that the Syrian conflict remains an appalling humanitarian catastrophe. More significantly, Syria is the nexus for the destabilizing trends that are thrusting the entire global order into crisis.

That order was originally created after World War II, but it reached its full flowering and ambition after the fall of the Soviet Union. The post-Cold War era was characterized by widespread hopes that the forces of order and civilization were finally defeating those of aggression and inhumanity; that democracy was becoming truly universal; that great-power competition had vanished; and that the danger of major war was receding further than ever before. Nearly three decades later, however, the heady optimism of that period has given way to a darker set of trends, all of which are at work in Syria.

Begin with the obvious: Syria represents an assault on the very idea of moral progress. But it’s not alone. Around the globe, longstanding legal and ethical norms are being eroded, and the world is being dragged back to a more ruthless, less-enlightened age. China, which may have a ruler-for-life, is chipping away at freedom of navigation in the Western Pacific; Russia has shattered the taboo against wars of aggression and conquest in Ukraine and elsewhere.

Yet Syria is where the erosion is most advanced and the consequences most horrific. The regime’s continued use of starvation sieges, barrel bombs and illegal weapons against the civilian population — and the international community’s inability or unwillingness to bring the slaughter to an end — demonstrates more painfully than anything else that the moral gains the world seemed to have achieved are now being rolled back, and the rules of conduct it seemed to have established are now being transgressed. Neither the Barack Obama administration, with its “red-line” fiasco of 2013, nor the Donald Trump administration, with its diplomatic disengagement from the conflict, has had an answer to this challenge.

The Syrian war also reveals a second unsettling feature of global politics today: the return of ideological conflict. This is not to say that the civil war is a clash between entrenched authoritarians and aspiring democrats. Many Syrians who initially protested and fought against the regime in 2011 and 2012 wanted a transition to a more pluralistic system, but most of those moderates have now been killed, radicalized or otherwise driven from the field.

Nonetheless, the Syrian conflict reflects the broader authoritarian resurgence at work. President Bashar al-Assad offers the most brutal and ruthless example of how the world’s remaining dictators have not meekly succumbed to the forces of liberalization, but have instead become tougher and more tenacious in clinging to power.

Moreover, the war shows how ideological differences are again driving global politics. Most of the Western democracies have insisted — rhetorically, at least–that the killing must stop and Assad must go. Yet the world’s leading autocracies — China, Russia and Iran — have rejected the idea of foreign-imposed regime change and provided various forms of assistance to keep a fellow autocrat in power. The competition between authoritarianism and democracy has been renewed, and nowhere has that competition been sharper than in Syria.

Meanwhile, intense geopolitical competition has also returned, and here too, Syria is ground zero. Iran and Israel are maneuvering — often violently — for advantage, as part of their broader regional struggle. More strikingly still, Syria has become an arena for renewed great-power rivalry between the U.S. and Russia. The once and current adversaries do not simply disagree over Assad’s fate; they are using their military power to carve out competing spheres of influence and stake their respective claims to leadership in Syria and the broader Middle East.

Russia in particular is using Syria as a proving ground for the advanced weapons systems and hybrid-warfare tactics it might well employ in a future conflict with the West, as well as to make itself a player in Middle Eastern geopolitics. From Ukraine to the South China Sea, great-power frictions are again the global norm, and Syria has as good a claim as any location to be the cockpit of the rivalry.

This relates to a final way in which Syria illustrates the growing crisis of global order — through the surging risk that it might set off a much larger military conflict. Across Eurasia, the danger of major war is rising, as geopolitical rivals arm themselves, refine their war plans, and brush up against one another in increasingly incendiary ways. And in the last month alone, the Syrian civil war has occasioned two separate incidents that might have served as the spark.

The recent clashes between Israeli, Iranian and Syrian regime forces — which started with an Iranian drone intruding into Israeli airspace, and culminated in a significant Israeli attack on Syrian air defenses — might easily have spiraled into something bigger. Had an Israeli F-16 downed by Syrian air defenses in early February not made it back across the Israeli border before its crew ejected, for instance, an aerial skirmish could have turned into a fight involving ground forces.

Last month’s combat between U.S. forces and Russian mercenaries was even more dangerous. The Russian decision to use hybrid forces to attack a base at which U.S. troops were present demonstrates how bold Moscow is becoming. The punishing U.S. airstrikes that reportedly killed around 200 Russian personnel show the potential for great-power rivalry in Syria to rapidly escalate into something more deadly. If one is looking for evidence that the relative international peace of the post-Cold War era is crumbling, look no further than the U.S.-Russian quasi-war occurring in Syria today.

Some wars are ultimately remembered less for appalling harm inflicted on participants and bystanders than for what they revealed about the larger state of the world. We now see the Spanish Civil War, for instance, not just as a tragic episode in the history of that country, but for what it demonstrated about an international system under strain. Today, our own international system is fraying at the edges. If that process continues, we may one day look back on Syria as the crisis that foretold the greater unraveling to come.