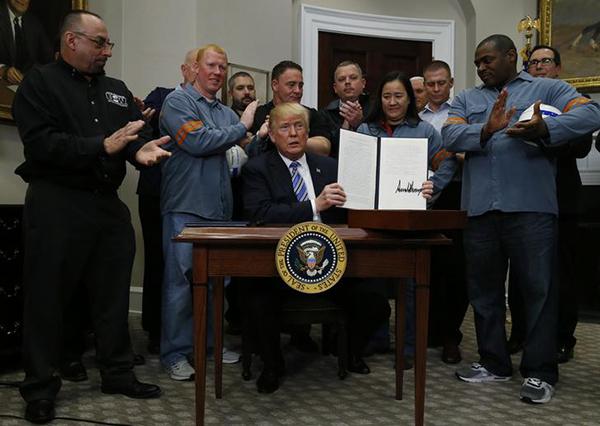 President Trump has signed controversial orders imposing heavy tariffs on steel and aluminium – but some countries will be spared.

Mr Trump has said the US is suffering from “unfair trade” and that the move would boost US industry.

But countries have expressed outrage at his plans, and experts have warned of new trade wars.

The tariffs will go into effect in 15 days and include exemptions for Canada and Mexico.

Tariffs of 25% are to be placed on steel and 10% on aluminium imported into the US.

The tariffs are opposed by many in the president’s own party and by the US’s major trading partners.

Republican Senator Jeff Flake – a prominent critic of Mr Trump who opposes the move – said he was drafting legislation to nullify the tariffs, saying trade wars are only ever lost.

House Speaker Paul Ryan said he disagreed with the action and feared its unintended consequences.

What has the international reaction been?

On tonight’s announcement – the EU is a close ally of the US and we continue to be of the view that the EU should be excluded from these measures. I will seek more clarity on this issue in the days to come. Looking forward to meeting USTR Lighthizer in Brussels on Sat to discuss.

Steel and aluminium workers were at the signing.

Mr Trump praised them as “the backbone of America” – and alluded to their role in his election.

He said such workers had been betrayed – but that was now over and he was delivering on a campaign promise.

The president said the tariffs would defend America’s national security.

What exemptions will there be from the new tariffs?

They will apply to all countries except Canada and Mexico, which will be exempt while discussions over the North America Free Trade Agreement (Nafta) take place.

There are provisions within the documents for other countries to get exemptions.

He also praised his country’s close relationship and trade surplus with Australia, saying “we’ll be doing something with them”.

The president linked defence spending to trade, and said the US “subsidised many countries” in the military.

He said there would be a reduction in tariffs for countries that “treat us fairly”, but said “many of the countries that treat us the worst on trade and on military are our allies”, singling out Germany for criticism in his earlier comments.

Why is Mr Trump doing this?

Mr Trump says he aims to protect the American worker – and he promised in his campaign that he would rebuild the steel and aluminium industries.

The two metals are “the bedrock of our defence-industrial base”, the president said on Thursday.

The industry has been “ravaged” by aggressive foreign trade practices that are “an assault on our country”, the president said.

He is also making a political decision, aiming to appeal to blue-collar voters in states such as Pennsylvania – voters who turned away from the Democrats to support Mr Trump in 2016.

The president says the US’s trade deficit is due to “very stupid” deals and policies.

Shorter version: This is about jobs, not commodity production. There’s a reason Trump brought steel workers up on the podium to thank him. But he’s using a national security provision to justify the move.

What are possible repercussions?

Mr Trump’s announcement last week about his plan to impose the hefty tariffs sparked alarm and upset markets at home and abroad.

Major trading partners have threatened retaliation and the plans are opposed by many in his own party.

Mr Trump has said that the US would “win big” in a trade war.

Other countries are likely to take the US to court, arguing that the decision violates World Trade Organization moves.

The director of UK Steel said the tariffs would have a profound and detrimental impact on the UK steel sector.

“Imposing such measures on US allies in the name of national security is difficult to comprehend,” Gareth Stace added.

President Trump made clear on Wednesday he will consider exemptions to the tariffs.

The move invites lobbying from other countries and could quiet critics who say his actions will lead to a trade war.

Will Mr Trump’s approach, which the White House has described as “flexible”, mean this proves to be another announcement stronger on rhetoric than substance?

We don’t know yet. The White House has said exemptions will be granted to nations that offer other ways to resolve his concerns about national and economic security.

The strategy has raised objections from at least one Republican. But should countries want to talk, that provides Mr Trump the opportunity to revisit a host of issues near and dear to his heart, including a wall along the Mexican border, barriers to US goods in countries like Germany and South Korea – even US contributions to security organisations like Nato.

Mr Trump, who casts himself as the ultimate negotiator, is opening the door to more of the deal-making he appears to relish.

OPEC+ Is On The Brink Of A Crisis