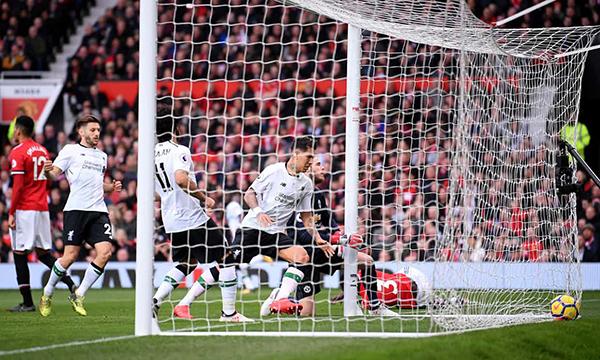 As the one Mancunian in José Mourinho’s team, Marcus Rashford will know enough about north-west rivalries to understand why this counts as one of the more pleasing results of Manchester United’s season. It may not make a jot of difference when it comes to the destination of the league title, with Manchester City haughtily observing from a long distance away, but Rashford chose a good day to remind everyone of his penetrative qualities.

This was Rashford’s first league start since the turn of the year and, on this evidence, maybe the break has done him good. He has struggled at times this season and his return to form is certainly well-timed from the perspective of Gareth Southgate. The England manager was watching from the Sir Bobby Charlton stand and will have appreciated Rashford’s two diagonal finishes; Southgate’s latest England squad will be announced on Thursday. Of more immediacy is the fact those goals have helped consolidate United’s position in the battle for second place, albeit they remain 13 points behind City.

For Liverpool that will be a source of intense frustration when they had so much of the ball in promising positions during the second half and the six minutes of stoppage-time. Jürgen Klopp was entitled to say his team could have saved themselves during that part of the match.

Ultimately, though, Liverpool’s problem was that none of their big-hitters reached their usual levels. Mohamed Salah in particular picked a bad day to put in one of his least effective performances and it was unusual to see Roberto Firmino and Sadio Mané so subdued.

Perhaps that was because of the way United defended so deeply in the second half, protecting themselves against the counterattack. But that was not so relevant in the opening 45 minutes when the home side were clearly buoyed by Rashford’s goals and there was even the sight of Eric Bailly taking the ball around Salah with a little pirouette. The crowd loved Bailly’s impudence and, though Mourinho did not look quite so thrilled with that kind of risk-taking, it was a reflection of the home side’s confidence in that period.

It was shortly afterwards when Romelu Lukaku’s long crossfield pass picked out Rashford on the left, the ball was clipped into the penalty area and Juan Mata flashed an overhead kick narrowly wide. Had that one gone in it would have been a goal-of-the-season contender.

Unfortunately for Bailly, not everything he tried came off so elegantly. Midway through the second half, the centre-back went to clear Mané’s left-wing delivery and somehow slashed the ball the wrong way to divert it past David de Gea. It was an eccentric own goal, ensuring a blistering and tense finale and, for United, it was a desperate scramble at times to hold on.

Their tactics throughout the final exchanges could be encapsulated by Mourinho’s decision to bring on Marouane Fellaini for Rashford. Fellaini blocked and tackled, jumped and harried and got in the way. It was exactly what United needed.

Liverpool will think back to the moment 10 minutes into the second half, when Andrew Robertson’s cross struck Antonio Valencia’s hand inside the penalty area only for the referee, Craig Pawson, to give United’s captain the benefit of the doubt. Klopp also mentioned a risky penalty-box challenge from Fellaini on Mané but there was no real explanation as to why it took Liverpool so long to get into their stride. Their nervousness in the first half was unusual when they have scored even more away goals this season than Manchester City.

For United, perhaps the only slight downside came in the form of Alexis Sánchez’s continuing difficulties in adjusting to his new team. At one stage he had the chance to set Rashford free but chose the wrong pass to Lukaku and overhit it anyway. A bemused Mourinho turned to his coaching staff and drew back his foot to show how it should have been played.

Sánchez had a poor match but that did not matter too greatly when the players around him were rising to the occasion and it did not take long for it to become clear that Rashford could make this a difficult game for Trent Alexander-Arnold. In the 14th minute, Lukaku flicked on De Gea’s goal-kick and Rashford had his first chance to take on Liverpool’s right-back. He eluded him with a clever cut-back, changing direction at speed, and beat Loris Karius with a shot of power and precision.

Lukaku was involved again for what turned out to be the decisive goal. This time, Mata had the first chance, running on to the striker’s weighted pass, but Virgil van Dijk came across to turn the ball away. The problem for Liverpool was that Karius was now out of position and the ball was rolling invitingly towards Rashford. Again, he went for the corner he had picked out 10 minutes earlier and the ball flicked off Alexander-Arnold’s heel to deceive Liverpool’s goalkeeper.