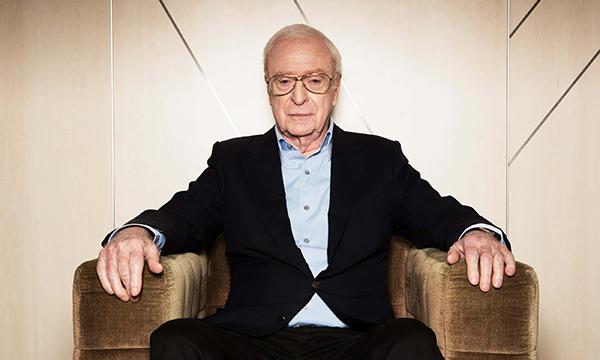 Now 84, Michael Caine has appeared in 127 films, including Zulu, Alfie and The Italian Job, and been Oscar-nominated six times, winning twice. Caine is the narrator, co-producer and star of new documentary film My Generation, about his journey through 1960s London.

What inspired you to make My Generation?
Simon Fuller [Spice Girls/Pop Idol svengali] and I are friends, and over dinner, conversation kept coming round to the 60s. He was too young, so was always asking about it. One evening he said, “Let’s make a documentary. You can tell the stories and I’ll find the music.” It’s taken a few years, but that’s what we did. I have a very good memory, which is fortunate at my age, so there’s a lot of material left over. We’re turning that into a six-part TV series.

The film is studded with star names, but they don’t appear in traditional “talking heads” style. Why?
I interviewed loads of people – McCartney, Twiggy, Roger Daltrey, Joan Collins – but we ended up taking the footage out of the film. It screwed it up, because you’re no longer immersed in the 60s, you’re too busy going “Oh look, he’s gone bald,” or “Ain’t she got fat?” So you only hear their voices; we’ll use the footage in the TV series instead.

I thought the saying went “If you remember the 60s, you weren’t really there”?
That’s more the late 60s/early 70s. In the 60s, we were drinkers. What ruined the 60s, towards the end of the decade, were drugs. If people were taking cocaine, they’d start talking bollocks and not stop for hours. If they were on other drugs, they’d just sit around, going “Wow, man.” So it was either people talking too fast to understand, or people not saying anything at all. It brought to an end the 60s as we knew it – which was a load of drunks getting up to all sorts and dancing like mad.

Is it true you smoked marijuana just the once?
Yes, and I laughed for five hours. I nearly got a hernia. I must have been very tense beforehand! When I left the party at 1am in Grosvenor Square, I was standing alone on a corner, roaring with laughter, and no cab would stop for me. I had to walk to my flat in Notting Hill, and when I got back, I vowed I’d never take bloody drugs again. And I never did. I’m not anti-drugs: I’m sympathetic to people who take them, because they’ve got themselves in a situation that I really do not envy. Most drugs are terrible… at least marijuana’s good for medicinal purposes..

You permanently had a fag in your mouth during the 60s, though…
I smoked a lot, but Tony Curtis saved my life. I was at a party, chain-smoking by the fireplace, when a hand came round from behind me, took the cigarettes out of my pocket and threw them in the fire. I turned round and it was Tony Curtis. We’d never met, but he said: “I’ve been watching you, Michael. You’re going to die if you keep doing that, you idiot.” So I quit.

I later took up cigars, but gave them up because of Hurricane Higgins, the snooker player. I knew Alex quite well, and one night I was smoking a cigar while watching TV. Alex came on the screen with a voice-box and I could see he was dying. I stubbed the cigar out in the ashtray and never smoked again.

In the documentary you sometimes seem like the more senior, sensible one…
Well, I was a serious actor. I’d spent nine years on stage and worked my way up to leading roles in movies. I’d be up at 6.30am for a day’s worth of dialogue, so I couldn’t stay up all night, dancing and getting laid. Don’t worry, though… between films I’d go a bit mad.

My Generation has a 50/50 gender split of contributors. Did you insist on that?
Absolutely. I’m a feminist to the core. An interviewer once asked my wife, “What first attracted you to Michael?” and she said, “The way he treated his mother.” I respected women tremendously, right from the start. I just didn’t know I was a feminist until they invented it.

Social change is a big theme in My Generation…
That’s the serious point of the film, really. Society was transformed by the 60s. I was born during the Depression, then came the Blitz. I was evacuated and spent six years waiting for a telegram telling me my dad was dead. A tough start. Six years after the war, I was in the army myself – first in the occupation force in Berlin, then the Korean war, fighting the Chinese. When I got home, London was all smog and rationing. The last straw was [Soviet leader] Khrushchev’s speech saying they now had the atom bomb and could send it here in a rocket to annihilate us within four minutes. So the attitude became: “We’re miserable as sin, we’ve got four minutes to live, let’s have some fun.” And boy, did we have fun.

Was there a working-class takeover of culture?
Yeah, slowly but surely. Small things happened: Radio Caroline launched, before the BBC finally gave in and started playing pop music. Coffee bars started putting on live groups, like the Beatles. Discotheques arrived from Paris. The first night I went to the Ad Lib club – run by my friend Johnny Gold, who later opened Tramp and called me “Disco Mike” – every single Beatle and every single Rolling Stone was in there dancing. Pop culture went bang, exploded, and just kept going. Working-class kids everywhere

David Bailey and Terry O’Neill became almost as famous as the people they were photographing. I shared a flat with Vidal Sassoon and got free haircuts. Terence Stamp was another flatmate. It seemed like everyone I knew became famous.

You were good friends with Roger Moore. Did his death last year hit you hard?
Yeah, we were close. But at my age, you get used to your friends dying.

You’ve been buddies with two Bonds, Moore and Connery. Who would you like to play 007 next?
Tom Hardy. And make him do a posh accent.

You won an Oscar for Hannah and Her Sisters. What do you make of the accusations against Woody Allen?
I am so stunned. I’m a patron of the NSPCC and have very strong views about paedophilia. I can’t come to terms with it, because I loved Woody and had a wonderful time with him. I even introduced him to Mia [Farrow]. I don’t regret working with him, which I did in complete innocence; but I wouldn’t work with him again, no.

Last year, you were in yet another Oscar-nominated film, Dunkirk…
Only a cheeky little cameo. Christopher [Nolan, director] and I have done six very successful films together. I’m his good-luck charm. Or is he mine? Anyway, I had to be in Dunkirk, but there was no proper part for me because of my age. Instead I did the voice of the Spitfire squadron leader over the radio. I looked at the gross yesterday: half a billion. The lucky charm worked again.

You seem almost as busy as ever…
What’s come into fashion, fortunately for me, is films for older people. Ever since The Best Exotic Marigold Hotel took $150m, they’ve realised there’s a generation who still go to the cinema. So last year I made Going in Style with Morgan Freeman and Alan Arkin, all of us in our 80s. I’ve just done Night in Hatton Garden, about the oldest robbers in history. It’s like the audience have grown up with me.

Tess Daly says you’d be her dream celebrity contestant on Strictly Come Dancing. Fancy it?
Oh, really? I’m afraid I’m beyond that. She should be mighty relieved. I watch Strictly every weekend with my three grandchildren. We all shout out the scores together.

Was the 60s the best decade of your life?
At the time it was. Since then, my life has improved from decade to decade. My joy nowadays is not movies, money or women – I’ve been happily married for 45 years to the most wonderful woman I ever met – it’s my grandchildren. I’m devoted to them.

You’re 85 next week. How are you celebrating?
My wife’s organising something but won’t tell me what. My 80th was in Las Vegas with Quincy Jones. We call ourselves “the celestial twins”. He composed the music for The Italian Job and when he came on set, we worked out we were born at exactly the same hour. We’re not identical twins, clearly, we’re celestial ones. One thing I love about Quince is he’s always late for everything. He invited me around for lunch recently and he was an hour late. In his own house.

Will you ever retire?
No. The movie business retires you. I’ve just turned down a film, actually; but if I get a script I really want to do, I will. I’m busy enough. I’ve got the TV series and a book I’m writing. I did a guide to acting, which went very well, so now I’m writing one on stardom. It’s full of funny stories and I name-drop like fury, obviously. You might have noticed.

My Generation is released 16 March. On 14 March a preview screening in cinemas will be followed by a live Q&A with Michael Caine, broadcast from BFI Southbank