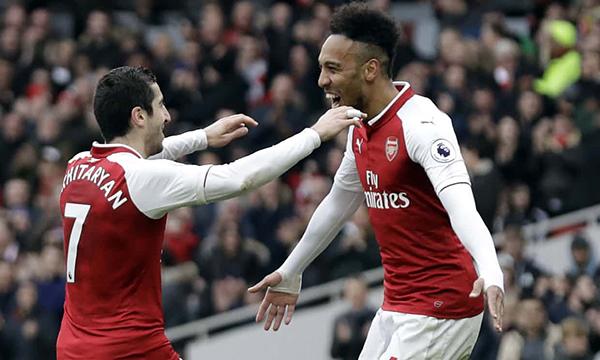 David Hytner at the Emirates Stadium

It was the game between the games that matter for Arsenal and for long spells there was a stuffed Sunday lunch feeling to it all. But it turned into something palatable for Arsène Wenger – a comfortable Emirates Stadium win decorated by second‑ half flickers from the January signings Henrikh Mkhitaryan and Pierre‑Emerick Aubameyang.

Mkhitaryan played in Aubameyang to make it 2-0 and, after Petr Cech had saved a penalty from the pantomime villain, Troy Deeney, Aubameyang teed up Mkhitaryan to finish for 3-0.

Arsenal’s focus has shifted from the Premier League to the Europa League, which has come to represent their only route into the Champions League next season and they are back here on Thursday night for the second leg of the last-16 tie against Milan in which they are 2-0 up from the first leg.

Wenger’s team selection had reflected his changing priorities. He rested Laurent Koscielny, who he said had a slight calf problem, and Aaron Ramsey, while Jack Wilshere and Calum Chambers were used as second‑half substitutes. The latter replaced Shkodran Mustafi – the scorer of the opening goal – who limped off with a groin problem, which will be assessed on Monday.

The game had been framed, to some extent, by Deeney’s headline-grabbing comment from last October, when he questioned the cojones of the Arsenal players after Watford’s victory against them at Vicarage Road. He was the one that failed to measure up on this occasion. Deeney put his head down and blasted the penalty only for Cech to stick out a hand and beat the ball away. Schadenfreude barely covered it.

It helped Cech to his 200th Premier League clean sheet – a milestone he has waited some time to bring up. The 199th had come in the 1-0 home win over Newcastle United on 16 December. It had been the longest run of his career – 11 games – without a clean sheet. The 35-year-old was at fault for both concessions in the 2-1 defeat at Brighton last Sunday, which had followed Arsenal’s defeats against Manchester City in the Carabao Cup final and the league.

“It’s quite fortunate the penalty save was against Deeney,” Wenger said with a smile, before he considered whether Deeney’s comments had served to motivate his players. “All these things come in always a little bit. How much I don’t know but, of course, it plays a part. Cech’s situation shows how football is. In one week he went from hell to heaven.”

It is debatable whether the Arsenal support have ascended to such a peak after this win and the Emirates was once again pockmarked by empty seats – a sign of the dissatisfaction at the club’s direction under Wenger. The manager said that the stay-aways were “understandable” after the “nightmare week” they had endured with the City defeats and the one against Brighton and he was unsurprisingly keen to dismiss it as a blip.

“We have some work to do but overall we are in a good way,” Wenger said. “This gets us out a little bit of that negative spiral we were in. There’s a lot of negativity. It’s like the rain in England – it’s easy to get. I focus on my job. I’ve shown in 22 years I can do that.”

Mustafi gave Arsenal an early lead when he eased into a seam between Adrian Mariappa and José Holebas to head home Mesut Özil’s free-kick, while Watford were indebted to Orestis Karnezis for first-half one-on-one saves from Aubameyang and Özil. Aubameyang also stretched for a Sead Kolasinac cross but could not quite get there.

Watford should have been level at the interval on the balance of chances and there was the nagging sense that Arsenal’s patched-up backline had an error in them; that a ball in behind would expose them. Wenger reported that Héctor Bellerín (knee) and Nacho Monreal (back) could return against Milan.

Cech saved from Abdoulaye Doucouré and Richarlison while, between times, the goalkeeper pushed out a Richarlison free-kick to present Roberto Pereyra with an inviting chance. He blazed off target. Cech was not entirely convincing when asked to get down low with any degree of speed.

Aubameyang’s short Arsenal career has not been characterised by the work he has done away from the penalty box. He has been signed to spark inside it and he did so just before the hour, following Mkhitaryan’s run and weighted pass. Aubameyang nipped ahead of Karnezis to score his third goal in six appearances for the club.

Cech’s penalty save was his first for Arsenal; the kick was awarded when Ainsley Maitland-Niles blocked Pereyra – a “very generous” decision, according to Wenger. Karnezis ought to have kept out Mkhitaryan’s goal, although he did save late on from the substitute, Danny Welbeck.