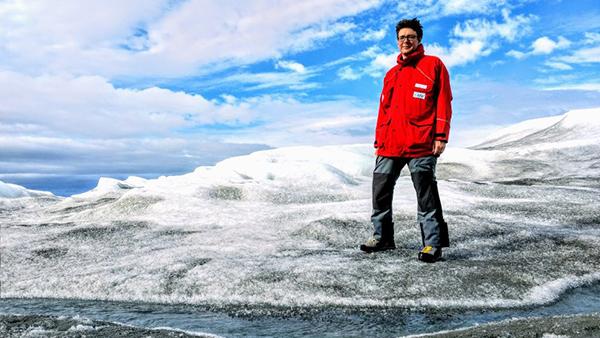 Christoph Seidler traveled to the vast Greenland ice sheet to visit scientists studying global warming there. In an interview, the reporter talks about what makes such projects so special and why he almost didn’t make it back.

Adventurous trips, unforgettable encounters, anecdotes and impressions from foreign countries: In the Hörweite podcast series , SPIEGEL ONLINE reporters talk about their reporting trips around the globe (in German). In this edition, science journalist Christoph Seidler talks about his journey to a research station on the Greenland ice sheet. Here, you can read an abridged, English-language version of the interview.

SPIEGEL ONLINE: Nice to have you back, Christoph. There are rumors to the effect that you almost didn’t make it back from your reporting trip to Greenland.

Christoph Seidler: It wasn’t easy, that’s for sure. I had the pleasure of visiting the EastGRIP project in Greenland, where scientists are trying to drill through two-and-a-half kilometers of ice down to the rock below. The only way to get to the site is with a special plane equipped with skis. Getting there with the plane was already exciting enough. But it was almost impossible to take off on the way back out. It took us nine tries before it worked.

SPIEGEL ONLINE: Why? That sounds dramatic.

Christoph Seidler: Dramatic is perhaps a bit of an exaggeration, but it was a bit of a challenge. A roughly three-kilometer-long runway has been bulldozed into the ice at the research station. But the problem is that if it gets too warm, the snow melts a bit and that can lead to the airplane basically sticking to the ground. The pilot made repeated attempts to gather enough speed by end of the runway. You can see the little flags that mark the runway rushing by outside, and from the flags you can tell how fast you’re going – and that you’re not going to make it this time either. Luckily, though, the pilot had a couple of tricks up his sleeve.

SPIEGEL ONLINE: Like what? You obviously managed to take off in the end.

Christoph Seidler: There is, of course, one extremely simple step: removing as much weight as possible. We were supposed to bring back samples, but also stuff like garbage, for example. That was removed to make the airplane lighter. The passengers were then moved to the back to the degree possible so that the center of gravity moved to the rear. Plus, every takeoff attempt burned fuel, meaning that after eight attempted takeoffs, the plane was considerably lighter than it had been for the first. But we weren’t in the clear yet. Once we were in the air, the pilot said: “The good news is that we’re airborne. The bad news is that we don’t have enough fuel to make it home.” That meant that we had to stop on the ice again at a different research station to get fuel. The station was called Summit. The pilot knew that the runway there is longer, over four kilometers long. As such, he figured we’d be able to take off on the first try, which turned out to be the case.

SPIEGEL ONLINE: What does such a research station on the ice of Greenland look like?

Christoph Seidler: When you approach the station in an airplane, all you can see are a couple of small dots on the vast expanse of ice. They are arranged in a fairly regular manner and get bigger and bigger the closer you get. Eventually, you can see that the dots are of different sizes. There is a large black one, which is the dome, the heart of the research camp. And there are lots of small red ones, including the huts or tents where the researchers sleep at night. It all looks a bit like playing pieces on a board game, except that the board is completely white.

SPIEGEL ONLINE: Who sets up research stations like this one?

Christoph Seidler: Different countries are working together at the site: Danes, Germans, Japanese, Norwegians, Americans, Swiss, French and Chinese. The German part of this project is run via the Alfred Wegener Institute for Polar and Marine Research in Bremerhaven. They also have a permanent station in Svalbard, which I was once able to visit. And they have a station in Antarctica, the Neumaier Station, which – in case anyone who is involved is reading this – I would also like to visit.

SPIEGEL ONLINE: You mentioned the project is called EastGRIP. What does that stand for?

Christoph Seidler: It stands for the East Greenland Ice Core Project, because an ice core is being drilled at the site. There are already a half-dozen such cores, so that’s not necessarily what’s new about this project. The interesting part is where it’s taking place, the North-East Greenland Ice Stream, a gigantic ice highway that flows northeast from the center of Greenland for a few hundred kilometers, ending up in the sea in the form of a trio of glaciers. About 12 percent of Greenland’s ice is transported on this ice highway, and that’s what is so exciting about this project: It’s the first time that a core is being drilled from an ice stream like this one.

SPIEGEL ONLINE: How austere do the people live at the station? Do they only eat canned food?

Christoph Seidler: I was only at the station for a short time, so I can really only tell you what the scientists told me. But during my brief stay, I had the impression that it’s no longer quite like it used to be in the time of Fridtjof Nansen or Alfred Wegener (Eds. Note: Both were early explorers of Greenland), when these kinds of expeditions involved tremendous personal privation. Because the station is regularly supplied by the special aircraft, the scientists regularly get fresh supplies. That means they don’t just have canned food and summer sausage, but also fresh tomatoes and salad on occasion. There were two cooks at the station whose job it was to prepare food for the scientists. And good food is extremely important: to keep up moral on the one hand, because the people there work unbelievably hard. And, on the other hand, because you need a huge number of calories in the cold weather. You need to keep the people fed so they don’t collapse.

SPIEGEL ONLINE: Since you mentioned temperature: Do you think we can learn something here in Germany from how the scientists in Greenland deal with the cold?

Christoph Seidler: We can definitely learn something. Namely, that grandma and grandpa were right when they said there is no bad weather, just unsuitable clothing. Before the trip, I had to fill out a form to provide the Alfred Wegener Institute with my clothing size, mitten size, hat size, and so forth. And then an enormous duffel bag was packed full of all kinds of polar clothing: different parkas, pants and undergarments. So that you’re prepared for anything. I also thought it was interesting that there are these snow boots in the camp that look really funny. They’re huge and often neon orange in color. They make you look like Goofy. But the scientists are rather pragmatic about them.

SPIEGEL ONLINE: What were the scientists you met at the station like?

Christoph Seidler: The first thing I noticed was, people always say that science is international these days, and with projects like this one, you can really see what that means. The teams are extremely diverse and it’s really quite impressive. I also found it interesting that, because people don’t need to be there for the entire season, and many only stay there for a couple of weeks, it’s not just weathered old-timers, but also normal people, including students. And I thought it was interesting that you run into people who say funny things like, “I am bipolar.” That doesn’t mean that they have a personality disorder, but rather that they work on both poles – in the Arctic during the northern summer, and in the Antarctic in the southern summer. They’re pretty crazy.

SPIEGEL ONLINE: Do you wish you could have stayed at the station longer? A real expedition: Is that something you’d be interested in?

Christoph Seidler: I thought about that too, and I don’t think so. Our friendly former co-worker Stephan Orth actually did cross Greenland on skis, because his grandfather once led an expedition there. He wanted to follow in his granddad’s footsteps. You have to be in pretty good shape for something like that – and that’s one problem I might run into. I think if you have a research project you’re working on, then it’s easier to stay longer. As a journalist, a shorter visit was just fine.

SPIEGEL ONLINE: What was the highlight of your trip?

Christoph Seidler: We’re talking about a place that very few people have had the privilege to visit. Even multi-millionaires can’t simply book a flight there. And that, of course, is something that journalists dream about: visiting places that nobody else can get to. I find the location to be something special and also what is happening there, namely people collaborating and trying to understand something about the world they live in. Because it’s a question that affects all of us: How will the melting of Greenland change the ocean levels? It is about our future.

SPIEGEL ONLINE: What do the Greenlanders themselves say about the research activity?

Christoph Seidler: That is a difficult question. I don’t think they say much at all, because they are busy enough with their lives and survival in Greenland. It is an unbelievably tough environment. They have to worry about trivial things like: “How is the internet connection?” “What is there to buy?” “Where do the kids go to school?” In Greenland, there are still immense social challenges. But to take a half-step back, it’s interesting to think about what effect climate change will have on Greenland. At the moment, Greenland still belongs to Denmark, is partially autonomous and would ultimately like to become independent. And that could happen by earning money from natural resources – either from oil or from the minerals present there. And that is something that very much has to do with the climate change that the scientists there are researching. Simply put, a melting Greenland is a Greenland where it is easier to exploit natural resources. At the same time, a melting Greenland is, of course, also a Greenland where the old laws and rules that have been established over generations no longer apply. Things like, for example: What’s the best way to hunt? How do you know when certain animals will be where? And in any case, because of industrialization, and because of the American military presence since World War II, Greenland has changed significantly, and the society as a whole has yet to recover. If climate change is added on top of all that, the population will find itself faced with huge problems. It’s a pretty onerous assortment of hurdles, so it’s tough to say whether people in Greenland find the scientific research good or bad. But I think, in general, they find those things good that are somehow useful to them and improve their lives.