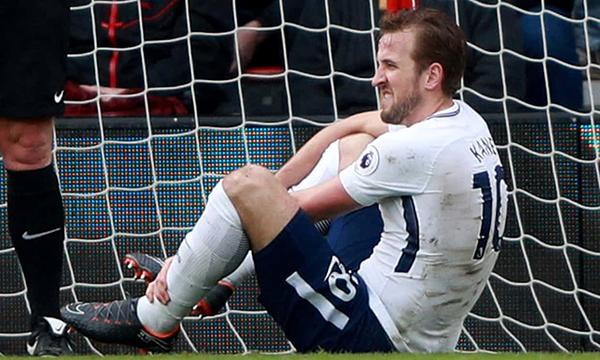 Sachin Nakrani at the Vitality Stadium

Harry Kane is facing a prolonged period out of action and could miss the World Cup after sustaining an injury in Tottenham Hotspur’s 4-1 victory over Bournemouth yesterday that resulted in the striker departing from the south coast on crutches and in a protective boot.

Kane collided with Bournemouth’s goalkeeper, Asmir Begovic, after 34 minutes and during a subsequent tangle of legs, twisted his right ankle. The 24-year-old received treatment but was unable to continue and will undergo a scan today to assess just how bad the damage is.

Mauricio Pochettino declined to put a time limit on how long Kane will be absent but there is obvious concern within the club given the player missed 14 matches last season having hurt the same joint on two separate occasions. The maximum number of games Tottenham can play between now and the end of this campaign is 11, one of which is a potentially decisive encounter with their top-four rivals Chelsea on 1 April.

There are also two England friendlies, against Netherlands and Italy, this month. Gareth Southgate names his squad for the games on Thursday and will almost certainly be unable to call on the striker. The head coach will no doubt be concerned that he could be without Kane in Russia this summer as well. “He [Kane] suffered an injury that is to the same ankle he suffered before,” Pochettino said. “We hope it is not a massive issue. We need to wait until [the scan]. Harry has a great character and is positive. We are, of course, disappointed with his problem but, if you are positive, you start the recovery now.”

Were Kane to be out for a lengthy period it would represent a significant blow for club and country. The striker has scored 35 goals in all competitions for Tottenham this season and has a career total of 12 in 23 appearances for the national team. He is crucial to Spurs’ hopes of finishing in the top four, which has become particularly important following their midweek Champions League defeat by Juventus, as well as to England’s hopes of progressing to and through the knockout stages of this summer’s finals.

Another Tottenham player who may be out of the international games is Dele Alli after he suffered a suspected groin strain. Pochettino insisted it was not a “big problem” but also admitted the player would have to be “managed” in the coming days.

Those injury concerns were the only negatives of an otherwise positive afternoon for Spurs, who took their run of domestic matches unbeaten to 17 thanks to two goals from Son Heung-min, one from Alli and another in second-half stoppage time from Serge Aurier, his first for the club since arriving from Paris Saint-Germain. This was also a show of character for Spurs given they fell behind to Junior Stanislas’s seventh- minute opener. “We are so happy because it is a massive three points for us,” said Pochettino.

Eddie Howe was left to rue the referee Mike Dean’s decision to rule out Callum Wilson’s 83rd-minute equaliser for a push on Davinson Sánchez. Overall, however, the Bournemouth manager was pleased with how his team performed in what was only their second defeat in 11 league games. “My players gave absolutely everything,” he said. “That’s all I can ask.”