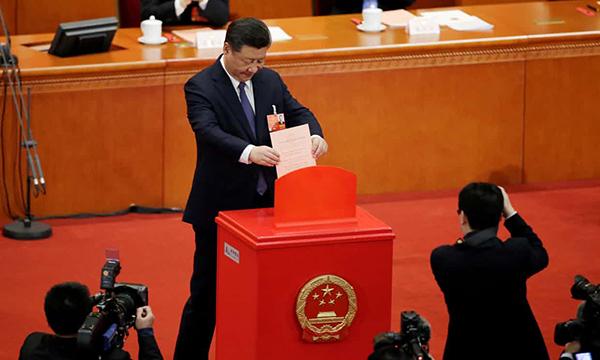 Beijing has hit out at the “shameless” and “malicious” western “naysayers” who have questioned Xi Jinping’s historic power grab, a move that sets the Communist party leader up to rule China for life.

“It has already become a habit for some in the west to speak ill of China’s political system … whenever it comes to China they choose to look at it through tainted glasses,” the China Daily, an English language broadsheet, complained in an editorial.

The state-run newspaper, an international mouthpiece for Beijing, claimed, contrary to the assessment of most independent observers, that the scrapping of term limits did not “imply lifetime tenure for any leader”.

“Yet some people in the west insist otherwise … they revel in their ignorance of China’s reality, and hold fast to their mean, even malicious predisposition towards China’s political system out of their irrational, subjective and unprofessional ideological bias … They have no compunction about making false claims and consider it excusable to speak so shamelessly.”

“We are increasingly confident that the key to China’s path lies in upholding strong party leadership and firmly following … the party central committee with comrade Xi Jinping at the core,” it said in an editorial.

Beijing has painted Sunday afternoon’s vote – in which only 2,964 of China 1.4bn citizens took part – as a reflection of overwhelming popular support for Xi.

Shen rejected claims the move risked plunging China back into an era of strongman rule and political turmoil as “assumptions, conjecture and stretched situations”. Rather, China was moving towards a “brighter and brighter” future, Shen said, according to Reuters.

Western China experts and Chinese liberals fear Xi’s move sounds the death knell for China’s system of collective leadership and returns the country to an era of repressive one-man rule.

“Under Xi Jinping, China is making a U-turn. Personalistic rule is back,” Susan Shirk, a noted China expert who was US deputy assistant secretary of state under Bill Clinton, wrote in a recent essay.