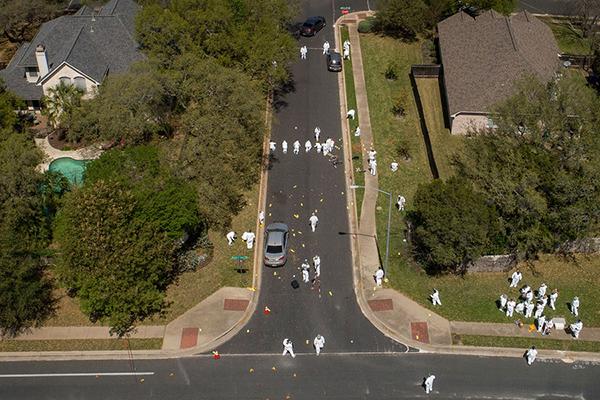 Even as it became apparent that a bombmaker had exploited modern fondness for online shopping to invoke terror, US law enforcement used emerging social dynamics, including Americans’ growing comfort with surveillance cameras, to protect the public.

MARCH 21, 2018  PFLUGERVILLE, TEXAS AND SAVANNAH, GA.—For the past three weeks, Pflugerville, Texas, resident Lee Rocha has endured a fear grown eerily familiar to residents of the Texas Hill Country – a three-week bombing spree that seemed, he says, “to be happening everywhere, to everybody,” making “you afraid to go anywhere.”

After weeks of hypervigilance, Mr. Rocha and others breathed easier Wednesday as authorities closed in on a suspected bombmaker, who blew himself up rather than be captured.

But the relief was only partial. For one, the bomber, whom police identified as Mark Anthony Conditt, lived just a block from Rocha’s house. “I’ve seen him so many times,” says Rocha, who has been a resident of Pflugerville for 28 years.

Confounded at first by the quickly growing string of sophisticated bomb work, police officials say an “army” of investigators ranging from the FBI to local police worked at a frantic pace to gather forensic evidence, build profiles, scour surveillance video, and engage and inform the public – all of which appears to have earned them key breaks that enabled them to triangulate the suspect on Tuesday to a motel parking lot in Round Rock.

“There’s got to be an absolute sense of relief as well as gratitude for this army of law enforcement officials, [for what they] have done,” Austin Mayor Steve Adler told “Fox & Friends.”

So far, Conditt’s motives are not known, though investigators say they have found a “treasure trove” of materials related to the spree.

But even as it became clear that a bombmaker had exploited modern fondness for online shopping to invoke terror, US law enforcement, too, used emerging social dynamics, including Americans’ growing comfort with surveillance cameras, to protect the public.

“This case shows the depths to which law enforcement has to go to meet the challenges of the time,” says former FBI assistant director Joe Lewis, in a phone interview from his North Carolina home. “That they identified the individual as quickly as they did and maintained a low loss of life, that is truly good police work. It shows everybody bringing their best to the table, realizing the potential of extreme harm.”

While the ordeal seemed to unravel in slow motion, authorities closed the case in the same time frame as the D.C. sniper was caught in 2002. The Unabomber case went on for well over a decade until Ted Kaczynski’s brother alerted the FBI. Olympic bomber Eric Rudolph evaded the FBI for five years before a rookie cop arrested him behind a grocery store dumpster in a North Carolina mountain town.

The first bombs in Austin went off in early March, killing two black men, leading to early concerns that the attacks were of a racial nature, in the vein of Jim Crow-era terror bombings. But then a different bomb equipped with a trip wire – this one in a different part of town – blew up, injuring two white men.

Early clues, experts say, would only have raised the alarm for the investigative team. For one, the use of FedEx played on changing dynamics where 8 out of 10 Americans now shop online, compared with 2 out of 10 in 2000. And the bomber seemed to be growing more confident.

The bomber, much like the Las Vegas mass killer, had little social media presence. Clues came slow. But behind the scenes, the investigation likely bordered on frantic, former FBI agents say.

“The first thing the FBI and local police were looking at was the motive: Was this an against-the-establishment type, was he targeting institutions that he disliked?” says former FBI agent Chris Quick, who worked on the apprehension of white supremacist Dylann Roof, who killed parishioners at the Emanuel African Methodist Episcopal Church in Charleston, S.C., in 2015. “Number 2, every bombmaker has a … fingerprint – there is a DNA of the bomb. The DNA of the bomb gives you investigative leads.”

As police worked the case, they struggled to contain panic while being candid about the threat.

A Pflugerville resident named Debbie said she left a package on her porch for four hours before picking it up, but hadn’t wanted to call the police.

Debbie, who declined to give her last name, was shocked to learn the bomber lived in her neighborhood. “I am in disbelief,” she said Wednesday after Conditt’s death. “He lived with his mom, in the garage.”

As the bombings kept coming, law enforcement buckled down, says Mr. Lewis, in hopes of a break.

Authorities were able to recover the battery from one of the bombs, which first narrowed their search: It was one of only a few that had come into the country from overseas. And on Monday, a FedEx employee was treated for ringing ears after a box blew up on the line. Mr. Quick says the contained area may have been instrumental, since it guaranteed that all parts could be gathered.

The discovery of a second, unexploded package led to the identification of Conditt – and security video of the bomber, in a blond wig, dropping off packages for delivery.

That footage, combined with cell phone records, proved instrumental in this investigation. This kind of digital forensics has become an increasingly valuable tool for law enforcement in recent years as investigators have become more familiar with tracking technology and the sheer availability of data has increased, says Don Vilfer, the former head of the White Collar Crime and Computer Crime Unit of the FBI in Sacramento, Calif.

Law enforcement has leveraged cell phone data to track individuals for more than 20 years. But in decades past, the process was somewhat cumbersome, involving an initial triangulation from cell phone towers followed by further localization with specialized equipment. Today, 95 percent of Americans carry a cell phone capable of transmitting its precise location within a matter of feet. And that’s just one trail of digital data that people leave behind.

“We leave digital trails as we travel throughout the day with so much that we do,” says Mr. Vilfer, who frequently testifies as an expert witness on digital forensics. “In the county that I live in they let you volunteer to add your address to a database of available cameras and, in the event there is crime in the area, they can come.”

The number of surveillance cameras in the US doubled from 33 million in 2012 to nearly 62 million by the end of 2016. Privacy concerns have not gone away, but have been muted as digital footage has proven invaluable in solving terrorist attacks on civilians.

“After the Boston bombing [in 2013], communities and government agencies, cities, [overcame privacy concerns] and realized that it is OK to have more surveillance cameras around town so they can readily track people,” says Vilfer.

All of this digital data represents a trove of vital information for law enforcement. But actually finding the relevant tidbits of information in a seemingly endless stream of data presents officers with a new challenge. Computers can assist with the process to a certain extent, but it takes careful and painstaking work on the part of investigators to find useful leads

Get the Monitor stories you care about delivered to your inbox.

In Pflugerville, Ron Simon says the ordeal has been “surreal.” But, he says, he was “pretty impressed” with the investigation. “It seems they were on his trail the last 24 hours. So I take my hat off to them.”

Science and technology editor Noelle Swan contributed to this report from Boston.