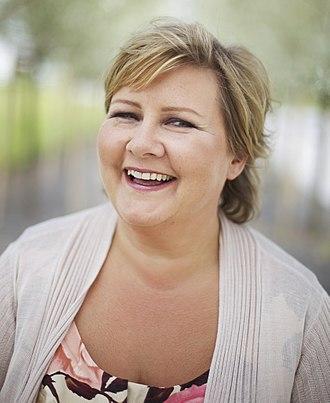 The Yomiuri ShimbunJapan has many obstacles to overcome as it seeks to become a country where women can thrive. What are the roles of men and women in society? What does an ideal society look like? The Yomiuri Shimbun recently discussed these issues with Norwegian Prime Minister Erna Solberg, the female leader of a country renowned for gender equality and its high ranking in global happiness indices. The following is excerpted from the interview.

The Yomiuri Shimbun: The proportion of female legislators (see below) exceeds 40 percent in Norway. Half its ministers are women. How did you achieve such gender balance? What are the results of a gender-equal parliament?

Erna Solberg: I think we became more concerned about issues like childcare and reforms of how you deal with paternal leave. As for the ministers, you always have to look at the best candidates.

Q: What are the driving forces in attaining gender equality?

A: We have a proportional representative system for parliament, so all votes count. So when women started to organize themselves as a result of the women’s movement in the 1970s, political parties became more attentive to women’s ideas and political views. Some parties set a quota for women candidates. I think that was one of the driving forces in the 1980s. In the beginning, we had women’s ministers, but they were for social affairs, and they dealt with soft issues and were not high-level positions in the government.

Q: Yet in your new Cabinet, three major ministers — the prime minister, finance minister and foreign minister — are women, and all the leaders of the three ruling parties are women, too. What are women’s strengths as leaders and in policy planning and decision-making?

A: Women leaders are more group-based, try to organize with other people, and are more cooperative than what you see with traditional male leadership roles. I think that increases the possibility of making a good coalition government.

Q: Does the same hold true for corporate management and the business sector?

A: I think in the business sector there are other difficulties. It is about making the best product to make a profit, for example. Norway introduced a quota for companies: At least 40 percent of board members must be female. This goal was reached in 2008. But despite that achievement, there still has not been a significant increase in women at the top executive level in private companies.

Q: Why is gender equality important?

A: First of all, I think it’s fairness. And then secondly, of course it is good for the economy. The fact that more women are participating in the economy has increased GDP. Seventy-seven percent of women work today [in Norway]. According to some reports, it has contributed more to our GDP than the oil from the North Sea.

Many people ask Norway why economic growth is possible with high welfare. However, we have a publicly funded care system.

In some countries with big differences in income, only rich women who can buy services for childcare, etc. can work or participate in politics.

Q: In Japan, the Abe Cabinet has placed “a society where all women can shine” at the center of its growth strategy, but we still have a long way to go.

A: I think the key here is to talk about work-life balance, because if you ask women to choose between becoming mothers and having a career, I think you will end up with fewer children, and fewer women working. You shouldn’t choose between family and a career.

Q: When I interviewed the gender-equality ombud in 2000, I heard that some men complained to the ombud that they wanted more time to help care for their children.

A: Closeness to your children has become much more important for Norwegian men in the last 20, 30 years. In Norway, the parental leave scheme has a quota that is reserved for fathers (see below). As a result, a growing number of fathers are involved in childcare at an early stage.

Q: What do you think of the roles of men and women in the labor market? Some men complain that their jobs are now threatened by women.

A: Some of the traditional male jobs, especially unskilled labor, are now under attack by technology. For example, in the future, bus drivers probably won’t be needed anymore, because you will have automated bus systems. It’s not women that men should pay attention to. It’s about thinking about your education, what type of job you are training for.

We still need engineers, programmers and others who work with big data. But especially for people who do not have the academic background for such work, there will probably be more momentum to work in care-taking occupations. I think men will lose in the labor market if they don’t start working more — at least in my country — in the health-care sector, for example, not just as doctors, but also as nurses and assistant nurses and other jobs. The same is happening in Japan, because Japan is leading the world in societal aging.

Q: What do you think is necessary for people to be happy? I asked the same question to King Harald V [of Norway] when I was in Oslo in 2001. He said first you need to be in good health. Second, you need to have many friends because we will have less kids. Third is to do something that can contribute to society.

A: People can be happy for very different reasons and in very different situations. All in all, I think one of the things is to learn to enjoy life. Not accept life as it is, but to enjoy all parts of it. And I think mental health is extremely important for also understanding the values of the small things in life: to go walking, to feel fresh air, just to be able to take in everything and feel balanced. This is the starting point for any type of happiness. Even if you are economically well off, if this balance is lacking in your life, it is going to be difficult.

In Norway, people become members of voluntary organizations so they do something besides family and work. They are trying to do something for other people. If it’s singing in a choir or organizing a football event for children, this is also part of what gives people more happiness, because you need to feel that there are people who need you, and that you are important to somebody else.

According to a document of Japan’s Cabinet Office, 61 percent of Rwanda’s legislators are female, the highest proportion among 193 countries surveyed as of Dec. 1, 2017. Norway ranked 10th at 41 percent, and Japan 157th at 10 percent (in the House of Representatives).

A parental leave plan introduced in 1993. Under this system, a portion of parental leave — currently 10 weeks — is allocated to fathers. The right to take this leave will expire if unused.

Born in 1961, Solberg graduated from the University of Bergen in 1986, where she majored in sociology, political science, statistics and economy. She was first elected to parliament in 1989, and has served as minister of local government and regional development, among other posts. Solberg has been leader of the Conservative Party since 2004, and became prime minister in 2013. She has two children.Speech