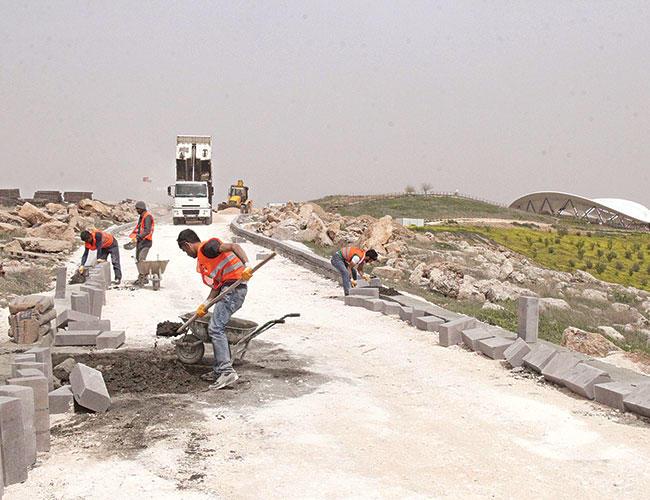 Experts are warning about careless works around the ancient site of Göbeklitepe, considered the world’s oldest temple area, amid reports that the site is being irreparably damaged by “concrete” and “heavy equipment.”

“My sorrow is hard to articulate. Every time I visit there I see another fragmentation coming to light,” said archaeologist Çiğdem Köksal Schmidt following her visit to the site in the southeastern Turkish province of Şanlıurfa on March 14.

“As part of the construction of a protective roof, parts of the wooden walkway have been removed on the assumption that they would be put back later. Now they are building a concrete walkway instead,” added Schmidt, the wife of the legendary late Professor Klaus Schmidt, who previously headed the excavations in Göbeklitepe and died in 2014.

Photos and videos showing the construction of a new walkway and construction equipment on site stirred anger after Schmidt shared them on social media.

The 4,000-square meter protective roof, built at a cost of 6.6 million euros, and the new walkway were planned within the scope of Turkey’s bid to get Göbeklitepe included on UNESCO’s World Heritage Permanent List later this year. The site was included in UNESCO’s tentative list five years ago.

“As far as I can see in the photos they have used concrete. They should not have used such material there, or they should use it as little as possible. There was already a very big roof in the middle of the natural site. We should not use highly modern materials at such sites,” said Associate Professor Necmi Karul, a member of the Göbeklitepe Scientific Board.

Construction work is planned to be completed before the site is reopened to visitors in April.

“The construction work for the visitor center, as reflected in the media, looks like a disaster … They should have moved very sensitively in the protection zone but we can see heavy construction equipment used on the site. It is very worrying that the extraordinary Neolithic remains and the round temple site at the entrance have been exposed to such action. It is unacceptable that such careless construction work has damaged this extraordinary archaeological site,” archaeologist Nezih Başgelen warned.

Upon criticisms of the work at Göbeklitepe, the Culture and Tourism Ministry issued a statement saying “only construction equipment was used” at the site and denying that concrete or asphalt was used.

Protective felt was placed on the soil before construction of the 900-meter walkway started and cube stones were placed on the felt, the statement read, adding that in order to fix the cube stones 30-centimeter thick layers of mortar were grouted under the curbs.

In a separate statement, the ministry described the claims as “baseless and unscientific,” strongly denying that the historical assets have been damaged.

The ministry also announced that an observation visit to Göbeklitepe would be organized soon, with a delegation of experts and journalists.