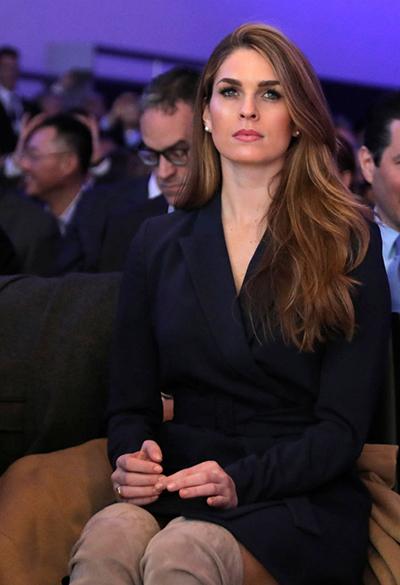 Nuzzi’s sources said that Lewandowski, who was fired from the campaign after allegedly grabbing a female reporter by the arm, was motivated in part by his “unusual preoccupation” with Hicks, who he used to date and who was in a relationship with Porter when the publication of the abuse accusations forced him to resign.

White House officials told the Daily Beast last month that Lewandowski “was digging into Rob’s previous marriages” and that Porter blamed him for helping orchestrate an alleged “smear campaign” to oust him. Lewandowski, who has remained loyal to Trump, has reportedly been angling for a position in the White House for months.

“This had been planned and choreographed and coordinated and known long in advance by a group of people who were trying to play political games,” a source close to the events told Nuzzi, “knowing that this would be part of a larger story related to security clearances and John Kelly and others, seeking to sow chaos and dissension. They saw this as a useful catalyst, which it turned out to be.”

Jennifer Willoughby, Porter’s second wife, told Nuzzi that when Porter pressured her to take down a blog post in which she detailed his past abuses, he referred to a “former staffer” who he said may alert the media about her allegations. Willoughby said she believed Porter was referring to Lewandowski.

Nuzzi writes that there were “plenty of reasons” for Lewandowski to help oust Porter, including that exhibited “Single White Male characteristics,” and was determined to sink Hicks’ relationship with Porter.

“He got wind that she was dating Porter, and he could not handle that,” a former colleague of Lewandowski’s who is close to the White House told Nuzzi. “There were still raw feelings.”

The former Trump campaign manager is also reportedly in a bitter rivalry with White House chief of staff John Kelly, who has attempted to limit the president’s direct communications with friends and outside advisers, including Lewandowski. According to multiple reports, Kelly knew there were issues with Porter’s background that prevented him from obtaining a permanent security clearance.

Nuzzi also pointed out that Lewandowski lives in a townhouse with a former Trump-campaign staffer who worked in the same government agency as Porter’s ex-girlfriend, another Trump administration official who reportedly informed White House counsel Don McGahn that Porter had a violent history with his ex-wives back in November.

But Lewandowski has denied having any prior knowledge about the allegations against Porter or having played any role in his ouster.

“I’ve never had a bad word about Rob Porter,” he told the Daily Beast last month. “I think he did a very good job, and I wish him the very best.”

Lewandowski has also said he didn’t know whether Kelly knew of the allegations against Porter before the media reports in February, but insists that “somebody knew” and should have brought it to others’ attention.

“We saw a problem in the White House a few months back where an individual who shouldn’t have been there continued to have access to information. And that was a failure somewhere,” Lewandowski told CNN’s Chris Cuomo.