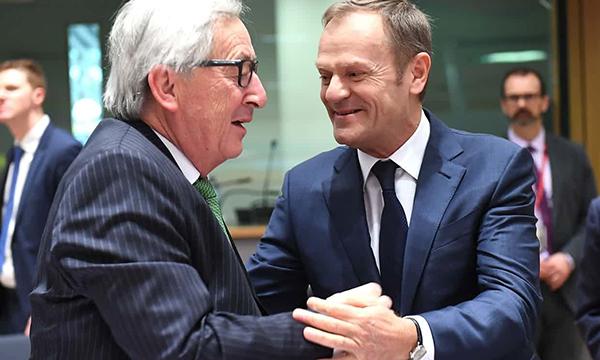 EU leaders will agree in principle on a transition period for the UK after the president of the European council, Donald Tusk, promised Spain that its veto over Gibraltar’s inclusion in the agreement would be emphasised at this week’s summit.

Tusk was forced into last-minute talks with Madrid after David Davis, the Brexit secretary, spooked the Spanish government with his insistence on Monday that the Rock would enjoy the same benefits as the rest of the UK in the 21-month period after Brexit.

The EU leaders will now endorse the transition period terms on Friday, but will publicly reiterate their position that Downing Street must come to a bilateral agreement with Spain over the future of Gibraltar if the disputed territory is to stay in the single market and customs union until 31 December 2020.

The final draft of the EU’s guidelines, leaked to The Guardian, now call “for intensified efforts… on issues related to the territorial application of the withdrawal agreement, notably as regards Gibraltar, and reiterates that nothing is agreed until everything is agreed”.

Speaking in Brussels, Tusk said: “On Brexit, I have some good news for prime minister Theresa May. News that has been awaited in London but also in all the other EU capitals. I have just recommended to our leaders that we welcome in principle the agreement on transition. In practice, the transition phase will allow us to delay all the negative consequences of Brexit by another 21 months.”

He added: “It is important not least for our people and businesses to bide this time so that everyone is prepared for the real impact of Brexit.”

Tusk also told reporters that he would not be sending any congratulations to Vladimir Putin over his re-election as Russian president, given the recent attempted murder of a Russian former spy in Salisbury.

On Monday Michel Barnier, the EU’s chief negotiator, and Davis celebrated agreement over 75% of a 129-page withdrawal treaty, including the terms of the transition period.

However, diplomats were keen to emphasise on Wednesday that, even with the endorsement of the leaders, nothing was concrete until all the outstanding issues were resolved, including the problem of avoiding a hard border on the island of Ireland.

The UK has so far rejected the European commission’s version of a so-called back-stop solution of Northern Ireland staying in the customs union and under single market legislation if a future trade deal or bespoke solution cannot solve that problem.

On Monday May committed to some form of regulatory alignment as a default position in order to move the negotiations on to trade.

The pressure will now be on the prime minister to spell out in the next three months what that will look like. It is understood that Ireland will be insisting on an agreed version ahead of that, before a summit of leaders at the end of June, as a price for the advancement of trade talks over the summer.

A number of capitals still believe the UK will accept it will be best served by staying in the customs union.

One senior EU official said the UK had “done zilch on border controls” that would be required outside the customs union, with no sign of preparations at Dover, Harwich and Heathrow.