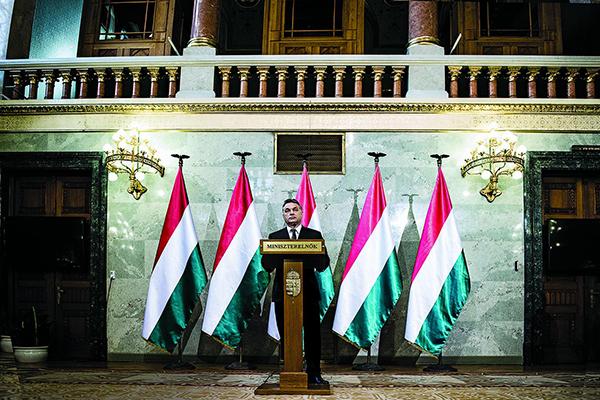 In early March, János Lázár, a senior Hungarian minister, posted a video on Facebook complaining about the lack of “white Christians” in Vienna. Muslim migrants, he warned, were destroying the city—and if someone didn’t do something, they would transform Budapest, Hungary’s capital, in a similar way. “If we let them in…our cities,” Lazar told his followers, “the consequences will be crime, impoverishment, dirt, filth and impossible urban conditions.”

Lázár is chief of staff to Viktor Orbán, the Hungarian prime minister, and his post came about a month before the country goes to the polls in April. It was a classic move from Orbán, something his Alliance of Young Democrats (Fidesz) had done many times before: play to voters’ fears over Islam and immigration. Facebook removed the video, but it became the latest salvo in a political battle that has made Orbán beloved by the far right in Europe—and loathed by anyone left of France’s Marine Le Pen.

That battle began in 2015, when hundreds of thousands of Syrian refugees crossed the Mediterranean and began their journey across Europe, often by foot. When German Chancellor Angela Merkel announced an open-door policy to refugees fleeing Syria, Orbán had a razor-wire fence erected on his country’s border. Across the continent, he was vilified. “The refugees won’t be stopped if we just build fences,” Merkel, who grew up behind the Berlin Wall, said of Orbán at the time. “And I’ve lived behind a fence for long enough.” At a summit in Riga, Latvia, that same year, European Commission head Jean-Claude Juncker greeted Orbán, saying: “Hello, dictator.”

Hungarians were initially sympathetic to desperate refugees sleeping in parks and train stations before trying to reach France and Germany. But their attitudes quickly hardened. A spate of Islamic State militant group (ISIS) attacks in European cities only increased fear and anger toward migrants, most of whom were Muslim. It was a shift, analysts say, that Orbán and Fidesz deftly exploited.

Over the past three years, the prime minister and his party have maintained a narrow focus on refugees, positioning their re-election campaign in opposition to Merkel’s efforts to require all EU member states to resettle a quota of migrants. In response, Hungarian billionaire financier George Soros, who has called for Europe to accept refugees, has also become one of the Orbán’s primary targets. (Soros, who is Jewish, has claimed the campaign against him is anti-Semitic.)

So far, Orbán’s three-pronged attack—against Muslim migrants, Soros and the EU—appears to have worked, although some say the prime minister’s support is waning. Still, most critics say it is not a question of whether his Fidesz party will win in April, but by how much. Which other far-right groups in Europe see as a hopeful sign for what they can achieve.

Orbán had an auspicious start in politics during the dying days of the Soviet occupation of Hungary. In 1989, at a ceremony honoring the Communist leader Imre Nagy—whom Moscow executed decades prior—he called for Soviet troops to leave Hungary. A year later, after the Soviets departed, Orbán won a seat in parliament, where he and his Fidesz contemporaries became known for their fiery speeches and anti-establishment politics.

By the mid-1990s, however, Orbán had persuaded his party, Fidesz, to move far to the right. In a nation invaded and conquered first by the Mongols, then the Ottomans, then the Nazis and finally the Soviets, he realized that playing to nationalism could help them win. At the forefront of his rhetoric: the legacy of the Treaty of Trianon, which in 1920 saw 75 percent of Hungary confiscated and given to Romania, Czechoslovakia and Yugoslavia following World War I. Orbán exploited this sense of grievance and betrayal in the run-up to the 1998 elections, when, at 35, he became the country’s youngest prime minister. Defeated four years later, he then became opposition leader when Hungary joined the European Union in 2004.

After the global financial crisis, which battered Hungary’s economy, Orbán returned to power in 2010, winning a landslide election. One of his first acts in office was to restore voting rights and citizenship to the descendants of Hungarians displaced by Trianon. A two-thirds majority in parliament gave Orbán the power to introduce a new constitution, bring on allies to head both the state audit and prosecutor’s office and pack Hungary’s constitutional court with Fidesz appointees. The prime minister lowered the retirement age for judges, forcing hundreds from office, and had Hungary’s election law rewritten to favor Fidesz.

Meanwhile, Orbán’s coterie of wealthy businessmen and tycoons steadily bought up the country’s dwindling independent media outlets. By 2017, all of Hungary’s 18 regional newspapers were owned by pro-government oligarchs. “That is the great difference between Hungary and the United States,” says Paul Lendvai, the Hungarian journalist and author of Orbán: Europe’s New Strongman. “There is no New York Times or CNN. There are no free newspapers or television. They eliminated them.”

But it’s not just the lack of dissenting voices. In 2017, Transparency International warned that the erosion of institutions in Hungary was among the worst in Eastern Europe, and corruption allegations have dogged Orbán during his eight years in power. According to the Hungarian edition of Forbes, the Orbán family, which once lived in a one-room house in rural Hungary, now has a net worth of 23 million euros ($28.3 million), most of it earned since 2010. In March, the EU’s anti-fraud office began investigating Orbán’s son-in-law, István Tiborcz, over a series of public lighting projects. And the far-right Jobbik party, which would appear to be a natural ally of the prime minister given his anti-immigration rhetoric, has called on him to resign and campaigned with the slogan “You work! They steal.”

Orbán’s spokesman, Zoltán Kovács, says Hungary has no greater issue with graft than the rest of Europe. “We are aware of our own rankings. We are not proud of it. We know that corruption we have to cope with, and the agencies responsible for dealing with it are doing their best.”

In response, Orbán’s anti-immigrant rhetoric has only hardened, with the prime minister portraying himself as his country’s savior, protecting Christian Europe against the Muslim hordes. “Orbán’s rhetoric uses migrant as a negative term,” says András Kováts, president of Menedék, which provides legal aid to refugees in Hungary. “Over the past few years, it is been transformed into something like a swear word.”

The migrant crisis was a turning point for the Hungarian prime minister, both ideologically and strategically, says Lendvai, enabling him to divert attention away from concerns over graft and towards immigration. “The migration issue was…the deciding factor, which helped to turn the tide after Orbán won the second elections. At the beginning of 2015, he was very much down, but he managed to turn it around completely.”

By most accounts, the party’s momentum continued into this year. But on February 25, Fidesz faced a crucial election in Hódmezővásárhely, a southern city near the Romanian and Serbian borders. Ahead of the poll, Fidesz was confident that its anti-migrant, anti-Soros message would resonate in a region once overwhelmed by refugees. So it came as a shock to many across the country when an independent, Péter Márki-Zay, won with 57 percent of the vote. Turnout, which was less than 40 percent during the last election in 2014, was a record high.

Critics began wondering if voters had grown tired of Orbán’s message. The day after the result, Daniel Makonnen, who works at Soros’s Open Society Foundation, says dozens of anti-migrant posters that lined the main road between the Budapest airport and the city center “were taken down overnight.”

Within Hungary, some suggested that economic concerns and corruption were of more concern to voters than fear-mongering over migrants. “On education, on health care, money is really not going…[into] these sectors that are underperforming,” says Zsuzsanna Végh, Budapest-based associate researcher at the European Council on Foreign Relations. “Whereas a lot of money is going to building stadiums. People are fed up with that.”

Others are less sure about the public’s frustration. Mariann Őry, who runs foreign news at the conservative Hungarian daily Magyar Hírlap, points out that Fidesz lost in Hódmezővásárhely only because every other party backed Márki-Zay in an unprecedented show of political unity. Nationally, Fidesz is still polling at over 40 percent, with its closest rival, the extreme-right Jobbik, at 19 percent. “There is no consensus among opposition politicians…when it comes to coordination,” says Őry. “It seems to be a theoretical idea only.”

Kovacs, Orbán’s spokesman, also says the party’s loss in Hódmezővásárhely was an anomaly, and that the anti-migrant and anti-Soros rhetoric continues to serve the purpose it always had for Fidesz. “This is how you can get your message understood.”

That message, according to Kovács, still resonates in Hungary—and across Europe. While many on the continent balk when Orbán refers to migrants as a poison, Kovács says, “We maintain that it is only through…outspoken language—and sometimes a little bit of overdose of that—you can point out the reality on the ground.”

Today, Orbán is a figurehead for the far right across Europe—and even among some in the U.S. On March 9, before a speech at a rally in France, former White House chief strategist Steve Bannon told The New York Times that Orbán was a “hero” and “the most significant guy on the scene right now.” The prime minister was the only European leader to endorse Donald Trump in 2016, and the American president has since referred to Hungarian leader as “strong and brave.”

Within Europe, some of Orbán’s early allies have faded. France’s Marine Le Pen and the Netherlands’ Geert Wilders both lost elections in 2017. But his ideology remains potent. In March 2018, Italy’s far-right Five Star Movement became the biggest political party in the country. And the leader of Austria’s far-right Freedom Party, Heinz-Christian Strache, is now vice chancellor.

Őry, the Hungarian journalist, says that while it is not exactly fashionable to praise Orbán in liberal, European circles, that does not mean his support isn’t there. “I know it’s a non-PC opinion in the West to like Orbán,” she says, “but if you look at the articles about him and jump to the comment section, the readers usually like him a lot more than the journalists.”

Since 2014, when the prime minister infamously outlined his vision of “illiberal democracy” during a speech to ethnic Hungarians in Romania, strongmen—and, with the exception of Le Pen, it does tend to be men—have idealized Orbán. In 2011, Poland’s far-right doyen Jaroslaw Kaczynski said Orbán “gave us an example of how we can win”—and four years later, his Law and Justice Party took power. Other allies include Russia’s Vladimir Putin, Turkey’s Recep Tayyip Erdogan and China’s Xi Jinping, who recently abolished China’s two-term limit, effectively meaning he can govern for life.

For a global retinue of leaders and keyboard cheerleaders, Orbán has served as a paragon of what can be done with the right cocktail of rhetoric, circumstance and an unfettered will to power. But for Lendvai, a Jewish Hungarian who lived through both fascism and communism, Orbán’s apparent impenetrability raises the specter of that most typical of the afflictions of power: hubris.

“Power can blind you,” says Lendvai. “The odds are still in favor of a Fidesz victory, but it is unlikely to be a triumph, and everything that weakens Orbán and his regime is a victory for democratic forces.”