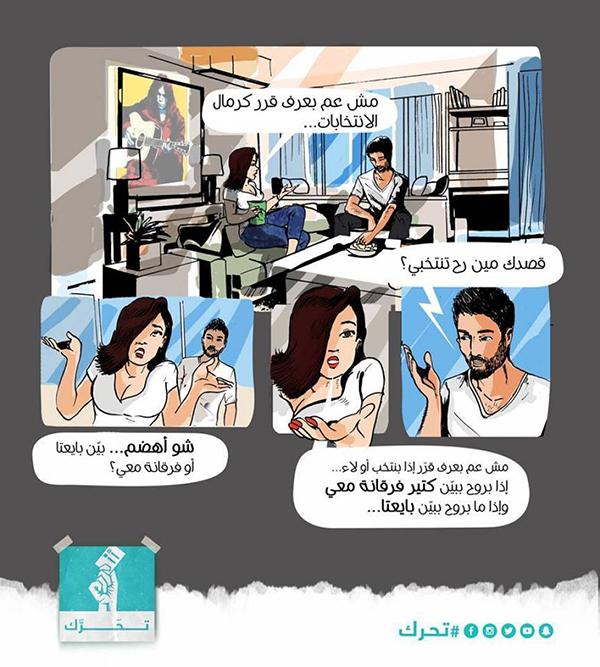 Elections are for everyone, and not only for those who choose to vote.

BEIRUT: A comic book, one of a thousand others, was found on someone’s car in Hamra Street, Beirut. It was titled Elections, the Lebanese Way; and on one of its pages, a lady is drawn next to her words: “I wish I can vote for George Clooney instead of all of those candidates.”

Although there wasn’t any author’s name on the small brochure, the back cover read: “تحرّك,” Arabic for “Take Action”.

Further information on that comic, which is one of many other mediums used to raise  awareness among first-time voters in Lebanon’s 2018 parliamentary elections, was stated in an interview Annahar conducted with Maher el- Ghadban, Social Media and PublicRelations Officer at Take Action.

“The comic is one of the ‘catchy’ mediums we use to get more people to be encouraged to vote through the campaign,” El- Ghadban said, mentioning that the campaign was created as a result of a collaboration between DPNA (Development for People and Nature Association), LOST (Lebanese Organization of Studies and Training), MARCH, and UTOPIA.

Mainly, the youth awareness campaign, aiming to encourage the young to participate in the elections, started in 2017, yet the extension of the parliament for several years hindered its completion and progress.

But, “the real work started in December,” El Ghadban said.

Lebanon’s Parliament ratified on June 16, 2017 a new election law based on proportional representation, ending years of political bickering over the adoption of a new parliamentary electoral system.

The ratification of the new law was coupled with the extension of Parliament’s term for an 11-month period. It marked the third time the legislature has extended its own tenure since parliamentary elections were last held in 2009.

By focusing on social media platforms, Take Action creates infographics, vox pops, and various types of multi-media, in order to pass “real knowledge” about elections to first-time voters, whose ages range from 21 to 29 years old.

“We focus on those who can vote this year, by interacting with them on why they would or would not vote,” El Ghadban said.

With page likes increasing from 100 in December to reach around 30,000 likes in March, a huge amount of interaction is surely taking place on Take Action’s Facebook posts.

The campaign believes that “Elections are for everyone, and not only for those who choose to vote,” and this is one of the main reasons why the team behind it tries its best to deliver all the necessary information regarding elections.

“Everyone knows that voting is a right, yet not everyone wants to vote,” El Ghadban says.

Last December, people’s comments on Take Action’s posts were focusing on “I feel disappointed, and not being able to make a difference,” yet that changed a lot with time.

El-Ghadban mentions that more people are interacting on social media and during Take Action’s visits to various Lebanese regions, mentioning that “more people are encouraged to vote, although at the beginning of the campaign, they were asking questions such as: why would I stand in line and wait? Would my vote be of benefit anyway?”

While some posts inform social media users about the role of MPs, other posts focus on explaining various aspects of the new electoral law, the preferential vote it includes, and many other things related to elections.

Currently, Take Action has a main page entirely focusing on Lebanon, and along with 7 other pages targeting the following regions: Baalbek, Hermel, Beqaa, Tripoli, Akkar, North, South, and Nabatiyye. As for Beirut, it is covered in Take Action’s main page.

Through their periodical visits to various Lebanese districts, Take Action team focuses on conducting interviews with “first-time-voters,” in addition to interviewing other people as well.

“We are interested in contributing to their political awareness and political maturity,” El Ghadban says.

Receiving real information seems to be vital among Lebanese youth; especially that the information Take Action posts is taken from the Lebanese constitution, and from other official documents received from the Ministry of Interior.

However, “Take Action does not collaborate with political bodies,” El Ghadban mentions, stressing that “all NGOs collaborating together in the campaign are politically neutral.”

The campaign, which addresses its audience in Arabic, since “we should be speaking our mother tongue in Lebanon,” also replies to the concerns sent to them in English or French.

There is nothing decided yet on whether Take Action will continue after the parliamentary elections, since “as soon as they start and people start voting, the campaign’s goal would be accomplished,” El Ghadban mentions.

There were some challenges, however.

These challenges included reaching people at the beginning, since “many of them had concerns of whether the campaign belonged to any political party.” El Ghadban says, adding “we made it clear that we do not belong to anyone, and we are only interested in raising participation in the elections.”

On March 28, people will get to dig deeper into “Take Action,” through a concert. It is also for free since the campaign refuses to make profit out of it.

There isn’t much information mentioned about the concert on their Facebook page, since the team wants to keep it a surprise.

The bands that were chosen, however, were based on the target audience’s music taste and preferences.

Take Action expects more people to participate in the upcoming elections. “If we were to judge based on the page’s analytics, which is the only thing we have now,” Ghadban says, “then approximately 70% of the page’s followers will vote in May’s elections.”

The page has contributed to having someone run for elections. The lady, in her 30s commented in January asking: “Why would I vote?” Take Action replied: “Why wouldn’t you vote?” So, she then replied: “Nothing will change.”

After a short conversation on the comment section, she said: “I will run for the elections,” and that is really what happened.

Annahar asked a number of first time voters why they would or would not participate in the upcoming parliamentary elections, and the results were as follows:

28-year-old, Yeghia Tashjian, who’s pursuing his MA in Public Policy and International Affairs at AUB, said that he will vote because it’s his duty as a citizen; he wants to practice it and he wants his voice to be heard. “I want to be able to bring change in my constituency, after waiting for 8 years,” he added.

Mohamad Kleit, a 27-year old journalist, said that if he does not vote, he would be responsible for the outcome as well. “So, I don’t have any reason to nag if I didn’t partake in the process,” he said.

Kleit finds it unfair to vote with a whole list.

“Why am I only obliged to pick one list when I might have preferable candidates from another, or maybe I want to cherry-pick candidates that have worked in the parliament while supporting independent candidates that I trust? It’s utter non-sense,” he commented.

Sarah al-Outa, a theater student, mentioned that she will not vote since the electoral law itself doesn’t represent her political values and beliefs.

Rabih Jaafar, who is also pursuing his MA in Public Relations, sees that “voting means I can hold the winners responsible in case they don’t fulfill their obligations and program.” He added: “I was nagging all this time about wanting a change to take place, so it’s impossible to miss such a chance.”

Hauvick Habéchian, on the other hand, a film critic, just wrote the following quote by Ken Livingstone: “If voting changed anything, they’d abolish it.”

Nadine Jouny, an activist in her 20s, who was mainly known for being one of the people fighting for mothers’ right of child’s custody after divorce, said that she will not vote during the first time that she is allowed to (May 2018).

“No one has presented any electoral program that is up to my expectations,” she said, adding that “civil society candidates have not proven to know all people’s needs, especially that they had enough time to enter various neighborhoods in order introduce themselves to people, but they did not do so.”

Maya Arnaout, a 31- year-old Project Manager, said that she wishes she voted in Beirut, her place of residence. “In Saida, there isn’t any party that represents me, so I believe I won’t be voting this year,” she mentioned.

According to Arnaout, the blank ballot will benefit the parties that are already in the parliament.

Sarah Farhat, also a first-time voter in her 20s commented: “I will vote for anyone who’s against the current politicians, even if it was Satan himself.”

She added: “We don’t have anything to lose.”