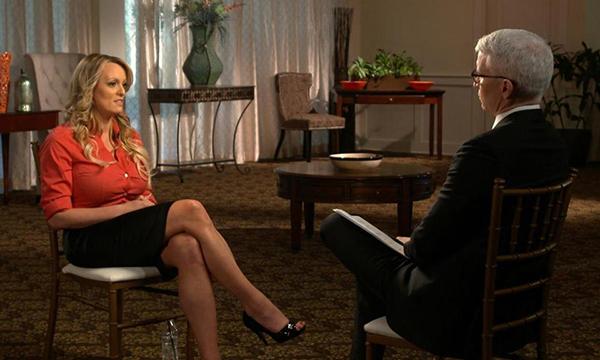 WASHINGTON — Stormy Daniels is proving that she is the master of the prolonged reveal.

Over the last two and a half months the adult film actress and her lawyer have rolled out a textbook negative media campaign against the master of media manipulation, with a series of tantalizing details and disclosures that has provoked a storm of salacious and damaging news coverage.

And the worst for President Trump, who is in the rare position of struggling to win a tabloid-style media war, is yet to come. Daniels, whose real name is Stephanie Clifford, is scheduled to appear in a “60 Minutes” segment on Sunday in which she is expected to tell plenty more about her alleged affair with Trump in 2006.

“They’re using all his devices: innuendo, bombastic statements, tweets, spokespeople,” said Ryan Williams, a Republican operative who worked for Mitt Romney, whose most enduring scandal was putting the family dog on the roof of the car during a 12-hour drive.

“It’s his playbook that she’s using,” Williams said, comparing Daniels with the president. “Just like Trump, she seems to subscribe to that theory that all press is good press. And she’s using it against him.”

If it were just a reality show plot line, you could call it the ultimate comeuppance for Trump, the former “Apprentice’’ star who was said to call up New York tabloids, posing as someone else, with details of his own playboy lifestyle. But the sordid tragedy of this tale is sweeping up the political world and wreaking havoc across the GOP spectrum.

Not incidentally, a good deal of damage is being inflicted on First Lady Melania Trump, who so far is stoically enduring the humiliation.

“When Trump was a TV host, this type of story would have appeared on Page Six of the New York Post instead of the front page of The New York Times,” Williams said.

Trump and Daniels first met at a celebrity golf tournament in Lake Tahoe in 2006, about four months after Trump’s youngest son, Barron, was born. Daniels later asserted — in an interview with InTouch magazine that was conducted in 2011 and published earlier this year — that they had sex after dinner in Trump’s hotel suite.

Less than two weeks before the 2016 election — and after speaking with several media outlets — Daniels reportedly agreed not to speak about the affair. She signed a nondisclosure agreement in return for a $130,000 payment that was handled by Trump’s longtime attorney, Michael Cohen. Cohen has admitted to making the payment, which he says came out of his own pocket and was not part of the Trump campaign.

Over the past several weeks, Daniels has hired a new attorney and has waged a battle to free herself from the agreement. She has claimed that it is not valid, partly because Trump — whose name was listed on the initial agreement as David Dennison to hide his identity — did not sign it.

Trump’s attorneys last week began pursuing damages of $20 million from Daniels, saying that she had violated the agreement. Cohen has also obtained a temporary restraining order to prevent Daniels from speaking out. But the Trump team’s efforts to silence Daniels have only added fuel to the tawdry controversy.

Throughout it all, Trump himself has been in the rare position of not being the star of the show. He’s an uncooperative supporting actor — and an uncharacteristically silent one at that.

The White House did not respond to requests for comment for this article.

Trump has eschewed the advice of his lawyers and attacked special counsel Robert Mueller, who is investigating Trump 2016 campaign contacts with Russia, but the president has not mentioned Daniels.

“The two people he won’t talk about are Stormy Daniels and Vladimir Putin,” said Rick Wilson, a Florida-based Republican operative.

Wilson, who helped lead a Republican anti-Trump effort during the 2016 campaign, expressed admiration for Daniels’s ability to keep her story alive.

“She understands in some ways even better than Trump how to ration out a story,” he said. “Trump has a great animal cunning about that stuff. But she really has it. She has it in spades. She’s shown just enough leg each time the story takes a turn to keep the story moving. And Trump’s people have done every stupid thing in the book to keep the story moving, too.”

Daniels seems to be relishing the attention, while gamely batting away criticism. Her Twitter feed is a stream of people accusing her of being a prostitute, making fun of her age, or calling her a greedy attention seeker. She engages, she doesn’t disagree, and she usually tosses in a fair amount of sexual innuendo.

“Do you have no shame?” someone wrote to her on Twitter the other day. “Even if true, nothing worse than a kiss and tell.”

Last week her attorney, Michael Avenatti, said publicly that Daniels had been “physically threatened.” He would not say who issued the threat, or when. More information would come later, he said. The skimpy development and lack of context did not stop the media from giving the story a new round of coverage.

On Tuesday Avenatti released an image of Daniels taking a lie detector test about her relationship with Trump. Her affirmative answers to having unprotected sex with Trump were cleared as true by the test administrator, America’s citizens were told. That news set off another two days of frantic coverage.

It has all put Trump in an unusual political and legal box. Staying silent runs counter to his self-proclaimed willingness to always punch back at his critics.

Daniels is different from most of Trump’s other accusers because she is not claiming that Trump was abusive or touched her against her will. She says their affair was consensual — and she now wants permission to share more about it.

She is also a far more willing participant in stoking the media frenzy than past participants in presidential affairs.

“Monica Lewinsky disappeared,” Sesno said. “We never heard from Monica Lewinsky. She didn’t do interviews, she didn’t go to events. She had a lawyer speaking for her, but to defend her honor, not to assert her identity as the woman who had the affair with the president.

“Not only does [Daniels] not shun the limelight, she seeks it,” he added.

The legal problems for Trump escalated this week on another front. Karen McDougal, a former Playboy model, filed a lawsuit Tuesday attempting to be released from a 2016 agreement not to speak about her own alleged consensual affair with Trump. The parent company of the National Enquirer, whose chief executive is close to Trump, paid her $150,000 for the rights to her story but never published anything, according to a lawsuit McDougal filed Tuesday in Los Angeles.

A state judge in New York also denied an attempt by Trump’s lawyers to block a defamation suit filed by Summer Zervos, a former “Apprentice” contestant who alleges Trump sexually harassed her.

Wilson said that his group was able to find at least eight women who had signed nondisclosure agreements after having affairs with Trump, but that his group was unable to persuade them to speak out for fear of retribution. If Daniels is successful in getting her agreement voided, other women could come forward. Avenatti has also said that he has been approached by six women with similar accounts.

The White House, as well as Cohen’s attorney, Lawrence S. Rosen, did not respond to requests for comment about the potential for additional accusers.

“If this is ruled unenforceable or questionable, you’re going to end up with a flood of these women,” Wilson said. “A flood.”

Matt Viser can be reached at [email protected].