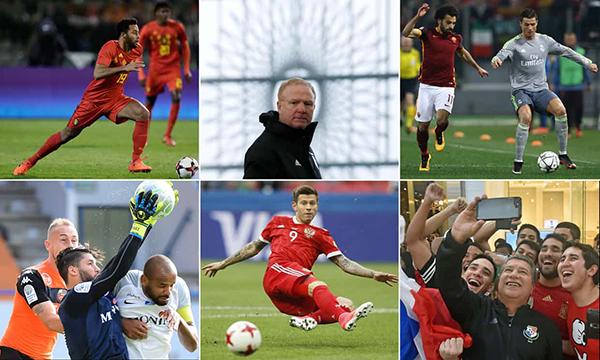 1) A chance to see Ronaldo and Salah face off

Zurich is not an obvious venue for Portugal to face Egypt but may, at least, afford Fifa bigwigs the opportunity to pop out of the office and watch two of the players they hope will offer good news stories at their tournament. Mohamed Salah has, on numerous occasions during a remarkable season with Liverpool, looked the nearest thing the Premier League has seen to Cristiano Ronaldo since the latter joined Real Madrid in 2009; Ronaldo has modified his game now but this is still a welcome chance to see them spar. There are broader similarities, too, in how their national teams rely on them: until Euro 2016 Ronaldo’s eminence sometimes verged on a curse for Portugal and, while that is not quite the case for Egypt, their hopes of a run to the latter stages this summer would be starkly reduced were it not for the Salah’s influence. Here is a chance for both teams, then, to prove they have the better hitman as well as the superior support network. NA

2) France newcomers on show while Pogba aims to prove point

Wissam Ben Yedder’s two goals for Sevilla at Old Trafford not only drove José Mourinho to a long and weird reflection on football heritage but also convinced Didier Deschamps to give the striker a first senior call-up at the age of 27. Les Bleus are not exactly lacking offensive options but Ben Yedder, a wriggly predator, offers different qualities to other central strikers such as Antoine Greizmann and Olivier Giroud. If he takes his chances during the friendlies against Colombia and Russia, then Alexandre Lacazette, for one, can probably forget about making a late bid for a place in France’s squad. There are starting places up for grabs in defence, especially at left-back, where Atlético Madrid’s Lucas Hernández could be given an opportunity to play his way ahead of Lucas Digne and to the top of the pecking order (unless Manchester City’s Benjamin Mendy regains fitness). And then, of course, Deschamps and many other observers will be eager to see how Paul Pogba performs in his first appearance since that Sevilla mishap. PD

This would be a worthwhile time for England, who have scored twice in their past four games, to show they are good for a goal or two but Harry Kane’s absence complicates that and Gareth Southgate is left with a squad that looks rather thin. Most of the interest, since his selection for the Holland and Italy friendlies, has been in more defensive areas. If James Tarkowski and Alfie Mawson are welcome – and deserved – call-ups it still looked a bold move to dispense with Gary Cahill despite his lack of action at Chelsea. Cahill would have been obvious warrior material in Russia but his hopes now hang by a thread. It shows that Southgate is committed to developing England’s style of play and underlines the thought that a realistic aim for this summer may be to keep building for the future. That is the only option available to both their opponents over the coming week. NA

Victory for Russia against a Neymar-less Brazil would not exactly be a panacea for the various problems that beset the country but it might at least perk up the narrative around their World Cup chances. Yet their manager, Stanislav Cherchesov, appears cursed: he had already seen defenders Viktor Vasin and Georgi Dzhikiya sustain cruciate ligament injuries when, a week ago, forward Aleksandr Kokorin was afflicted similarly during Zenit ’s defeat to RB Leipzig. All three will probably miss this summer’s tournament and Kokorin’s case is particularly damaging. He has not always been in favour with Cherchesov for a variety of reasons but is one of perhaps three Russia players with the capacity to harm top-level opponents. The other two, Fyodor Smolov and Alan Dzagoev, will have to carry the fight without him. The revamped Luzhniki Stadium is a wonderful venue and a statement win over Brazil there – or perhaps against France in St Petersburg on Tuesday – might inject some belief, but they will have to do it the hard way. NA

5) Behold the second coming of McLeish

A wave of euphoria to greet the return of Alex McLeish as Scotland manager, more than 10 years after the end of a valiant Euro 2008 qualification campaign, has yet to reach a detectable level. Ticket sales so far suggest that when McLeish begins his second spell in charge in Friday’s friendly against Costa Rica, Hampden Park will be half-full. But the blue-sky thinkers who do turn up could witness the international debuts of players who could go on to have significant careers, most obviously Scott McTominay. With Scott Brown now retired and Darren Fletcher omitted, a critical central midfield spot is up for grabs and McTominay looks to have the ability to seize it. Fulham midfielder Kevin McDonald is among the others eager for a chance to make a strong first impression, along with Swansea striker Oli McBurnie, Wolves full-back Barry Douglas and Aberdeen defender Scott McKenna. And with Craig Gordon absent, McLeish could entrust the goalkeeping spot to another debutant, Hearts’ Jon McLaughlin, or to Allan McGregor, the 36-year-old who has not played for his country for a year. PD

Martin O’Neill has overseen more good results than bad ones during his two campaigns in charge but the way the last one unravelled, reaching a nadir with that shabby 5-1 play-off defeat by Denmark, left many fans yearning for a new manager. O’Neill, too, has called for “freshness” and, after deciding to remain in charge, he hopes new players will enable him to perform a revamp of sorts. He has included eight uncapped players in the squad for Friday’s friendly in Turkey. Wolves’ Matt Doherty is an overdue inclusion and, with Séamus Coleman likely to make his long-awaited return at right-back, may start on the left. But the most exciting of the newcomers is probably West Ham’s 19-year-old Declan Rice, who could be deployed either in midfield or in central defence, where his composure on the ball could bring an extra dimension. Sean Maguire, Conor Hourihane and Scott Hogan, all capped but inexperienced, may also get opportunities to stake claims for more regular action and give fans hope they can look forward to the next campaign, after all. PD

7) Will Dembélé play his way into starting role for Belgium?

Moving to China may be seen by some as a lucrative form of footballing retirement but that is not Roberto Martínez’s view. Axel Witsel has retained his place in central midfield since upping sticks to Tianjin Quanjin 14 months ago despite competition from Radja Nainggolan and Mousa Dembélé. But the Spurs player has been one of the most dominant midfielders in the Premier League; will that convince Martínez to give him a shot at anchoring the midfield against Saudi Arabia on Tuesday? Dembélé has never done himself justice on the international stage but, at 30, Dembélé appears to be in his prime and it would be a shame if he did not play his way into a World Cup starting place. PD

Panama’s last venture into Europe, a 1-1 draw against Wales in November, captured relatively little attention but things have changed since then. They play in Denmark on Thursday and Switzerland next Tuesday, which means scouts – of professional and armchair stripes – will have their eyes trained on how Hernán Darío Gómez’s team might threaten England. There are, we often hear, few unknown quantities in football anymore but Panama – whose squad for these assignments includes three domestic-based players and others from leagues such as those of Guatemala and Peru – are as close to that as Russia 2018 will offer. The Danes are, quietly, looking a dark horse to make inroads this summer: they are unbeaten in 11 games and, with Christian Eriksen and Andreas Christensen, have the core of a very competent squad. Panama will be happy to save their surprises for the biggest stage, but any kind of spark in Copenhagen may send the Iceland comparisons into early overdrive. NA

Tunisia, who will open their World Cup campaign against England in June, begin their preparations by hosting Iran in a friendly on Friday before taking on Costa Rica in France on Tuesday. Their manager, Nabil Maâloul, is hoping several new call-ups will resolve some thorny issues. For instance, like England, Tunisia have goalkeeping doubts. Their No 1 throughout the qualifiers, 33-year-old Aymen Mathlouthi, who moved to Saudi Arabia’s Al Baten in January, lost his place there after a woeful start. So Maâloul is likely to give an international debut to Moëz Hassan, a 23-year-old on loan from Nice at Chateauroux. In central defence, meanwhile, the concern about the form of Marseille’s Aymen Abdennour is such that his spot could be assigned to Yohan Benalouane, who, at 30 and without having made a Premier League appearance for Leicester this season, has decided to answer Tunisia’s call. PD

What a shot in the arm it was for Northern Ireland when Michael O’Neill rejected Scotland in January and subsequently signed a four-year extension to his contract. Sometimes an era reaches the end of its natural cycle but there was never really any sense of that around what O’Neill has built, even after such a narrow and frustrating play-off defeat to Switzerland. The job now is to keep the same momentum and feeling that have taken them this far although O’Neill has made a couple of tweaks for the visit of South Korea. Jamal Lewis, a 20-year-old attacking full-back who has made a big impression at Norwich City, will get his chance and the goalkeeper Conor Hazard, on loan at Falkirk from Celtic, is also selected. It would certainly blow any cobwebs away if they disposed of a South Korea side spearheaded by the in-form Son Heung-min. NA