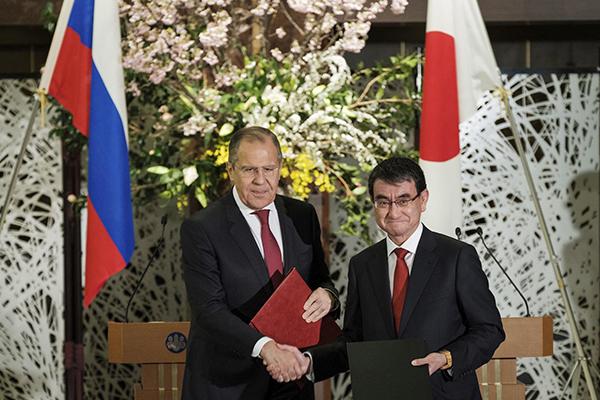 The foreign ministers of Japan and Russia expressed conflicting stances on Wednesday about Japan’s planned installation of a U.S.-made land-based missile defense system, while making little concrete progress on a long-standing territorial dispute.

At a joint press conference after his first meeting with a foreign counterpart since Russian President Vladimir Putin won a fourth term, Sergey Lavrov expressed concern that the Aegis Ashore system “will have a direct effect on Russia’s security,” effectively becoming part of the U.S. missile defense network.

Japan’s Taro Kono, meanwhile, asked for Russia’s understanding, saying the system which his nation will operate independently “will not pose a threat to any neighboring country, including Russia.”

Japan says the system will increase its ability to intercept ballistic missiles from North Korea.

The ministers also discussed preparations for a planned summit in May between Prime Minister Shinzo Abe and Putin in Russia. Abe has positioned the summit as a chance to make progress on the bilateral row over the sovereignty of a Russian-held chain of islands.

Kono and Lavrov agreed to speed up negotiations on the projects ahead of the May summit, and Lavrov said the talks so far have been “moving along in a good atmosphere.”

But measurable progress has been slow since Abe and Putin agreed in December 2016 to begin discussing joint economic projects on the islands.

Japan and Russia still need to work out the details of a special system that they have agreed is necessary in order for the projects not to compromise either side’s legal position on the islands’ sovereignty.

Called the Northern Territories in Japan and the Southern Kurils in Russia, the islands were seized by the Soviet Union at the end of World War II. The disagreement over their sovereignty has prevented Tokyo and Moscow from signing a postwar peace treaty.

Japan hopes the projects, in various fields including tourism and aquaculture, could eventually lead to a settlement on the islands, while Russia stands to benefit economically.

After their talks, Kono and Lavrov signed a dialogue plan that lays out bilateral meetings to be held this year and in 2019. According to the Japanese Foreign Ministry, it is the third such plan adopted between the countries, and covers both bilateral and international issues.

Lavrov said that during Abe’s Russia visit in May, he and Putin will participate together in a ceremony to open a year-long bilateral cultural program.

At a working lunch that followed the press conference, Kono and Lavrov agreed to coordinate efforts toward the denuclearizing North Korea, the ministry said.

The new dialogue plan includes a meeting between the Japanese and Russian representatives to the stalled six-party talks toward denuclearization of the peninsula. The other four parties to the talks are North and South Korea, China and the United States.

Wednesday’s meeting took place amid an international uproar over the use of a nerve agent to poison a former Russian spy in a city in southern England earlier this month.

Britain and many of Japan’s other peers have blamed Russia for the attack, and Japan has condemned the use of chemical weapons while refraining from pointing the finger at Moscow.

Russia has denied any involvement in the poisoning.

Lavrov said Russia has requested that Japan ask Britain about the current whereabouts of Sergei Skripal and his daughter Yulia and why the country assigned blame for the attack so quickly.

“The use of chemical weapons cannot be tolerated,” Kono said at the press conference, without suggesting Russia was responsible.

“The most important thing is ascertaining the facts,” he said.