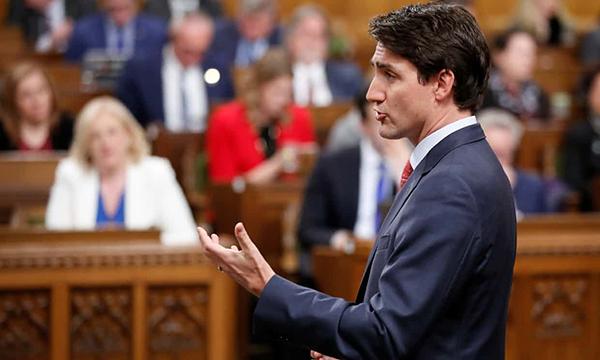 Justin Trudeau has defended his government’s decision to sign off on the sale of more than 900 armoured vehicles – including dozens described as “heavy assault” and equipped with cannons – to Saudi Arabia, arguing that the deal is in line with Canada’s foreign and defence policies.

The C$15bn ($11.63bn) deal – struck by the previous Conservative government in 2014 and given the green light after Trudeau became prime minister – has been in the spotlight in recent years amid growing concerns about Riyadh’s human rights record.

The initial order was for hundreds of light armoured vehicles, including 119 described as “heavy assault” with 105-millimetre cannons. Another 119 of the vehicles were configured as “anti-tank” while 119 featured a two-man turret and 30mm chain gun and were designated as “direct fire” support.

The agreement may have been modified since it was drawn up in 2014, the CBC noted. Delivery of the vehicles was slated to begin in 2017.

The revelations were put to Trudeau by opposition politicians on Tuesday in the House of Commons. Hélène Laverdière of the New Democratic party pointed to reports of the kingdom’s attacks on its own civilians as well as the Saudi-led campaign in Yemen, where conflict has killed more than 10,000 people and displaced more than 3 million.

“So I am asking the prime minister, what does he think about Canada potentially being complicit in international human rights violations?” Laverdière asked. “How can we say Canada’s foreign policy is progressive and feminist when we continue to sell arms to Saudi Arabia?”

Trudeau responded by arguing that his government had little choice but to respect the contract signed by the previous government. “Permits are only approved if the exports are consistent with our foreign and defence policies, including human rights,” said Trudeau. “Our approach fully meets our national obligations and Canadian laws.”

Cesar Jaramillo of Project Ploughshares, a Canadian disarmament group, described Trudeau’s response as “flawed logic”, as it is up to his government to set out the parameters of Canada’s foreign and defence policy.

After launching an investigation, Canada’s foreign minister, Chrystia Freeland, said in February that no conclusive evidence had been found to suggest that vehicles made in Canada were being used to violate human rights in the kingdom. The government has since refused to release a copy of the investigation, despite campaigners’ questions over how it arrived at its conclusion.

As the international organisations that track human rights continue to rank Saudi Arabia among the world’s worst violators, countries such as Germany and Belgium have denied export applications for arms headed to Saudi Arabia. In 2015, Sweden cancelled a longstanding defence agreement with the Saudis, citing similar concerns.

In contrast, Britain has pushed forward with arms sales to Saudi Arabia, with government data showing sales climbing to £1.1bn ($1.56bn) in the first half of 2017.

On Tuesday Donald Trump touted US arms sales to Riyadh as he welcomed Saudi Arabia’s crown prince to Washington. “Saudi Arabia is a very wealthy nation, and they’re going to give the United States some of that wealth, hopefully, in the form of jobs, in the form of the purchase of the finest military equipment anywhere in the world,” the US president told reporters.