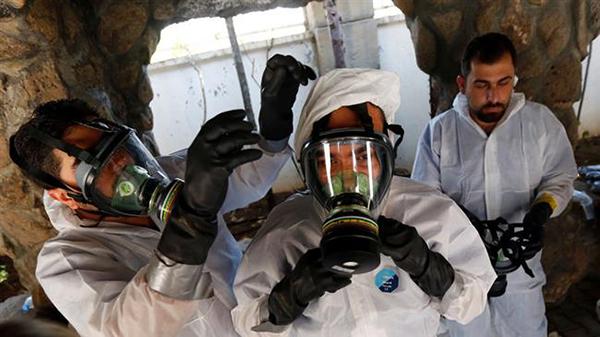 “More than 40 tons of poisonous substances were found on the territories, liberated from terrorists,” Igor Kirillov, the commander of Russia’s Nuclear, Biological and Chemical Protection Forces, said at a press conference in Moscow on Wednesday.

The commander also criticized the international bodies for their refusal to cooperate with the Syrian government to launch an investigation into the alleged chemical attacks across the country.

Late last month, the Russian Reconciliation Center in Syria said it had obtained information that militants in the Damascus suburb of Eastern Ghouta had been “preparing a provocation with the use of poisonous substances in order to blame the government forces of using chemical weapons against civilians.”

The disclosure of the information “has foiled the plans of the US-led coalition to strike key Syrian military targets in order to change the balance of power in favor of the so-called ‘moderate opposition,’” Kirillov pointed out.

Also on Wednesday, UN Secretary-General Antonio Guterres expressed concern over allegations of chemical attacks in Syria and called on the Security Council to adopt measures to address “such serious crimes.”

Guterres made the remarks a day after he met the head of the Organization for the Prohibition of Chemical Weapons (OPCW), which has probed over 70 alleged cases of toxic gas attacks in Syria since 2014.

While the use of chemical weapons is “unjustifiable and abhorrent,” “equally unjustifiable is a lack of response to such use,” a UN statement said.

OPCW chief Ahmet Uzumcu said there have been “several” recent allegations of chemical weapons use in Eastern Ghouta, noting that the experts are investigating the allegations of chlorine use blamed on both sides of the conflict.

The OPCW’s fact-finding mission for Syria was formed in April 2014 to determine whether toxic agents were used as a weapon, but the body is not authorized to say which side is responsible for its use.

In 2015, the UN Security Council formed a panel, known as the Joint Investigative Mechanism (JIM),  tasked with finding the perpetrator of the attack, but that the investigation stopped in 2017 after Russia vetoed the extension of its mandate.

Russia slammed the JIM as biased and unprofessional after it concluded in a report that Syrian forces had used sarin in an attack on the town of Khan Shaykhun in Syria’s northwestern militant-held province of Idlib in April 2017 that killed over 80 people.

Instead, Russia presented a draft resolution to the council, demanding formation of a new panel. However, the US, Britain and France have rejected the bid, the proposal undermined the previous investigation.

The US later circulated another rival draft resolution, which Russia dismissed as an aeffort to revive the already fruitless JIM.

As a result, several rounds of negotiations at the UN have so far failed to achieve any progress.

The Syrian government surrendered its stockpiles of chemical weapons in 2014 to a joint mission led by the UN and the OPCW, which oversaw the destruction of the weaponry.

Western governments and their allies, however, have never stopped pointing the finger at Damascus whenever an alleged chemical attack is reported.

The Russian Defense Ministry had earlier warned that militant groups in Eastern Ghouta were preparing a false flag attack in a bid to blame the Damascus government for using chemical weapons against civilians.