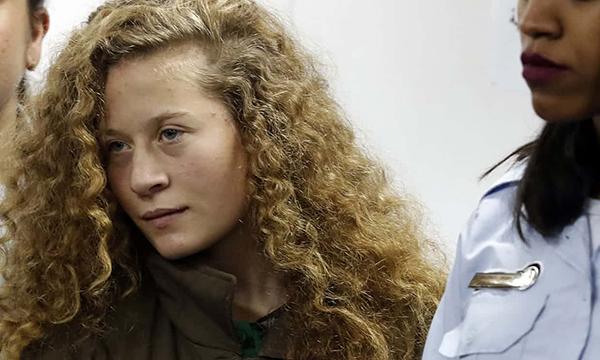 A 17-year-old Palestinian girl who was filmed slapping and kicking two Israeli soldiers outside her home has accepted a plea deal under which she will serve eight months in prison, her lawyer has said.

Under the deal, offered by the military prosecution on Wednesday, Ahed Tamimi is expected to plead guilty to four charges, including assault, incitement and two counts of obstructing soldiers.

Tamimi’s lawyer, Gaby Lasky, said the sentence would include four months already served and a fine of 5,000 shekels (£1,017).

The deal was made during a closed-door hearing but must still be approved by the military court, she added.

Tamimi, who was arrested in the middle of the night and since denied bail, potentially faced years in prison for 12 charges including assaulting security forces and throwing stones.

A high-profile trial with images showing Tamimi smiling while in shackles has thrown the teenager into the centre of a debate regarding Israel’s occupation of the West Bank.

Tamimi’s supporters hailed her as an icon of Palestinian resistance; rights groups said she posed no apparent threat and argue her case epitomises the brutality borne from half a decade of Israeli army rule.

Tamimi’s village, Nabi Saleh, has been a focus of anti-occupation protests for years.

In Israel, many have praised the restraint of the two soldiers and accused her family of using their daughter as a pawn in filmed provocations. Others called for a harsh punishment as they said the incident made the military look weak. A video has been shared online of Tamimi praising “martyrdom operations”.

“She is not a little girl, she is a terrorist,” culture minister Miri Regev has said. “It’s about time they understood that people like her have to be in jail and not be allowed to incite racism and subversion against the state of Israel.”

Following close international scrutiny, the judge ordered closed-door hearings last month. A military appeals court later rejected a request by Tamimi to hold the proceedings in open court, despite the prosecution stating they had no objection.

The Tamimis have a long history of both peaceful and violent resistance. The prosecution said Ahed hit the soldiers shortly after hearing Israeli troops had severely wounded her 15-year-old cousin, who was shot in the head with a rubber bullet during a stone-throwing clash.

Tamimi’s mother, Nariman, and a cousin were also arrested for the same incident. Lasky said Nariman was also seeking an eight-month plea bargain.

An anti-occupation Israeli NGO said this week that Palestinian minors suffer a “systematic violation” of their rights under the Israeli military juvenile court system.

B’Tselem said young suspects are frequently advised to plead guilty in exchange for a reduced prison sentence as the conviction rate was so high.