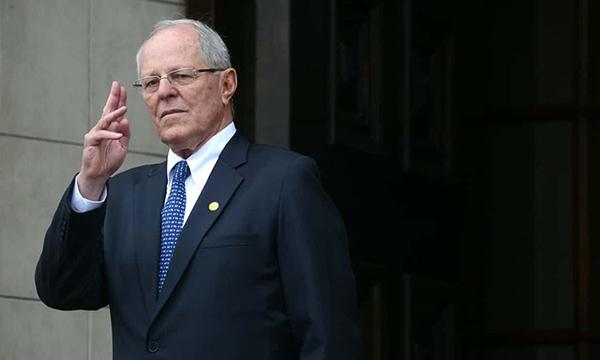 Peru’s president Pedro Pablo Kuczynski has offered his resignation after secret video recordings entangled him in a new corruption scandal on the eve of an impeachment vote, plunging one of Latin America’s steadiest economies into a political crisis.

It was unclear if the opposition-controlled Congress would accept his resignation or proceed with a vote on Thursday to force him from office.

In a televised message to the nation Kuczynski said he would offer his resignation to avoid being an “obstacle” to the country but continued to deny any wrongdoing.

Just 19 months into his five-year mandate Kuczynski is the first sitting president in Latin America to be forced out due to links to the Brazilian construction giant Odebrecht, which has been at the centre of continent’s biggest corruption scandal.

Kuczynski resigned as lawmakers prepared to vote for the second time in three months whether to oust the 79-year-old leader from office for “permanent moral unfitness” in a plenary session of Congress. He is accused of repeatedly lying about decade-old business ties to the Brazilian firm.

But the release on Tuesday night of secretly-recorded videos allegedly showing the president’s supporters attempting to buy political support ended any possibility that Kuczysnki could survive the attempt to force him out.

The videos released by Peru’s biggest opposition party Fuerza Popular allegedly show key allies of the president offering lawmakers a share of public work projects in return for help in defeating a second impeachment vote against Kuczynski. He narrowly survived a previous impeachment motion in December 2017 .

The video clips shown in a news conference feature a government official explaining to a lawmaker how to make easy money from government projects for his region, while congressman Kenji Fujimori, assures him of government protection.

In his address on Wednesday, Kuczynski blamed “selectively tendentious” edited recording for giving the impression of vote buying and said “political confrontation had created a climate of ungovernability” which did enormous damage to the country.

Government ministers have denied contracts were awarded in exchange for political support and announced they would fire the official. Kenji Fujimori also denied wrongdoing, saying the recordings were a reflection of typical negotiations to get infrastructure projects off the ground.

Although Kuczynski, known as PPK, was not directly implicated in the alleged vote buying, his increasingly battered credibility could not survive a further scandal.

The Oxford and Princeton-educated former banker who promised to modernise Peru is the first victim of a unfolding corruption scandal which has implicated most of the country’s main political players.

“The parliamentary majority worked against PPK from day one,” said Eduardo Dargent, a political scientist at Lima’s Catholic University.

“But he too must take responsibility for his downfall. His business interests, his lack of transparency, his lack of political manouevring to distance himself from the Odebrecht scandal.

“In many ways, he dug his own grave.”