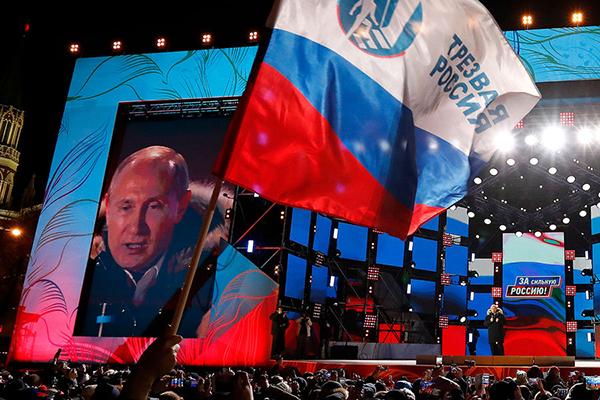 The West and Russia are once again at ideological loggerheads, this time between authoritarianism and democracy. But as Putin advances and provokes, Western pushback is mostly verbal, avoiding measures that would be costly to both sides. And he knows it.

His response was as provocative and disdainful as the over-all stance the Russian leader has increasingly taken toward the United States and the West in recent years.

That answer, as shocking as it was, echoed the schoolyard taunting that Putin has employed with Western leaders at least since he seized the Crimean Peninsula in early 2014.

Now coming off a reelection Sunday that assures him another six years in power, the Russian president can be expected to pursue – and perhaps even accelerate – such “what-are-you-going-to-do-about-it” provocations.

His actions, and his utterances, have tied the West in knots but have elevated him at home while spotlighting his autocratic style of rule for admiring despots around the world, experts in Russia-West relations say.

For some, Putin’s consolidation of power and other recent events – including, allegedly, the poisoning with a banned Soviet-era nerve agent of a former Russian spy and his daughter in Salisbury, England – portend a new cold war, to the extent that the first cold war was a battle between two worldview ideologies.

Yet for others, the years ahead promise to look more like an inversion of the post-cold war years, when democracy and the Western-built and West-led international order triumphed and expanded. This time around, it’s Putin’s Russia that is on a roll, and, with his help, authoritarian governance and strongman international tactics that are on the march.

“Yes, democracy and the liberal world order seemed to triumph after the cold war, but then we in the West took that victory for granted and got lethargic,” says Henri Barkey, a professor of international relations at Lehigh University in Bethlehem, Pa.

In his view, the United States and the West failed to defend the high ground with a coordinated effort to sustain democracy’s gains and expanding adherence to the rule of law. Moreover, the Iraq War, the global financial crisis, a botched response to the Arab Spring, and other missteps soured much of the world on the Western example and cleared the way for an alternative.

“All that created a vacuum,” Dr. Barkey says, “and when you create a vacuum the bad guys are going to act to fill it. What Putin and [Turkish President Recep Tayyip] Erdoğan and the rest are reminding us now,” he adds, “is that if you don’t push back, they will take advantage of you.”

In the wake of the Salisbury poisoning and with Putin’s reelection victory, many Russia experts are singing a similar tune – that it is going to take substantially more pushback to alter Putin’s behavior. But if the recent past is prologue, they add, the Russian leader has little reason to fear any meaningful steps to curb his actions.

“Nothing about Putin’s behavior is going to change, so in fact relations [between the West and Russia] may very well get worse,” says Nikolas Gvosdev, a professor of national security affairs and Russia expert at the US Naval War College in Newport, R.I. “His aim has been to divide and weaken Western allies and to enhance what he sees as Russia’s rightful place in the world, and he’s going to keep doing that until he runs into costs he’s not willing to pay.”

But the Western response so far to the Salisbury poisoning – the first use of a military-grade nerve agent on European soil since World War II, European officials underscore – has been relatively tame, analysts say.

British Prime Minister Teresa May last week ordered the expulsion of 23 Russian diplomats while suspending high-level government-to-government contacts, and Western allies including the US issued a condemnatory statement. But experts say there is much more both Britain and its allies could do – largely on the order of meaningful financial punishments and oil and gas import restrictions – if they really wanted to get tough.

Moreover, some Western officials and US congressional leaders expressed dismay Tuesday when President Trump broke the deafening silence of Western leaders and placed a congratulatory phone call to Putin on his election victory.

“An American president does not lead the Free World by congratulating dictators on winning sham elections,” Sen. John McCain (R) of Arizona said in a statement Tuesday. “By doing so with Vladimir Putin,” he said, “President Trump insulted every Russian citizen who was denied the right to vote in a free and fair election [and] the countless Russian patriots who have risked so much to protest and resist Putin’s regime.”

In congratulating Putin – and boasting about it to White House reporters even though his national security advisers had warned him (in capital letters) not to laud the Russian leader’s electoral triumph – Mr. Trump joined a list including leaders from Belarus, Azerbaijan, Cuba, and Venezuela, but pointedly missing those from any of America’s European allies.

Indeed many analysts, including both Dr. Gvosdev and Barkey, were already discounting the likelihood that Trump would take the helm of a coordinated Western counter-offensive against Putin, given the US president’s stated admiration for the Russian leader.

Still, many analysts emphasize that Western appeasement of Putin did not start with Trump.

Barkey, a former State Department Middle East policy planning official, says it was really former President Barack Obama who encouraged Putin’s adventurism by demonstrating to the Russian leader that he was not going to face much pushback from a US-led West.

“Obama came in with the potential to restore a weakened [Western] model and lead it in opposition to a rising autocratic tide, but he basically walked away from that role,” Barkey says. “Putin seized the opportunity” in Syria and eastern Europe, “and now sees there is little standing in his way.”

And in fact there are meaningful things the West could do to get Putin’s attention, analysts say, from levying meaningful sanctions on Russia over its interference in US and European elections and standing up forcefully to Putin in Syria, to turning to other providers for oil and gas. The West’s sanctions for the incursion into Ukraine also could be toughened.

But so far pushing back against Putin has remained largely on a rhetorical level – the Western leaders’ joint statement after the Salisbury poisoning the most recent example – and largely devoid of coordination, analysts say.

US officials talk of punishing Putin over his provocations, but the talk so far has had little follow-through.

Trump could, for example, push the Saudis to ditch an agreement with Putin to reduce oil sales to keep oil above $60 a barrel, some experts note. But both Trump and the Saudis seem to be more interested in working to counter Iran’s rise than to bother Russia, those experts add.

“I think the Russians can be forgiven for thinking that the US and the rest of the West will only go so far [with pushback] because they see that no one wants to do anything that will entail costs for them as well as for Russia,” says Gvosdev.

The Salisbury poisoning is only the most recent case in point. Russian officials including Putin have denied any role in the act, saying it would make no sense for the Russian government to do such a thing on the eve of a presidential election and with Russia’s hosting of the World Cup coming up.

But on the contrary, some Russia analysts say, the in-your-face action has Putin’s signature all over it: It says “I can do this on your soil because I’m strong and you are weak, especially vulnerable going through a divorce from the European Union as you are,” they say.

A need to deliver at home

Prime Minister May could order measures targeting Russian money in the London financial market, for example, but is she willing to take such a costly step at such a delicate moment? Putin seems to be daring her to.

Yet while the short term may pose few roadblocks for Putin’s forward march, some analysts say the Russian leader faces a different long-term horizon – one the West should be able to exploit to its own ends.

Gvosdev says that a realistic Putin may soon see the need to draw Russia’s intervention in Syria to a close and to remove the irritants – Ukraine being one – threatening Russian oil and gas sales in Europe.

Others say that with six more years in the Kremlin, Putin is going to be increasingly constrained by the need to deliver at home. “It will be difficult for Putin to continue the way he is, living off this image of the restorer of Russia to its place as a power to be reckoned with,” says Barkey. “People want to live better, and how are you going to do that with foreign interventions and when all you have to sell is oil and arms?”