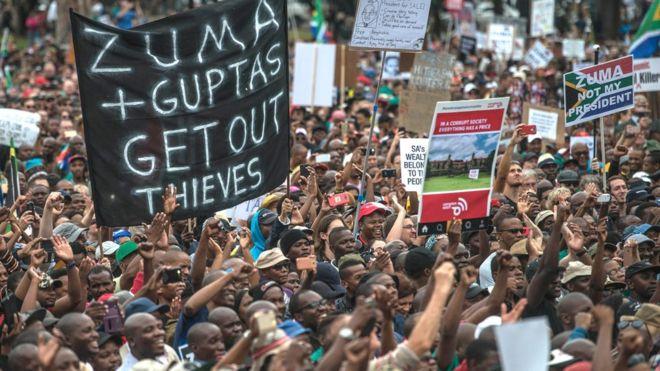 It sounds more like a fable than a news story…

An ambitious family arrived from a distant land, wormed its way into the heart of a young democracy, became unimaginably rich and influential, stood accused of trying to hijack the state itself, and then, overnight, vanished into thin air, leaving those who had fallen under the family’s spell – and those who had warned against it from the start – to wonder how anyone could have got away with so much, for so long.

Today, South Africans – by turns stunned, humiliated, and vindicated – are still trying to digest the impact of the Guptas, and to assess what harm they have done to the country’s institutions, politicians, and democracy.

“I think the damage can be reversed,” said the political analyst Prince Mashele – but only if the authorities here move fast, and aggressively, against those who allegedly conspired with the Indian-born family.

“Society must see people going to jail. Once you do that, you’re sending a message that if you do what… the Guptas did, there will be consequences.”

It was last month that the South African police’s elite Hawks unit shocked the nation by arriving at the Guptas’ lavish compound in Johannesburg before dawn, looking to make arrests.

For years the family had seemed untouchable, repeatedly implicated in corruption by state officials, email leaks, and senior politicians, but apparently protected by their close friendship with President Jacob Zuma.

The Gupta brothers were accused of vetting ministerial appointments and of using their influence to siphon money from state contracts. They hired the president’s son, Duduzane, to work for them, and repeatedly denied any wrongdoing.

But everything changed on that dramatic day, 14 February. Within hours of the police raid, President Zuma had announced his resignation, and the three Gupta brothers were found to have vanished abroad.

“I think they will only return if they’re extradited,” said the legal campaigner Mark Haywood, whose Section 27 organisation had been among many groups pushing the South African authorities for years to confront the Guptas.

“It’s a victory… We mobilised on (so many) fronts to expose what was going on. We eventually made it untenable for this sort of ‘capture’ of the state to continue. We forced the authorities to do what they should have done right from the beginning.”

Today, South Africa’s law enforcement agencies are keeping quiet about their plans. The Gupta brothers are widely thought to be in Dubai, where they reportedly own a house.

The oldest Gupta brother, Ajay, is officially a “fugitive from justice”, but the police here will not discuss any extradition plans, or say which other family members they may be targeting, or on what grounds.

In the meantime, the Guptas’ business empire appears to be crumbling fast in South Africa. A coal mine, a television station, a luxury jet, a friendly bank, a dairy farm, and half a dozen other Gupta-linked companies are either closing down, changing hands, or being targeted for seizure by the authorities.

At the same time, an increasingly uncomfortable spotlight is being shone on prominent politicians who, it is alleged, either partnered the Guptas, or turned a blind eye to their alleged misdeeds.

Senior figures have already been removed from the board of the badly compromised state energy company, and the controversial head of the country’s revenue collection service, SARS, has just been suspended.

“I’ve no doubt this new chapter… means that those Zuma and Gupta-linked crony networks are going to be very quickly, and effectively uprooted,” said the Democratic Alliance’s shadow police minister Zakhele Mbhele, who nonetheless warned that other corrupt patronage networks would continue to thrive at a provincial and regional level within the structures of the governing ANC.

Mr Zuma, now an ordinary citizen, is facing separate legal troubles as a much older corruption scandal – involving alleged bribery by a French arms company – comes back to haunt him. But a judicial inquiry into “state capture” – allegedly involving the Guptas and Mr Zuma – is also likely to begin soon. The former president’s retirement seems likely to be busy, and eventful.

As gloomy as many South Africans are about the damage the “Zuptas” have done to their young institutions, there is also a mood of relief here, and, for some, a belief that the Guptas have, unwittingly, played a useful role.

“If you told South Africans that this could happen, we’d say ‘no!’ But the Guptas… proved that it is possible – that you could come in from outside and capture an entire democratic state and control it. It means we are now much more careful as a society. So they have actually woken us up,” said Prince Mashele.