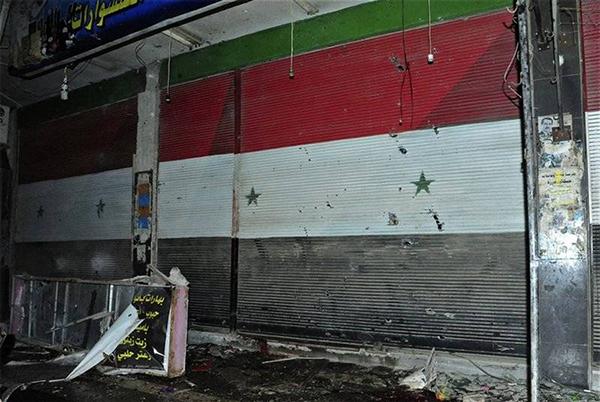 Eastern Ghouta was one of the hubs of the civil uprising against Assad’s government in 2011, which was to be eclipsed by a violent crackdown by the security services and subsequent armed revolt.

BEIRUT: Hundreds of armed rebels and civilians will begin evacuating a besieged town in eastern Ghouta, a rebel spokesman and Syrian government media reported Wednesday, in the first instance of fighters leaving the opposition stronghold east of the capital following a deal reached with the government.

Monther Fares, a spokesman for the powerful Ahrar al-Sham group, said the deal involves the departure starting Thursday morning of opposition fighters from his group to northern Syria. He said the deal negotiated with the government gives security guarantees for those who decide to stay in the town after the government takes over.

The Syria-controlled Military Media Center said 1,500 armed rebels and 6,000 civilians will evacuate Harasta on Thursday to the northern province of Idlib as part of a negotiated deal. The Ahrar al-Sham group, headquartered in Harasta, is the smallest of the rebel groups that control eastern Ghouta.

It is the first such deal involving the evacuation of opposition fighters from eastern Ghouta, which has been under a ferocious government air and ground assault for a month.

Fares said rebels have agreed to leave because of “civilian pressure” resulting from intensive airstrikes and “warplanes that do not leave the sky,” adding that residents of Harasta have spent the last three months inside shelters. He said Russia, a military backer of President Bashar Assad, was the guarantor of the deal.

In other parts of Syria, government forces have also pressed the rebels to enter into local cease-fire agreements under which the militants and their families would relocate to other parts of the country. The Syrian opposition has criticized such agreements, saying they reward the government’s siege tactics and legitimize the forced displacement of civilians from their homes.

Syrian government forces have chipped away at the sprawling rebel enclave of eastern Ghouta, seizing more than 70 percent of the territory since Feb. 18. The assault has displaced 45,000 people, according to the United Nations. Before the latest offensive, it was estimated that 400,000 people were trapped in the besieged region.

Eastern Ghouta was one of the hubs of the civil uprising against Assad’s government in 2011, which was to be eclipsed by a violent crackdown by the security services and subsequent armed revolt.

Rebels have hit back with rockets and mortar shells on the capital Damascus.

In one of the deadliest attacks in the Syrian capital in the country’s seven-year civil war, at least 44 people, most of them women and children, were killed when insurgents fired mortar shells at a busy market in Damascus on Tuesday evening, state media said Wednesday.

In another bloody scene, an airstrike killed 21 people — 16 of them children — in the rebel-held province of Idlib in northwestern Syria, an activist said Wednesday. The children, between 7 and 10 years old, were leaving their schools in Kfar Bateekh village when jets began flying overhead.

Raghda Ghanoum, an activist near Kfar Bateekh, said the children and four adults took cover in a cave nearby, where the airstrikes hit. Ghanoum said she documented 21 victim names, including 16 children.

The violence in both government-held and opposition-held areas came as Syrians celebrated Mother’s Day, turning the occasion that ushers the spring season into a blood-spattered day for families on both sides of the conflict.

The Britain-based Syrian Observatory for Human Rights said 20 were killed in the airstrikes on the village.

The Observatory put the death toll in the market shelling in Damascus at 43, including 11 pro-government fighters. Video of the aftermath posted online showed scenes of chaos, with people screaming and bodies and store mannequins strewn across the ground.

Hospital Director Mohammed Haitham al-Husseini told Al-Ikhbariya TV that 35 others were wounded in the mortar attack, with six in intensive care. He said most of the casualties were women and children.

Witnesses told state-run TV that the mortar shells fell during rush hour in the popular market on the eve of Mother’s Day, celebrated in the Middle East with the start of spring. A child said he was out shopping with his family for Mother’s Day when they heard a huge explosion. “Everyone started running, and people were going into narrow streets to give first aid to others,” the child said.

A woman speaking in the hospital said her niece, who was wounded by shrapnel, lost her four-year old son. “We just saw him in the morgue,” the woman told Al-Ikhbariya. The TV network did not identify the woman or the child.

The government blamed the attack on rebels in eastern Ghouta.

Government forces, meanwhile, continued to pound remaining opposition-held areas with shelling and airstrikes. The first-responders group known as the White Helmets said 56 civilians were killed Tuesday in Douma, the largest town in eastern Ghouta, updating an earlier toll. Video from the White Helmets showed rescue workers surrounded by fire and ongoing shelling struggling to retrieve survivors from a building in Douma.

The Syrian Civil Defense said that since the latest offensive started a month ago, it documented 1,252 civilians killed in more than 2,990 airstrikes and hundreds of other shellings.

Government forces have made major gains in recent days, leaving just a small fraction of eastern Ghouta under rebel control. Assad paid a rare visit to troops on the front lines over the weekend.

Syrian and Russian forces have opened a third corridor in eastern Ghouta to allow civilians to leave Harasta, which is home to an estimated 20,000 people. Russia’s Maj. Gen. Vladimir Zolotukhin said 300 civilians and 15 militants have exited through the corridor in the past 24 hours. He said the number of civilians fleeing rebel-held areas has been declining after tens of thousands left in recent days.