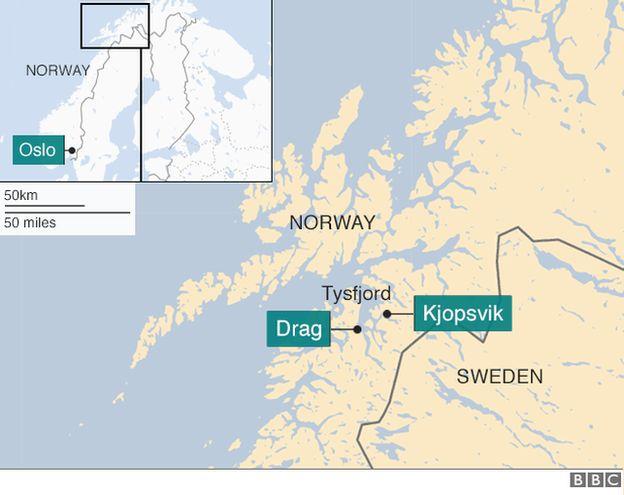 Norwegian police have documented 151 cases of sexual abuse, including child rape, in one small community of 2,000 people, north of the Arctic circle. The offences occurred over decades – between the 1950s and 2017 – but were only recently uncovered. How could such serious sex crimes go unchecked for so long?

Nina Iversen says she has always been someone who talks – and has often talked about what happened to her when she was growing up in Tysfjord.

When she was growing up, young people confided in each other about the sexual abuse they had experienced, but adults would not listen.

“We were called whores and liars. There were many of us who were treated like that. And we were spat on if we tried to talk about it,” she remembers.

Iversen’s abusers were her relatives, so as a child she lived family life in a perpetual state of terror.

Now 49, she no longer lives in Tysfjord, but says she still doesn’t feel safe.

A remote community dominated by a 900m-deep fjord, Tysfjord is split in two – one part, Drag, lies on the western shore, and the other, Kjopsvik, on the eastern. A car ferry ploughs its way back and forth between the two.

About half of those living here are from the indigenous Sami community – Scandinavia’s original inhabitants, who live in Norway, Sweden, Finland and Russia. But Sami people accounted for about two-thirds of the 83 victims and 92 perpetrators identified in the police report on sexual abuse, and discrimination and racism had an impact on how the story played out.

By 2005, Nina Iversen was a mother. Worried about her children, and the threat to them of sexual abuse, she was in touch with child welfare services. Again she spoke about her own experiences. She told her doctor.

“I told everyone,” she says. “But to be listened to, you had to have the right background. Someone like me, who comes from a poor family, just got ignored.”

Iversen was not the only one trying to get the authorities’ attention. In 2007, desperate Sami parents of a child who had been sexually abused wrote a letter to the prime minister asking for help. The letter gained traction in the media – people expected action.

At that time, Anna Kuoljok, a deacon in the Norwegian Church, and her husband Ingar, a lawyer – both of them Sami – were in touch with 20 families whose children had been sexually exploited. The couple spoke up at public meetings attended by local politicians, health workers, the police and other authorities.

Image caption Anna and Ingar Kuoljok, outside the Sami hut used as a church

“They thought it couldn’t be true there were so many cases – that’s what they said to us,” remembers Anna. “They thought we were lying.”

“They were just not comfortable with these kinds of stories,” says Ingar. “They didn’t know how to handle it.”

When people experienced that they were listened to, they started talking – and then six decades of stories came out at one timeLars Magne Andreassen, Sami community centre

The Mayor of Tysfjord, Tor Asgeir Johansen, remembers those meetings too but has a different explanation for what went wrong.

“They didn’t get a grip on things because people wouldn’t tell,” he says, referring to the victims of sexual abuse. “The community isn’t the police – we can’t go around looking in people’s homes. People must come and ask for help.”

Reporting sexual abuse is difficult for many victims, regardless of their cultural heritage. But in Tysfjord there was a further reluctance to speak out – in many cases the Sami people did not trust the police or authorities.

At the same time, Nina Iversen – and she was not alone – was trying to tell her story, but was not listened to.

Ethnic divisions were compounded by geography and politics – the more Sami-identifying village of Drag in the west, separated from the more Norwegian village of Kjopsvik in the east, where most authorities were based.

Nearly another decade would pass before the abuse story broke in the press. Those years were difficult and lonely for Nina Iversen. She was depressed, and posted a poem about sexual abuse on Facebook, writing ‘TYSFJORD’ in angry block capitals.

Another local woman with experiences similar to Iversen’s saw it and got in touch. She said she was already talking to two freelance journalists. And then the ball started rolling. Nina contacted other victims she knew, including women in her extended family. On 11 June 2016 a national newspaper, Verdens Gang, published the story of sexual abuse in Tysfjord based on the testimony of 11 survivors – women and men.

The reaction was immediate. Tone Vangen, Nordland Police District’s chief, was relaxing at home that Saturday. She abandoned her weekend from the moment she read the press report.

“This was really serious. We had to put it at the top of our priority list – the main aim was to prevent further cases of sexual abuse in Tysfjord. The following Monday we started to build the organisation that could start the investigation.”

Vangen asked everyone who had experienced sexual abuse, however long ago, to come forward.

“We said – even if the Statute of Limitations on offences means we can’t take the case to court, we want to take you seriously and we want to understand this problem. But we just didn’t realise how big it was.”

Police officer Aslak Finvik was tasked with making contact with Sami people and creating trust so they would talk.

“It was complicated,” he says. “There were many things the police didn’t know about before – family ties, religion. And in Sami culture there are elements from pre-Christian times. People believe in healing, and that a shaman can get power over someone by reading their pain. They felt ashamed to talk about it because from a Norwegian point of view, we can’t understand it. But it was very important for Sami people that we did.”

That understanding would result in the first prosecution in the Tysfjord case – a man who gained access to women by claiming the power to heal and to drive away evil spirits, who sexually assaulted his victims during “treatment” sessions. He was sentenced to five-and-a-half years in prison.

The Sami in Norway

By 2016, Nina Iversen’s abusers were dead, so she would never see justice done in court.

But she was very happy to collaborate with the police. Meanwhile, in the weeks after VG published its story, about 40 victims sought help from the local doctor, Fred Andersen. The youngest was 10, the oldest 80.

“We had to give them huge medical and psychiatric support,” he says. “It’s been a very heavy burden. The young people will survive and come out of this with new strengths and self-respect. But the elderly, and those of 50 or 60 who are unemployed with psychiatric problems, they suffer.”

Inevitably, questions have been asked about why it is Sami people who feature so largely in this story of abuse. But Lars Magne Andreassen, director of Arran – the Sami community centre in Drag – resists a cultural explanation.

“We have to be self-critical, of course we do. But that doesn’t mean that we as a people are to blame. We can compare what happened here in Tysfjord to the #MeToo movement. Why did the most powerful women in the world shut up? Should we blame them? Of course not. There were good reasons for not speaking out – they feared something,” he says.

“It’s exactly the same thing going on here. When people experienced that they were listened to, they started talking, and then six decades of stories came out at one time.”

More than 1,000 people – victims, witnesses and perpetrators – were interviewed by the police in the course of their investigation. But of the 151 documented cases in Tysfjord, only a handful will go to court because in most cases the time-limit for prosecution has elapsed. This means many alleged sex abusers still live in this small, close-knit community.

Not long ago, Nina Iversen was thinking about moving back to Tysfjord. One afternoon she went and had a look around Kjopsvik. But while she was there she saw three people who had been accused of abuse close to the primary school gates.

“There were children walking home from school while these people were roaming around. It was just awful,” she says.

It is police officer Aslak Finvik’s job to monitor these men – and a few women.

“Every one of them we have talked to – Sami and Norwegian – and told them what we know about them. We’ve told them not to make contact with the victims. If they do, we may prosecute them,” he says.

In Tysfjord, it seems everyone knows someone affected by this story – a survivor, a perpetrator. Sometimes perpetrators are themselves survivors.

In her role as deacon in the Norwegian Church, Anna Kuoljok organises meetings in a small church built in the style of a traditional Sami hut in Drag.

“We talk about feelings and how to handle them. There is so much grief and anger,” she says.

But rejecting the perpetrators is not an option. Sami culture is inclusive, and belief based on a circle of life that embraces God, people, animals and nature.

“So we must find a way to live together, because everybody is in this circle of life,” she says.

When the police report was published in November 2017, police chief Tone Vangen apologised to the people of Tysfjord.

“The job the police did until June 2016 was not good enough,” she says. “This crime affected a lot of people for a long time.”

Slowly, trust is being nurtured in Tysfjord. Child protection training is in place, and Norway’s national government is funding projects to promote cohesion and build resilience. Community events are better attended now by both Sami people and Norwegians – a concert celebrating Sami music and culture was attended by 700 people earlier this month.

The mayor detects another change too.

“Generally, people are much nicer to each other – they take care of each other more than before,” he says.

The revelations have taken a huge toll on a vulnerable community. They have left in their wake fractured families, broken lives and at least two suicides. Nina Iversen’s experience has been entangled with that bleak history for decades, but as one of the first 11 survivors who told their story, she feels as though life is finally moving in the right direction.

“Today I can say I’m proud of what we did. Now they’re listening. We’re getting somewhere – people believe us.”