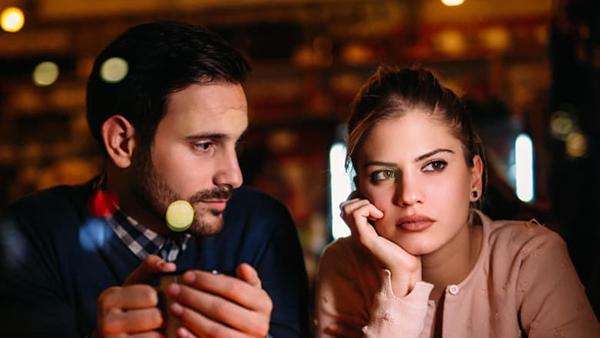 Recently, I was chatting to a man on a dating site, and it went a little bit like this:
Me: Asked a question about him.
Man: Answered.
Me: Asked another question about him.
Man: Answered.
(Repeat for a while.)
Then…
Man: So you say in your profile you’re a writer?
Me: Yes!
(FINALLY, I think. He’s going to ask something about me!)
Man: I wrote a short story! Here. Let me send it to you.

This experience was not unusual. I mean, sure, not every man sends me his unsolicited manuscript (though you’d be surprised how many do) but it is extremely common for men to chat endlessly about themselves and ask nothing at all of me.

And it isn’t just in messages; it’s on actual dates. I will frequently come away from a first date with a man knowing quite a bit about him – how he feels about work, his kids’ names and ages, what he likes doing in his spare time – and he will know nothing about me.

It’s not because I’m the shy and retiring type. It is simply because he doesn’t ask.

Honestly, if I had a dollar for the number of times I’ve come away from a conversation with a man having been asked nothing about myself, do you know how much money I’d have?

Of course, the failure of men to ask questions of women is not limited to dating. When I was married and attending dinner parties with my then husband and his colleagues, I would often be seated next to a man who spoke incessantly about himself. And I’d play along, being the dutiful wife, expressing interest in the dude’s work and family and travel, without him showing the slightest bit of interest in me. Then we’d leave, and I’d explode in the car, frustrated at being invisible and unheard.

Dating, however, is predicated on both people being interested in getting to know each other better, at least for an hour or so. And you can’t get to know another person if you don’t ask any questions. You can enjoy their reactions to your stories, and relish the attention, but you can’t generate a real connection.

Now, if you’re a man, hold off on the emails informing me that you are different, and you ask a lot of questions. Of course, you are. It’s #notallmen. But it’s common, and my experience is certainly not unique. Many single women of my acquaintance report the same thing, and the issue shows up frequently in dating forums: Why doesn’t he ask me any questions?

Interestingly, many men who show no interest in their dates will still ask to see them again, so it doesn’t necessarily boil down to a lack of attraction. But it’s a superficial attraction; it’s an attraction to the other person as a sounding board for their own ideas and stories.

And really, it doesn’t feel very good to be reduced to a sounding board. I’m curious about other people, and I enjoy asking questions, but I also want to be seen and heard. I have left dates – even second or subsequent dates – feeling superfluous, a bit player in the scene, easily replaced by any other anonymous woman, or the barman, or even a passerby.

We can speculate all we want on the differences between male and female patterns of communication, how women use language to connect, and men use language to impress. We can prompt men to ask their own questions. (“Is there anything you want to know about me?” I often ask.)

Ultimately, it boils down to curiosity. If you are genuinely interested in another person, then you will be curious about who they are and what makes them tick. And if you’re not curious, then you’re not interested in them in a meaningful way, though you may be happy to take them home for a night or a few.

As for the man on the dating site, he got back to me a few minutes later.

So what did you think of my story? he asked.

Hey, at least it was another question.

I love being a mogul: The Hollywood stars going into business