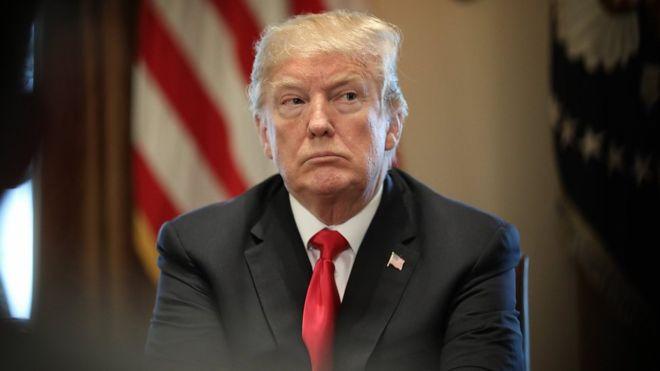 The Trump administration plans to announce sanctions against China on Thursday after determining that the country is encouraging the theft and transfer of intellectual property from US businesses.

The White House said the actions come after years of talks about the issue that failed to produce change.

The actions are expected to include tariffs, as well as other measures.

The plans have stoked fears of a wider trade war.

The White House is reported by US media to be considering between $30bn-$60bn in tariffs as well as measures that would restrict investment.

The US may also seek to bring complaints to the World Trade Organisation, trade officials said.

America’s top trade negotiator, Robert Lighthizer, told members of Congress on Wednesday the US is looking to put “maximum pressure on China and minimum pressure on US consumers”.

Mr Lighthizer said protecting intellectual property is critical to the US economy.

“It’s an enormously important issue,” Mr Lighthizer said at the House Ways and Means hearing. “We think it is perhaps the most important thing that will have been done in terms of rebalancing trade.”

What is behind the tariffs?

A US trade official, who spoke to reporters as part of a briefing, said the US has evidence that China requires firms to create local partnerships to enter the Chinese market, as a way of pressuring them into technology transfer.

The US also found evidence that China steers investments in the US to strategic industries, and conducts and supports cyber attacks.

The findings come from a review of China’s practices that Mr Trump ordered in August, called a 301 investigation.

In section 301 of the trade act, the government has given itself the power to unilaterally impose sanctions against countries which it decides are not trading fairly.

Mr Trump has repeatedly railed against the massive US trade deficit with China.

Does the move have wider support in the US?

There is growing concern in America that China is seeking technology that could be deployed for military purposes.

Congress is also weighing legislation that would boost the government’s power to review foreign business deals, citing the threat posed by state-backed acquisition of US firms.

But some politicians and industries, including retailers, have expressed concern about possible retaliation.

“I’m all for targeting Chinese intellectual property violations, holding them accountable – but let’s be targeted in what we want China to change,” Erik Paulsen, a Republican who represents Minnesota, urged Mr Lighthizer on Wednesday.

“Let’s not shoot ourselves in the foot.”

Mr Lighthizer acknowledged the possibility of retaliation, noting that US agriculture is especially vulnerable. But he said that should not stop the US from taking action.

“I don’t think it is a sufficient worry that therefore we’re not going to stand up for intellectual property but we’re trying to do everything in a measured and appropriate way,” he said at a congressional hearing on Wednesday.

“If there is retaliation, then the United States is going to have to take action to stick up for our farmers.”

What has China said?

China has said there would be no winner from any trade war.

On Tuesday, the last day of the annual sitting of the National People’s Congress, China’s Premier Le Keqiang said he hoped both sides could remain “calm”.

He also said he hoped the US would ease restrictions on exports of high-tech goods to China.