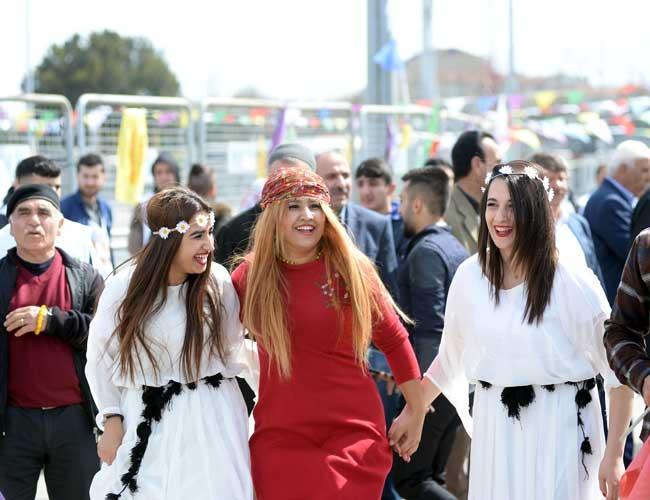 Thousands of people across Turkey celebrated the spring festival of Nevruz on March 21.

Nevruz traditions such as lighting a bonfire and jumping over it took place during the ceremony at the Topkapı Culture Park in the Fatih district.

Responding to reporters’ questions during the event, Şahin said he hopes Nevruz brings happiness and peace to Turkey. “This is a day when we are all together, we all rejoice together, and our unity as well as national unity and solidarity are tight,” he said.

Uysal also expressed similar wishes, saying: “With the coming of spring, brotherhood, peace, love, unity and solidarity comes to our Turkish geography. I celebrate all of our nation’s Nevruz.”

Meanwhile, another Nevruz event was held in the Istanbul district of Bakırköy’s Halk Pazarı Square, organized by the Peoples’ Democratic Party (HDP). Amid tight measures, thousands of people entered the area through two checkpoints set up by the police. Flags or posters that were seen as “objectionable” were not allowed in the area by the police, state-run Anadolu Agency has reported.

Several other similar events were planned in various cities across Turkey to mark the festival that signifies the joys of spring.

Nevruz means “new day” in Persian and marks the start of the new year for a number of peoples in Eurasia – from Azeris to Iranians to Kazakhs. It is also considered a key national day by Kurds across the region.

In the southeastern province of Diyarbakır, Nevruz celebrations were held by the HDP in a park named “Nevruz” in the Bağlar district.

Thousands of people gathered in the park amid tight security measures, as police set up five different checkpoints in the area. Some 7,000 police officers were said to be on duty in the area.

The celebrations, which kicked off with Kurdish songs and the “Halay” folk dance, saw the attendance of HDP co-chair Pervin Buldan, other HDP deputies, and Ahmet Türk, former mayor of the southeastern province of Mardin.  In the southeastern province of Hakkari, Nevruz celebrations were organized by the governor’s office and municipality in front of the Atatürk Culture Center in the city center. The event kicked off with a moment of silence, followed by the singing of the Turkish national anthem. Afterwards, Turkish and Kurdish folk songs specific to the region were performed.

Meanwhile, police in the western province of İzmir have detained 61 people in an operation ahead of the Nevruz celebrations, seizing 30 kilograms of skunk, 155 grams of powdered cannabis, four unlicensed guns, and various “organizational documents” belonging to the outlawed Kurdistan Workers Party (PKK), Anadolu Agency reported. The operation was conducted by 1,500 police officers, four detection dogs, and two helicopters.

Meanwhile, President Recep Tayyip Erdoğan released a message to mark the Nevruz festival, describing it as a “festival of new beginnings, hope, brotherhood, and solidarity.”

“I hope that Nevruz leads to our brotherhood connections and solidarity to get strengthened even more. I believe that during this sensitive period, during which our 1,000-year-old fellowship is wanted to be sacrificed to the fights of global interests, all of the individuals of our nation will celebrate Nevruz in line with its true intention and with peace,” he said.

Prime Minister Binali Yıldırım released a similar message marking the importance of 21 March International Nevruz Day, saying: “Nevruz, as was the case for centuries, is today also a symbol that reinforces peace and brotherhood… On this beautiful day, as a nation, we laud the universal language of love, peace, and brotherhood, and show that we stand against all kinds of violence and terror,” he said.

Main opposition Republican People’s Party (CHP) leader Kemal Kılıçdaroğlu has said in a message posted on his Twitter account: “With the Nevruz, which signifies the coming of spring, I wish for all of my citizens to live in unity, solidarity and friendship in a Turkey that is full of tranquility. I wish a happy Nevruz.”

Nationalist Movement Party (MHP) leader Devlet Bahçeli also on March 21 wrote a message on Twitter, saying the Nevruz festival is “the spring festival of the Turks. We should not give a chance to those who want make such a festival an instrument to treacherous aims.”

“Nevruz is Turkish, it is Turanic, it means excitement, an objective, and an assurance of Turkey’s brotherhood and solidarity,” he also said.

Refugees arriving in US unlikely to exceed cap set by Trump