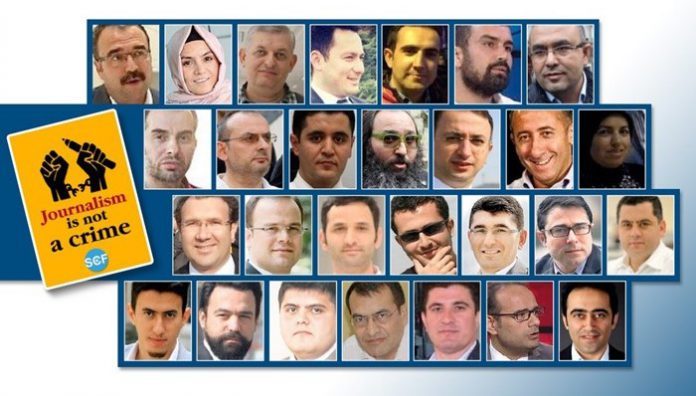 The Office of the United Nations High Commissioner for Human Rights (OHCHR) on Tuesday stated that it had received reports on the arrest and detention of approximately 300 journalists and the closure of 100,000 websites in Turkey in 2017, calling on the Turkish government to immediately release journalists, writers, judges and academics.

In a 28-page report issued on Tuesday, the OHCHR documented the crackdown on the Turkish media last year:

“OHCHR received reports on the arrest and detention of approximately 300 journalists on the alleged grounds that their publications contained apologist sentiments about terrorism or other similar ‘verbal act offences’, or for ‘membership’ of armed organizations. OHCHR documented cases of collective arrests of journalists, who remained unaware about the specific reasons for their arrests and continuing detention.

“For example, 11 journalists and staff of the newspaper Cumhuriyet were brought to trial in July 2017 on charges that included assisting a terrorist group. The charges stemmed from the publication by Cumhuriyet of information about the Government of Turkey allegedly supplying weapons to Islamist militants in the Syrian Arab Republic. The evidence produced by the authorities against the journalists consisted of public source materials such as newspaper clippings and social media posts, as well as the surveillance records of their journalistic work. While seven journalists were released on bail, chief executive Akın Atalay, Editor-in-chief Murat Sabuncu, investigative journalist Ahmet Şık, and accountant Emre İper, remained deprived of their liberty as of December 2017. The United Nations Working Group on arbitrary detention found their lengthy detention to be arbitrary and motivated by the Government’s effort to censor their work.

“OHCHR received numerous accounts explaining that the climate of fear and judicial harassment has compelled many media and human rights NGOs to self-censorship. In the aftermath of the declaration of the state of emergency, the Government announced the permanent closure of 1,719 human rights, humanitarian, lawyers’ associations, foundations, NGOs, many of which were operating in the South-East.

“Following his visit to Turkey in November 2016, the Special Rapporteur on the promotion and protection of the right to freedom of opinion and expression stated that ‘state of emergency cannot justify the adoption of disproportionate and arbitrary measures representing a severe blow to freedom of expression, media freedom and access to information in Turkey’. In January 2018, Freedom House categorized Turkey as ‘Not Free’ in their yearly global review of political rights and civil liberties due to the effects of the ‘referendum that centralized power in the presidency’, ‘all of which have left citizens hesitant to express their views on sensitive topics.’

“Through Decrees 668, 675, 677 and 683, the Government announced its decision to liquidate 166 media outlets, including publishing houses, newspapers and magazines, news agencies, TV stations and radios. Media outlets were closed on the grounds that they ‘belong to, connect to, or have contact with’ ‘FETÖ/PDY’ (Decree 668 article 2). The closing down of media outlets was accompanied by the confiscation of all their assets, without compensation (based on Decree 668, articles 2 and 3, and other subsequent Decrees).

“Over 100,000 websites were reportedly blocked in Turkey in 2017, including a high number of websites and satellite TVs in Kurdish. Wikipedia was blocked due to a content criticizing the involvement of the Government of Turkey in the conflict in the Syrian Arab Republic. Turkey was reportedly the country that submitted the highest number of requests to Twitter to censor individual accounts.

“Decree 680 introduced several permanent changes to Law 6112 on radio and television; in particular it granted the regulatory authority (the Radio and Television Supreme Council) the right to suspend broadcasting temporarily. The Supreme Council also has the power to cancel altogether the license of a media outlet found to have violated the publication ban order for the fourth time within a year (new article 7, as amended by Decree 680 article 17). The Decree also formulated some new ‘principle’ of coverage of terrorist attacks, using vague language, stating that such coverage should not ‘produce results serving the interests of terrorism’ (Decree 680 article 18).”