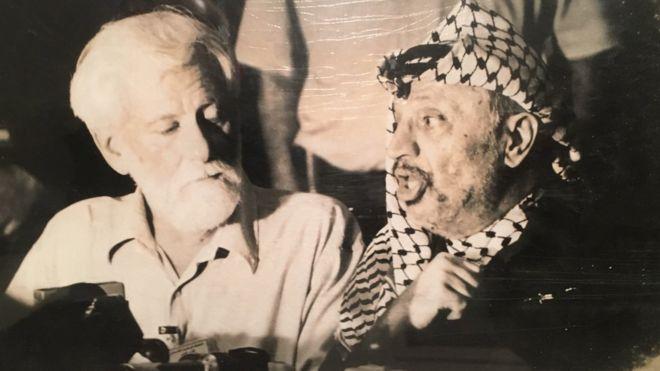 A long line of traffic was snaking its way past barbed wire and concrete blocks in the summer heat of the Lebanese capital Beirut.

Thousands of people were using a day-long ceasefire in the 1982 Israel-Lebanon war to cross the checkpoints that separated the city’s east from west.

Among them was a silver-haired magazine editor, Uri Avnery, who had instructions to present himself at the checkpoint of the Palestine Liberation Organisation (PLO) near the Beirut museum.

Mr Avnery was about to become the first Israeli to formally meet the PLO leader, Yasser Arafat.

He recalls his route to the encounter with his country’s sworn enemy – “a bit dangerous”, he concedes – as he was picked up in an armoured Mercedes before “zigging and zagging” through south Beirut to a PLO house.

“We talked about peace of course, peace between Israel and the state of Palestine,” he tells me.

But the story of meeting Arafat did not end only with a scoop for Mr Avnery’s left-wing magazine.

More than three decades later it has taken a fresh twist – an allegation that Israeli commandos tried to track their compatriot to his rendezvous with the PLO leader, and were prepared to target it.

The Israeli journalist Ronen Bergman wrote about a series of alleged attempts to kill the PLO chief in a recently published book covering Israel’s targeted assassinations.

Mr Bergman interviewed hundreds of protagonists in an area that arouses deep controversy, and whose subject matter remains largely classified in Israel. He says he was accused of “aggravated espionage” by a military chief during his research.

As the siege of Beirut took place in 1982, Mr Bergman writes that an elite commando unit codenamed Salt Fish was set up to kill Arafat.

His account claims the unit decided to take advantage of Uri Avnery’s meeting and let the journalist and his two colleagues unwittingly lead them to the PLO leader.

Mr Bergman writes: “An argument broke out among the Salt Fish team members: Was it right to endanger, and probably kill, the Israeli citizens? The answer, they decided, was that it was.”

But he claims the Salt Fish team lost their trail in the alleys of Beirut.

Uri Avnery remembers well the meeting with Arafat because he “published every word”.

He is now 94 and speaks to me in his Tel Aviv apartment, a shrine to past peace plans with pictures fading on his walls of Arafat, Bill Clinton and the murdered Israeli Prime Minister Yitzhak Rabin.

His interview in Beirut sparked outrage among many Israelis in 1982 and the government ordered an investigation, he recalls.

“The attorney general decided that I had broken no law, because at the time there was no law against meeting with the PLO.”

But what of the claim that his meeting with Arafat could also have cost him his life?

“I have some doubts about it,” he says, explaining that he made the phone call arranging the meeting less than 24 hours before it took place.

“But… if they were very efficient they could have listened [to the phone call], caught me at the point where I crossed the front line and tried to follow our car. It’s possible.”

The head of the Salt Fish unit was Lt Col Uzi Dayan, who went on to become deputy commander of the Israeli military.

He told me his team carried out between eight and 10 attempts on Arafat’s life.

Asked whether civilians died in those attempts, he says: “To the best of my knowledge, no.”

But he adds: “While talking about innocent people, his staff is innocent? No. The wife of one of his officers is innocent? Can think about it. And if [she] brings a child with her?”

“So if we knew that there were [civilians], we didn’t call it a target. But you know war is blind, you can’t say that nobody in this neighbourhood was hurt.”

The ferocity of the Israeli siege of Beirut saw Defence Minister Ariel Sharon stripped of many of his powers by fellow ministers.

Col Dayan is uncompromising about his own missions, recalling the violent deaths of Israelis at the hands of the PLO or its offshoots in attacks launched from bases in Lebanon.

But he denied that his unit was behind the alleged operation described by Ronen Bergman.

He says: “It’s crazy to think that an Israeli officer or an Israeli minister of defence or an Israeli prime minister [would have given] permission to kill Arafat and at the same time to kill some Israelis meeting him, including Uri Avnery”.

He adds: “So that situation, I know nothing about it”.

Col Dayan avoids the word “assassination”, repeating that his goal was for Arafat “not to be alive”.

Years later, when Israel and the Palestinians were holding peace talks, the pair met many times.

Col Dayan says he never talked to the PLO leader about his involvement in the attempts on his life, “but I think he knew,” he adds.