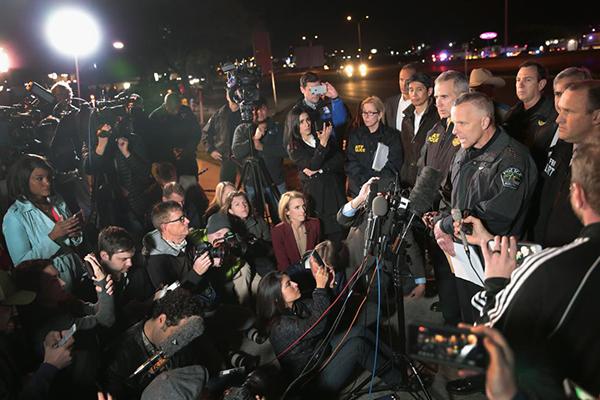 The saga of the Austin bomber, who stirred up terror and anguish in Texas’s capital for the better part of a month, came to a violent end after Mark Anthony Conditt, the suspect, blew himself up in his SUV.

But Conditt’s death on Wednesday did little to dampen concerns from some that the coverage of his bombing spree in the press, and the way it was treated by authorities, featured elements of racial and cultural bias.

Conditt was white, and while not all of his victims were black, he murdered Anthony Stephen House on March 2 and Draylen William Mason on March 12. Both victims came from families that were connected to the city’s black civil rights community. President Trump, who in the past has been quick to post statements on Twitter about violence committed by Islamic extremists, was comparatively reserved about the attacks in Austin. On Wednesday, Trump issued his first and only statement about the bombing spree on the social media platform, congratulating law enforcement for tracking down Conditt.

Referring to a taped confession he left behind, Austin Police Chief Brian Manley suggested in a Wednesday evening press conference that the deceased killer was not a “terrorist” because he did not self-identify as one.

“He does not at all mention anything about terrorism or anything about hate,” Manley said. “Instead, it is the outcry of a very challenged young man talking about challenges in his personal life that led him to this point.”

Many pounced on Manley’s comment and also on the press coverage surrounding the bombings as evidence that, as a white male who targeted people of color, Conditt’s violence was handled more gently than it would have been if the opposite were true.

“Murdering multiple people and being called ‘challenged’ is the height of white privilege,” actor Kumail Nanjiani wrote Wednesday on Twitter.

Nanjiani’s post was retweeted over 18,000 times in less than 24 hours.

Jordan Uhl, a writer and co-host of the podcast Rust Belt to Beltway, pointed out that The New York Times highlighted quotes describing Conditt as “nerdy” and “quiet.” He juxtaposed that with a description used by the Times of Michael Brown, an 18-year-old black man who was shot and killed by a police officer in Ferguson, Missouri, in 2014. The paper referred to Brown as “no angel,” referring to his background.

“White privilege transcends physical and tangible benefits,” Uhl tells Newsweek regarding his frustration surrounding the coverage of race and violence. “It’s embedded in our language. The Katrina coverage was the worst. White victims were ‘finding supplies’ while black victims were ‘looting.’ We have to remain vigilant and self-correct whenever we find ourselves or others using biased language.

Fatima Mann, the co-founder of Counterbalance: ATX, a nonprofit civil rights organization based in Austin, spoke to Newsweek before a suspect in the attacks had been named, and said that they opened familiar wounds to people of color in the city.

Mann told Newsweek on Thursday that she thinks people are right to be angry about the coverage surrounding the bombing attacks. And even if the killer’s confession did not mention a racial motive, the story is still very much about that subject because of who the victims were.

We must call the man who murderd [sic] and injured Black and Brown bodies in Austin a terrorist. We must not allow this incident to select a police chief that was okay w/ making a victim a suspect. @nytimes @BalanceAtx pic.twitter.com/IFWA6Ww92M

“I came into is story saying that Austin was liberal and progressive for white people only,” Mann tells Newsweek. “For us in the community here, we are tired of the people that kill us not being called the terrorists they are.”

Mann says that she believed that the coverage of the Austin bombings was smaller than it otherwise would have been because American culture prefers to focus on issues that impact white people.

“If they were white women, everyone in the world would have known about it,” she adds about the victims.