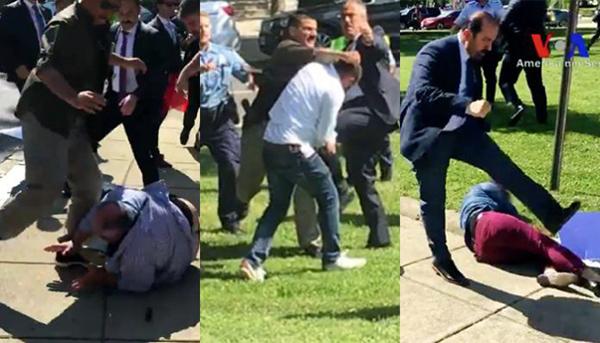 US federal prosecutors have dropped charges against the majority of the Turkish president’s security guards in connection with an attack on protesters during a visit to Washington, D.C., in 2017, according to the RT website, citing a Wall Street Journal report.

Charges were initially brought against 15 of Turkish President Recep Tayyip Erdoğan’s bodyguards, adding to the strain in relations between the US and its NATO ally. But prosecutors have since asked a judge to drop most of those charges, reducing the number of those still facing potential trial in the US to just four.

The first reduction in the scale of the case came in November, when prosecutors called for the dismissal of charges against four members of the Turkish security team. Then charges were dropped against seven more security detail members, including the head of the team, on Feb. 14, a day before then-Secretary of State Rex Tillerson traveled to Ankara for an official visit.

According to the report, Tillerson pointed to the decisions — which hadn’t been publicized or announced — to drop the charges as proof that the Trump administration was willing to address grievances felt by Ankara over American policies.

US officials insist the prosecutors were not pressured to drop the charges for political reasons and that the decisions were motivated by the misidentification of four of the subjects and the lack of sufficient evidence against the others.

The charges brought against Erdoğan’s guards stem from an altercation in May 2017 outside the residence of the Turkish ambassador in Washington. Demonstrators protesting the policies of President Erdoğan, who was visiting Washington for a White House meeting with Donald Trump, were countered by agitated supporters of the Turkish head of state and subsequently attacked by the Turkish president’s bodyguards, footage of the incident showed. Another video clip showed Erdoğan apparently giving the order for his security detail to attack the protesters and watching it unfold outside the ambassador’s residence on Sheridan Circle.

At least nine protesters were injured in the melee as well as one police officer and two members of the Secret Service.

DC Police Chief Peter Newsham called the incident a “brutal attack on peaceful protesters,” and US lawmakers denounced the attack, with some calling on the Trump administration to expel Turkey’s ambassador.

Turkish officials alleged that the protesters attacked a group of supporters of Erdoğan who were also present at the scene and blamed US law enforcement for failing to separate the two groups.

The US attorney’s office told the WSJ it was still pursuing assault charges against four members of Erdoğan’s security detail and two Canadian citizens. Two Turkish-Americans are awaiting sentencing after pleading guilty to felony assault charges related to the same incident.

Relations between the US and Turkey have been strained for years, taking a turn for the worse after a failed military coup in Turkey in July 2016. The Turkish government says it was masterminded by Fethullah Gülen, a Turkish Islamic cleric living in the US. Turkish efforts to have Gülen extradited have repeatedly failed.

The Trump administration’s relations with Turkey were marred by the US decision to arm and train the People’s Protection Units (YPG) militia in Syria, which Ankara considers an extension of the outlawed Kurdistan Workers’ Party (PKK). Turkey responded to the US move by launching an ongoing military incursion targeting the Kurdish enclave of Afrin in northwestern Syria.