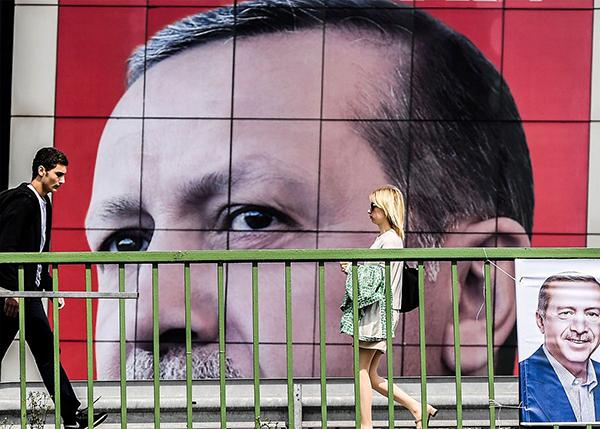 Turkey, already the world’s leading jailer of journalists, is squeezing what little independence is left out of its battered media.

President Recep Tayyip Erdogan’s government is widening the powers of its aggressive radio and television censor to include the internet just as 81-year-old billionaire Aydin Dogan starts talks to sell Turkey’s largest private media company to a group of Erdogan loyalists, ending years of harassment by authorities.

The moves come as Erdogan, in power for 15 years, prepares to cement his control with elections next year that will abolish the post of prime minister and codify what is essentially one-man rule.

Since a failed coup in 2016, the leader of the Middle East’s largest economy has presided over the rounding up of opponents by the tens of thousands, including workers in every branch of government and leading members of the media, academia and the judiciary. Even Miss Turkey has been dethroned and jailed for criticizing Erdogan on Instagram, while just Thursday an actress was sentenced to 10 months for allegedly insulting him from the stage.

“This is very much following the Russian model,” said Asli Aydintasbas at the European Council on Foreign Relations. “Media outlets are all closely affiliated with the government. A few exceptions are tolerated, but marginalized.”

Turkey’s latest efforts to control what 80 million citizens are permitted to see on their computer screens and televisions may affect some of the biggest names in American media.

The assets Dogan is in negotiations to sell include CNN’s Turkish affiliate as well as the country’s leading daily, Hurriyet, and tabloid, Posta. Separately, a law that parliament passed late Wednesday allows the state’s media watchdog, known as RTUK, to vet online broadcasts and possibly block content of both paid and free streaming services like Netflix and YouTube.

A member of RTUK’s governing board, Ilhan Tasci, who was appointed by the main opposition party, said vague wording in the legislation means individuals who are supposed to be exempt from oversight may end up being targeted for posting videos on the web without a license.

“In no developed democracy can the government decide what adults watch,” Tasci said by phone.

Dogan Holding said in a regulatory filing that its negotiations with Erdogan Demiroren’s Demiroren Holding AS are based on a market value for the media assets of $890 million, less than a quarter of the group’s enterprise value at its peak in the mid-2000s. That was before Dogan was slapped with multibillion-dollar fines and forced to unload some key assets.

An ally of Erdogan called the potential transaction a routine commercial event. “There have been newspaper sales before between different groups, including Dogan Group,” said Bulent Turan, deputy whip of his AK Party in parliament. “Newspapers are founded, partnerships are formed, and they’re sold according to free market conditions. This is normal.”

Demiroren’s previous foray into media ended in tears — literally. A leaked recording of a phone call with Erdogan in 2014 revealed him crying as the Turkish leader berated him for the political coverage of one of his newspapers.

“How did I get into this business?” Demiroren says on the call. The 79-year-old tycoon made his fortune in industries ranging from energy and construction to industrial metals and tourism.

Bahadir Ozgur, who spent 13 years at Dogan newspapers, said the company’s problems started in February 2009, when Referans, a business daily that was later shuttered, ran a story about nepotism among Erdogan’s allies in his ruling, Islamist-rooted AKP party.

“It was just about how the sons of ministers had climbed the ladders in business,” Ozgur said by phone. “Dozens of tax inspectors” soon paid a visit, resulting in the astronomical fines on the holding company, he said.

Ozgur, 41, has been out of work since he quit Dogan in June to protest censorship over Turkey’s military’s operation to seize Afrin, Syria, from Kurdish YPG fighters. The Committee to Protect Journalists in December identified 73 jailed Turkish journalists, the most in the world for the second year running.

“There always was censorship and self-censorship at Dogan, but it was always subtle, pinpointed,” he said. “For the first time, we were ordered to do this or that story, using this or that term or expression.”

HalkTV, operated by the main opposition party, has largely been left alone and Fox TV’s nightly news show is by far the most popular and often the most critical, but these examples are outliers.

Thousands of people have been legally persecuted for insulting the president and the owners and editorial leadership of opposition newspapers Cumhuriyet, Sozcu, OdaTV, Evrensel and Birgun have all been jailed, detained or are facing trial. Kurdish media outlets have been ordered shuttered by the dozens. An online startup operating from London, Ahval, was banned within months.

Turkey has also banned or blocked access at times to Twitter, YouTube and Facebook, as well as the virtual private network services, or VPNs, that allow users to mask their locations and skirt the bans. Wikipedia — in all languages — has been blocked for almost a year.

For all of these reasons, global rights group Freedom House, based in Washington, changed its ranking for Turkey this year from “Partly Free” to “Not Free” for the first time.

— With assistance by Taylan Bilgic, and Firat Kozok