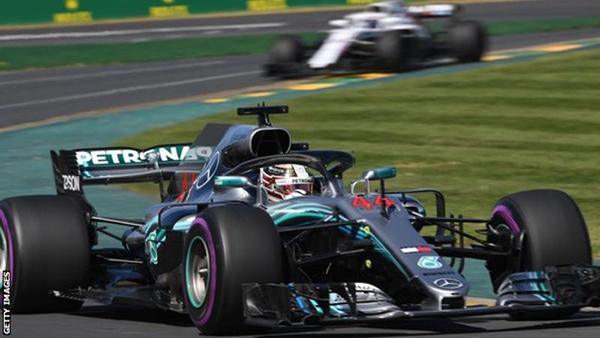 Lewis Hamilton and Mercedes were in imperious form in the first practice session of the new Formula 1 season.

However, the Dutchman did not run the fastest ultra-soft tyre and neither did Ferrari drivers Kimi Raikkonen and Sebastian Vettel in fourth and fifth.

The order of the teams looked very like the impression that had been given by pre-season testing.

Mercedes were in front, followed by the closely matched Red Bull and Ferrari, then a gap to Haas, McLaren and Renault, also covered by fractions, and then Toro Rosso, Williams and Force India.

But it is Mercedes’ pace that will send shivers up and down the pit lane – and perhaps among followers of F1 around the world.

It is early days – too early to draw a firm conclusion – but the metronomic consistency of Hamilton, who set a number of laps all quicker than anyone else, and his advantage over the field appeared ominous.

However, Hamilton has a special affinity with the Albert Park track, where the low-grip track surface, bumpy braking zones and go-karty feel plays to some of his many strengths.

And there was encouragement to be found in Verstappen’s pace on the slower super-soft tyre. And Vettel had a slightly scrappy session in the Ferrari, including running wide on to the grass at Turn 13 at one stage, and did not show his best.

Equally, Raikkonen, the faster of the two Ferrari drivers, set his quickest time on the slowest ‘soft’ tyre, so some of the gap between Hamilton and the Ferrari will also be in the rubber.

Daniel Ricciardo brought up the rear of the drivers from the big three teams, just under 0.3secs slower than team-mate Verstappen in sixth.

Haas have found some speed, McLaren have not

Behind the Australian there was a 0.7-second gap back to Grosjean, confirming the strong form Haas had shown in pre-season testing.

The Franco-Swiss was 0.166secs quicker than Alonso, who was on the super-soft while Grosjean was on the ultra.

The Spaniard was consigned to the pits for the first half of the session with an exhaust problem – one of the many difficulties encountered by McLaren in pre-season testing.

Alonso’s team-mate Stoffel Vandoorne had similar issues, but he, too, got out for the second half of the session and was 10th fastest, behind Carlos Sainz. The Belgian was 0.586secs off Alonso, but using the soft tyre.

Potentially embarrassingly for McLaren, Toro Rosso’s Pierre Gasly was right behind Vandoorne, using the Honda engine McLaren abandoned last season on the basis that they believed it was holding them back.