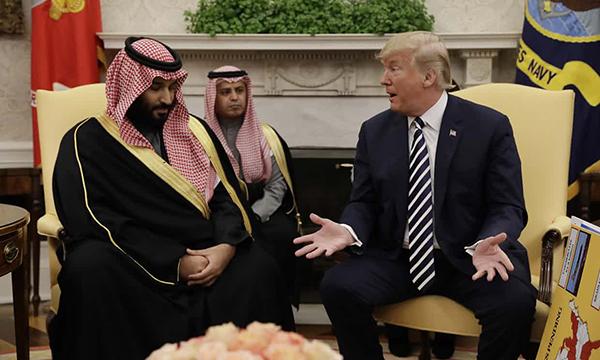 The crown prince of Saudi Arabia, Mohammed bin Salman, has arrived in Washington. Jared Kushner must be very excited!

Prince Mohammed and Kushner are said to be very close, though plotting the future of the Middle East during late-night gab sessions – behavior the two thirtysomethings have been reported to engage in – must be much harder now that Jared has been stripped of his top-secret security clearance.

But the excitement over the Saudi’s visit isn’t limited to Jared. Beginning with a splashy interview on CBS’s 60 Minutes, the crown prince is in the United States to sell the American people on the idea that a new, liberalizing Saudi Arabia is dawning.

But is it true?

There is some justification for optimism. Key reforms have been promulgated, including a royal decree stating that women will be allowed to drive, beginning in June. Uber and Careem, a Dubai-based ride-booking app, have already begun recruiting female drivers. Women can now also join the military, start a business without first obtaining the permission of a male guardian, attend sporting events and retain custody rights over children after divorce more readily.

With the new General Entertainment Authority, the crown prince is also dramatically expanding the Saudi entertainment sector. There are now dance performances, comic book festivals, and monster truck festivals in the kingdom. Greek composer and pianist Yanni performed a series of concerts across the country late last year, and a 35-year ban on cinemas has ended. The government expects 300 movie theaters with 2,000 screens to open by 2030. Already, a public screening of The Emoji Movie has taken place in Jeddah. (I feel bad for Jeddah.)

With driving and entertainment on his mind, it should come as no surprise that Prince Mohammed is slated to meet with both Hollywood producers and Uber executives during his time in the United States.

And that’s the problem. While Prince Mohammed’s limited reforms are fundamentally about liberalizing the social and economic realms of Saudi Arabia, the political realm remains completely off-limits.

What this means is that the reforms on women’s rights, though significant and certainly long overdue, are incomplete. The guardianship rules – whereby a woman requires a male guardian’s approval to travel abroad, obtain a passport, or get married – are still in place, and they remain the most significant impediment to the advancement of women in the kingdom.

This half-measure on women’s rights allows Prince Mohammed to essentially co-opt the courageous movement built by female Saudi activists for women’s rights in the kingdom.

This is unsurprising, really. Saudi Arabia remains an absolute monarchy, and political expression is severely curtailed. Since mid-September of last year, more than 60 prominent activists, clerics, journalists and intellectuals have been detained in what a United Nations panel called a “worrying pattern of widespread and systematic arbitrary arrests and detention”. The government continues to discriminate against its Shia minority. The criminal justice system still fails to provide due process, especially for its foreign migrant workers.

And then there’s the public purge against corruption, when 11 Saudi princes were held last year at the Riyadh Ritz-Carlton on charges of stealing from the public coffers. No one can doubt the need of rooting out graft, but serious questions linger not only about how the detainees were treated but also if the whole affair was more about consolidating the power of Prince Mohammed than anything else.

How Saudi Arabia runs its own affairs is one thing. How it intervenes in the lives of others is another. And since the de facto ruler also holds the portfolio of minister of defense, Prince Mohammed can be held directly accountable for Saudi Arabia’s foreign policy, which is disastrous.

From Palestine to Qatar and beyond, the grand Saudi plan for the Middle East is failing. Nowhere is this more devastating than in Yemen.

A UN official has described the situation in Yemen as looking “like the apocalypse”. The three-year war between Houthi rebels and forces loyal to the exiled president has killed more than 10,000 civilians, including 68 killed in two air raids carried out by Saudi-led forces in one day last December. The Saudi-led coalition has at times blockaded the ports of the country, depriving its people of humanitarian aid. More than a million people are suffering from cholera, provably the worst outbreak of the disease the world has ever known. Around 8.4 million people, about a third of Yemen’s population, are starving.

Prince Mohammed has come to the United States not to seek political solutions to this crisis but to buy more weapons to prosecute his war. And the Trump administration is fully behind his decision. How can we expect Trump to care about poor Yemen, anyway? Rather than compassion over Yemen, the administration doles out fear. Yemen, of course, is one of the countries currently on the Muslim travel ban list.

Saudi Arabia often comes up for criticism, and frankly some of it is grossly Islamophobic, demonizing the country as a way of vilifying all Muslims. As with any other nation, Saudi Arabia should be judged on what it does, not on what it may symbolize to the critic.

And what Prince Mohammed is now doing in Saudi Arabia, besides following a disastrous foreign policy, is consolidating his power while hoping the spectacle of entertainment will keep his people from demanding deeply needed political change. In too many ways, Prince Mohammed sounds suspiciously like Jared Kushner’s father-in-law. No wonder Kushner and Prince Mohammed are friends.