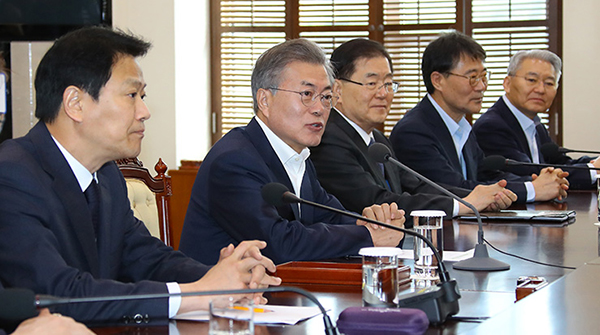 President Moon Jae-in on Wednesday floated the possibility of a three-way summit among the two Koreas and the United States.

“Holding a North Korea-U.S. summit following a South-North Korea summit itself is a historical event. And depending on their outcomes, they may lead to a three-way summit of South, North and U.S.,” Moon said while attending a meeting of Seoul’s preparation committee for the upcoming inter-Korean dialogue, held at his office Cheong Wa Dae.

“We must completely resolve the issues of denuclearizing the Korean Peninsula and establishing peace through these upcoming talks and others that will follow,” he added, according to Cheong Wa Dae pool reports.

Moon is scheduled to hold a bilateral summit with North Korean leader Kim Jong-un late next month, while U.S. President Donald Trump said he will meet Kim before the end of May.

The historic summits were arranged by a group of Moon’s special envoys who traveled to the communist North on March 5-6.

The South Korean president told the preparation committee to clearly show what North Korea, as well as the U.S., will gain through a peaceful resolution of the North Korean nuclear issue.

“I ask you to make preparations so that we can show and persuade, from an objective point of view, how the South, the North and U.S. may each benefit and how they may exchange such benefits,” he was quoted as saying.

Still, their objective and how to achieve that may be very clear, he said.

“Though it is an unexplored path we have never walked, we have clear plans and a clear vision of goals we seek to achieve through an agreement between the leaders of the South, North and the U.S.,” Moon said.