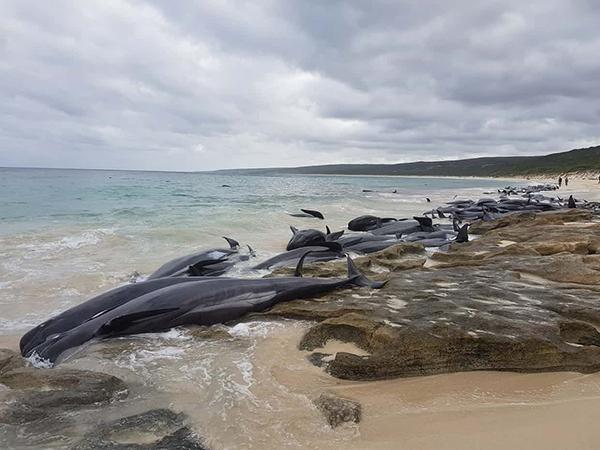 More than 150 whales have washed ashore in Western Australia, of which about 75 have died.

A rescue operation is under way in Hamelin Bay, near the town of Augusta on the state’s south-western tip, with volunteers and vets trying to keep the surviving short-finned pilot whales alive before deciding when to herd them out to sea. About 50 of the whales are on the beach and 25 are in the shallows.

One witness described trying to steer one of the animals out to sea, only to watch it beach itself again.

Jeremy Chick, who is controlling the rescue attempt, said the main priorities were to ensure the welfare of the remaining live whales and the safety of everyone involved in the operation before any rescue attempt was made to herd the whales back out to sea.

“The strength of the animals and the windy and possibly wet weather conditions will affect when and where we attempt to move them out to sea,” he said.

People were asked to avoid the area because rescuers had enough staff there.

Authorities warned the public to take care near the water because the dead and dying animals could bring sharks closer to shore. A three-metre shark was seen in the bay within a few hours.

Hamelin beach is closed from Hamelin Caravan Park to North Point including Grace Road and Reserve Road, and a shark alert has been issued for the area.

The largest mass stranding of whales in WA happened in 1996 when 320 long-finned pilot whales stranded themselves in Dunsborough.

Short-finned pilot whales inhabit tropical and subtropical waters and may be seen in the hundreds but groups usually number fewer than 100.

On Friday, the whales were first spotted by a commercial fisherman at 6am on Friday.