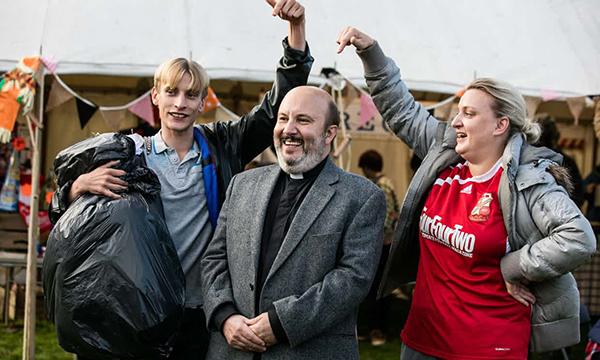 Young people rejecting religion is not bad news for Christianity: the faith needs to embrace its weirdness and mystery

‘Some parts of the church that tend to reject the trappings of religion have tried desperately to appear ‘normal’.’ Image from the BBC comedy series This Country. Photograph: BBC/Sophie Mutevelian

It’s quite a statement. “Christianity as a default, as a norm, is gone, and probably gone for good,” said Prof Stephen Bullivant this week, in response to figures showing widespread rejection of Christianity among Europe’s young people. He adds a slender caveat: “Or at least for the next 100 years.”

Plenty of people will find all this to be cause for celebration. It’s like a Philip Pullman fantasy made real: the young people of Europe casting off the deadening, corrupting, malignant influence of religion. They appear to be putting that ancient, feeble entity called God out of his misery. It could be seen as a sloughing off of superstition, a thrilling engagement with reality and reason. And yet I suspect the truth is a little more complex.

At the risk of sounding in denial, this may not be entirely bad news for Christianity. Arguably one of the most toxic developments in the history of the faith was its shift from being a radical political and spiritual movement to allowing itself to be co-opted by forces of oppression and militarism. Becoming a default or norm effectively drained it of much of its energy.

There have, of course, been countless Christians through the centuries who have resisted this, but the institutionalisation of Christianity as a whole has done it a great disservice. The move over the past few decades into a post-Christendom world is one we should surely embrace if we want to see the faith re-energised.

Rather than being just a slightly rubbish version of the world, maybe the church needs to embrace its weirdness

It would also be a mistake to draw from this survey any conclusions about a change in the nature of young Europeans. For example, the widespread interest in extraordinarily elaborate fandoms is surely evidence that today’s under-30s are quite as ready as their ancestors to commit themselves to imaginary causes and bewildering rituals; there are many who protect the lore of Star Wars and Game of Thrones with all the fervour of a medieval bishop, and those deemed to be acting contrary to received dogma receive the 21st-century stocks treatment on social media. This may seem like a trivial point, but it does suggest a continuing appetite for community, loyalty and a sort of tribalism that has long been associated with religious belief. Young people are not all the self-obsessed commitment-phobes of common caricature.

And those of an older generation hopeful that spurning religion means rejecting irrationality may be taken aback by a supposed recent renaissance in, of all things, astrology, along with what Lucie Greene of marketing firm J Walter Thompson calls a “reframing of new age practices, very much geared toward a millennial and young Gen X quotient”. One theory is that many young people shun the more arid extremes of rationalism, where everything is numbered and quantified, and all life and culture is squashed and processed into data. Maybe empiricism has had its day. And as the sociologist Linda Woodhead has noted of young Britons with no religion, relatively few describe themselves as atheist.

There is an irony here that a core part of the church’s message surely remains worthwhile. The Church Times has been running a revealing series of articles about young people in British churches. An 18-year-old called Sherlon is quoted as saying: “How society says you have to be is the main thing. You have to wear this, like this; you have to be popular. Also bullying and stuff: that is massive. Judging people because of how they look. And jealously — everyone wants to be perfect, but they don’t realise that no one is perfect.”

This is where an effective church can offer comfort and reassurance, emphasising that everyone is loved, and is of the same inherent value, just as they are. It’s not about perfect selfies and Instagram likes and exam grades and money and status. This is a message today’s young people need to hear.

In the past few decades, some parts of the church that tend to reject the trappings of religion have tried desperately to appear “normal”. But for a generation that prizes authenticity, maybe that’s just a turn-off. Rather than being just a slightly rubbish version of the rest of the world, with slightly rubbish coffee and slightly rubbish music, maybe it needs to embrace its difference, its strangeness, its weirdness, its mystery. Christianity as a norm, gone for good? Maybe that’s good news for everyone.

What is a woman capable of? ‘There’s a lot to discover,’ says Angelina Jolie

Why do we buy into the ‘cult’ of overwork?